If you were to rub your hand on a smooth desk, you'd get a much different feeling than if you were to rub it up against sandpaper. The thing is, the motion you exert on the smooth desk and the sandpaper is exactly the same. However, you feel completely different sensations - a smooth desk versus rough sandpaper. The reason for this is because you have a lot of different specialized nerves located in your body that are able to sense differences in things like pressure, vibration, touch, and temperature.

Some of these nerves can do more than one of the things I just mentioned. They all have slightly weird names, but their functions are all really cool. 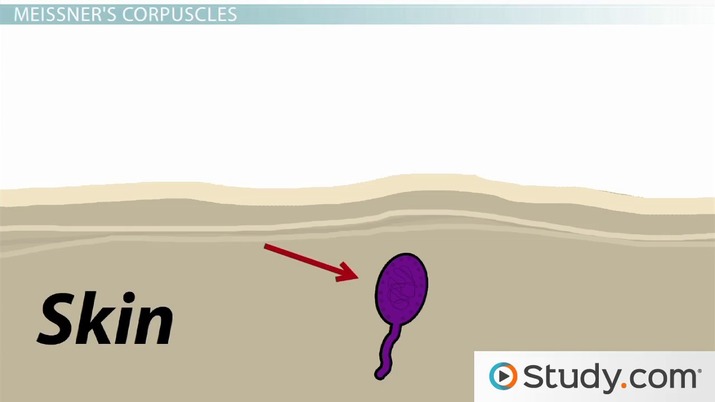 Coming up next: Sensory Nerves and Receptors of Muscles and Tendons

If you recall, afferent nerves are the nerves that are responsible for sensing a stimulus and sending information about the stimulus to your central nervous system. The afferent nerve endings that sense stimuli originating from outside of the body, such as touch, vibration, pain, vision, and sound, are called exteroceptors. 'Extero' in exteroceptors implies something from the outside. 'Ceptors' is a shortened form of receptors. Receptors are nothing more than endings on afferent nerves that respond to certain stimuli.

One of the subgroups of these exteroceptors are receptors that respond to external mechanical stimuli, such as touch, pressure, and vibration, which we appropriately call mechanoreceptors. There are quite a few mechanoreceptors in our body's largest organ: the skin. They include Pacinian corpuscles, Meissner's corpuscles, Ruffini's end organs, and Merkel's discs.

Pacinian corpuscles are only able to tell when pressure has begun and ended. For example, when you just press your finger against your skin or just let go, Pacinian corpuscles send action potentials up to your brain about the sensation of pressure.

However, Pacinian corpuscles are not responsible for the sensation of prolonged pressure, such as when you keep holding your fingers against your skin; the role of sustained pressure sensation falls to nerve endings called Merkel's discs.

Another type of mechanoreceptor located in the skin that is sensitive to light touch and vibration is called a Meissner's corpuscle. Meissner's corpuscles are sometimes called tactile corpuscles, 'tactile' referring to the sense of touch they are responsible for. These nerve endings are located just beneath the skin in very sensitive areas like your lips and your fingertips. The fact that they are superficially located may help explain why they deal primarily with the sensation of light touch, like a feather brushing up against your skin.

Thankfully, these receptors are very quickly activated and deactivated. Deactivation is quite important, for the light touch of your clothing, so to speak, would constantly bother you if it weren't the case. But, because Meissner's corpuscles are quickly deactivated, you eventually stop feeling the clothing on your skin. It would take the removal of your clothing to once again activate these superficial receptors.

In addition to touch, pressure, and vibration, there are mechanoreceptors responsible for the sensation of the stretch of your skin, sustained pressure on the skin, and the perception of heat. These receptors are called Ruffini nerve endings, sometimes referred to as bulbous or Ruffini corpuscles.

Like the Merkel's discs, Ruffini endings are able to perceive the sensation of prolonged pressure applied to the skin. For example, if an annoying little brother was to poke your shoulder but not let go, it would be the Ruffini nerve endings and Merkel's discs that would give you a sensation that your little brother has not yet let go.

In addition, Ruffini endings are able to tell when your skin is stretched due to things like that annoying little brother pinching your skin or your joints moving up and down and stretching the skin as they do so. Finally, Ruffini endings are able to sense heat or warmth. Thus, they are, in a sense, thermoreceptors as well, 'thermo' in thermoreceptors being a root word for 'temperature.'

Krause's end organs are located in many places, including the mucous membranes, which includes your lips and the inside of your mouth. Basically, it's these guys that help you enjoy the cool sensation of an ice cube in your mouth on a really hot summer day.

There were quite a few terms thrown out here, so let's review them all one more time.

Exteroceptors are the afferent nerve endings that sense stimuli originating from outside of the body, such as pain, touch, vibration, temperature, and sound. One type of exteroceptors are known as mechanoreceptors, which are receptors that respond to external mechanical stimuli such as touch, pressure, and vibration.

Finally, a thermoreceptor that is responsible for the sensation of cold temperature is known as Krause's end organ.

Structure of the Eyeball | What are Eyes Made Of?

What is a Hematoma? - Definition, Types, Symptoms & Treatment

Arm Muscle Anatomy & Diagram | What are the Parts of an Arm Muscle?