In a series circuit, the current flows through each component since there is only one path where the current can flow. Explore the properties of voltages in series circuits and learn how to calculate voltage drops using Ohm's law. Updated: 01/19/2022
Create an account

Imagine that you had to power a cart through a roller coaster by peddling a stationary bicycle. Sounds fun for your friends, but pretty miserable for you! The track starts at a high elevation, goes down hill, and then back up to where it started. Along the way, the track has rough patches resisting the movement of the cart.

This is an analogy for how a series circuit works. The track is the wire, the cart is the current flow, the rough parts of the track are resistors, and you pedaling the bicycle are the battery. Let's flesh out this analogy with an in-depth study of a series circuit. 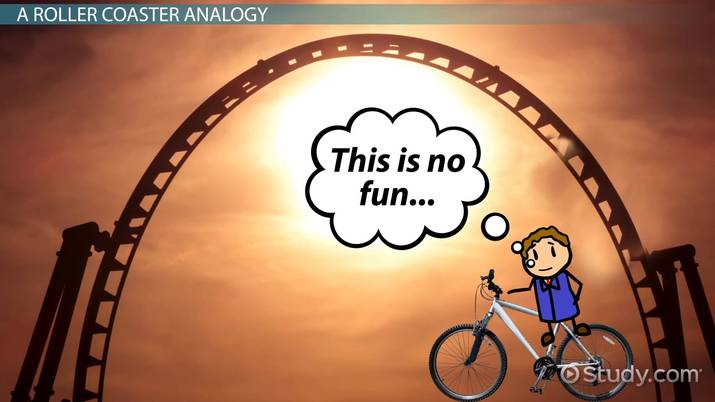 Try it now
Back
Coming up next: Parallel Circuits: Calculating Currents with Ohm's Law

The battery pushes the current from the positive terminal through each resistor and back to the negative terminal. In the roller coaster analogy, you wouldn't have to pedal when the cart leaves the top of the roller coaster: gravity does the work for you. Electrical current naturally moves from high potential to low potential too, but it's electrical potential. You and the battery have to do work to make the cart and the current move from low potential back to high potential. This next diagram shows the potential difference of the battery and the resistance of each resistor:

Ohm's law is the equation V = IR, where V is for voltage in volts, I is for current in amperes (or amps, or A) and R is for resistance in ohms (or Ω). We can't use this equation alone because we don't know the current through the resistors. This is where Kirchhoff's rule comes in.

Voltage is a change in electric potential. If we start and stop at the same location in a circuit there's no change in voltage. It is like the cart moving through a flat section of the roller coaster track. The change in elevation is zero. In formal physics language, Kirchhoff's loop rule states that in a closed loop, the change in voltage is zero.

We have to trace a path (remember that there's only one) through the circuit and then write the voltage for each resistor and battery along the path. When we move in the direction of current flow, the voltages across the resistors are negative.

Going from the negative terminal of the battery to the positive terminal is an increase in voltage, so it's positive. Adding all of these voltages and setting it equal to zero will allow us to solve for the current in the circuit. Let's analyze our example circuit to determine the change in voltages across each resistor.

This next diagram shows the loop which we will follow in the circuit analysis:

Starting from the red dot, we move along with the current to the right and we reach the 20Ω resistor. The voltage across this resistor is negative since we're moving from the high potential side to the low potential side and is represented by -20I. We do the same thing for the other two resistors. This next diagram shows the voltage equation for each resistor:

Now we can go back to each resistor and plug in the amperage into its voltage equation as shown in this next diagram:

Ohm's law is V = IR and Kirchhoff's loop rule states the sum of voltages in a closed loop must equal zero. Each voltage is negative across a resistor in a series circuit because the resistors use the electrical energy provided by the battery. When moving in a loop around the circuit starting from the positive side of the battery, each resistor's voltage is -IR, and the battery is the positive value of its voltage. Adding all of these voltages will give an equation with I as the only variable. This is how the current value is determined in the circuit, which can be plugged back into IR for each resistor to get its voltage drop.

Electric Current Equation & Application | What is Electric Charge Measured in?

Electric Current Equation & Application | What is Electric Charge Measured in?