Tisha is a licensed real estate agent in Texas. She holds bachelor's in legal studies and a master's degree in criminal justice.

Serology is the study of blood and other body fluids. Explore the tests and techniques used in serology and understand the purpose of performing these tests. Updated: 01/19/2022
Create an account

Before learning about the different tests used in serology, it's important to learn what serology is. Serology is the practice of studying bodily fluids and applying that study to particular crimes. The bodily fluids we study in serology include blood, semen, and saliva. A forensic pathologist must determine if one of these bodily fluids is present while conducting an investigation of a crime.

For example, suspected fluids (including stains) may be found on a homicide victim's body and clothing. These will be tested to determine if they are biological in nature. If they're bodily fluids, then they will be processed further to determine who they belong to. This may help catch a perpetrator. 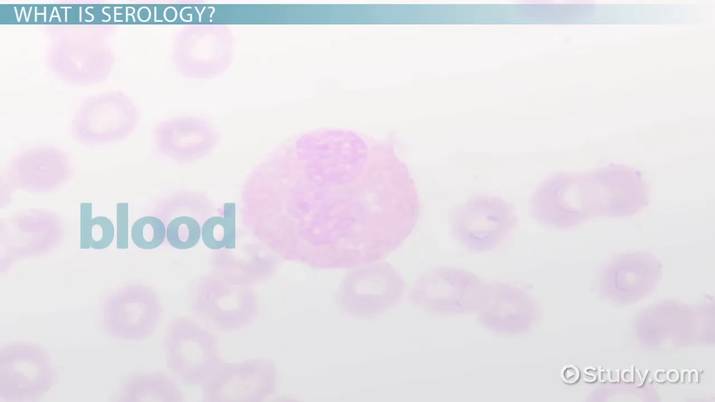 Saliva is the one fluid we'll discuss that only has one possible testing procedure. This test does not have a name; it simply involves placing the suspected saliva in a mixture of iodine and starch. If only iodine and starch are mixed, they will create a deep purple color. When saliva is introduced to the mixture, the color will begin to fade. So, say a small stain was found on the collar of a victim's blouse. It's suspected to be saliva, but has already dried. The stained piece of fabric can be placed in the mixture of iodine and starch to determine if saliva is actually present.

Semen is a bodily fluid whose presence can be confirmed through two specific tests. A UV light can be held over suspected semen. Since semen will turn fluorescent under UV lighting, the UV light allows us to see semen if it's there. In another test, the suspected semen can be touched with a solution of acid phosphatase. If semen is present, the color will change to purple. Both of these tests can be performed on stains and actual fluid. For example, a medical examiner may gather suspected semen during a sexual assault exam and touch it with a cotton swab dipped in acid phosphatase. The same medical examiner may also see a dried-up spot on the inside of a victim's thigh and simply shine a UV light over the spot to see if it fluoresces.

Finally, there are a few tests that determine the presence of blood. These include the use of Kastle-Meyer, Leucho-Malachite Green, and Luminol solutions. Each of these will cause a different reaction when met with blood. The Kastle-Meyer solution will turn pink, the Leucho-Malachite solution will turn blue-green, and the Luminol will glow when it makes contact with blood. For Luminol to glow, it must be sprayed on a suspected stain and then viewed under darkness. For example, a crime scene may have large areas where there seems to be blood. A detective could spray Luminol on the spots, turn off the lights, and see if the spots glow. If they do, blood may be present.

Why Perform These Tests?

All these tests do is simply determine the presence of bodily fluids. If bodily fluids are found, they can be used to extract DNA, which may identify a perpetrator. If it does not identify the perpetrator initially, the information can be placed in a database to be matched to other crimes later on if the same perpetrator commits crimes multiple times.

In these tests, preservation is important. One way to preserve evidence like bodily fluids is the smear method. In this method, the bodily fluids are suspended in another fluid. That fluid can be placed on a slide later on and viewed under a microscope. Bodily fluids may also be scraped or sucked from a surface, such as when the sample is already dry. In either method of preserving the fluid, it may be later smeared onto a slide and viewed under a microscope.

Research Purpose & Examples | What is Research?