Migration from rural to urban areas increased as basic services became available in cities during the 18th and 19th centuries. Learn to define the concept of urbanization and discover how the availability of consumer and public services influenced this shift in the migration of people from farms to urban settlements. Updated: 10/28/2021
Create an account

One of my sister's and my favorite things to do is to drive into New York City for the day. Sometimes we go to see a Broadway show, other times we simply spend the day in Central Park. Since my sister likes to shop, some days she drags me along from shop to shop. Although these days can get a little long for me, I am continually amazed at all the products and services that can be found on the city streets. In today's lesson, we'll take a look at some of these goods and services as we step back in time to take a look at early urban areas.

For starters, let's define the word urban. Urban simply means having the characteristics of a city or town. Opposite of urban is the term rural, having the characteristics of the countryside. As the Industrial Revolution swept across Europe and America, cities began to burgeon as people moved from rural areas to urban ones. Very fittingly, this is known as urbanization.

Before urbanization, much of the world's population lived in rural areas. These rural areas were full of cottage industries, or businesses or manufacturing systems operating in a person's home.

However as the Industrial Revolution, an era spanning from the 18th to 19th century in which the worlds of Europe and America moved from predominately rural to urban began, cities started offering services not found in rural areas. For the remainder of this lesson, we'll take a look at these services in the areas of consumer and public services. We'll first take a look at consumer services. 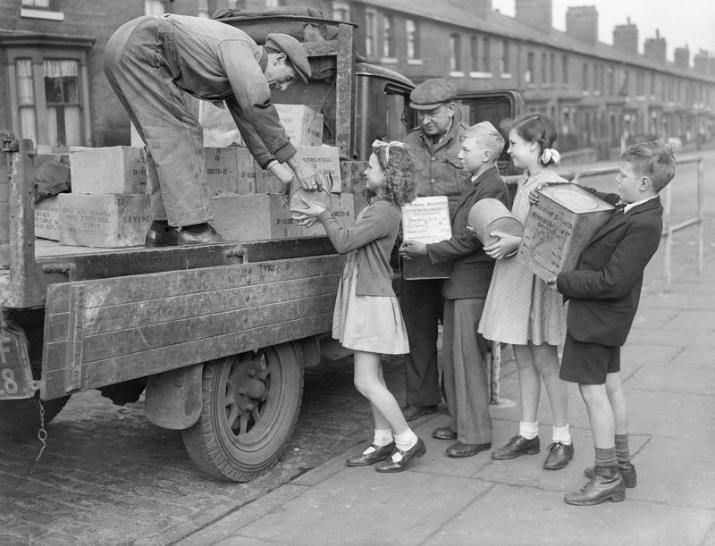 Consumer Services and Division of Labor

As urbanization caused city populations to boom, consumer services also took off. Many historians argue that this was due to the division of labor, the assigning of different parts of a manufacturing procedure or tasks to different people in order to improve efficiency and productivity. Explaining this more simply, when people lived in the countryside, they were often rather self-sufficient. A farming family not only plowed their own fields, they often fixed their own plows, and often made their own clothes. After all, they couldn't just drive down to the local super store and pick up a shirt and a new set of wheels.

However, as the division of labor occurred, many farmers left their fields for the promise of better pay in the big city. Once there, most were hired for specialized employment. In other words, some became factory workers, some became businessman, some became clothiers and so on. As generations passed, those who specialized in banking often lost their handyman skills, while factory workers had no clue how to sew. Therefore, the need for services, things like banks, handyman and clothing shops, took off in early modern cities.

Today, all one needs to do is walk down a city street to see how huge and specialized consumer services have become. For instance, Philadelphia is famous for its Jeweler's Row, a whole section of the city that is full of jewelry stores.

If one comes home from shopping for bling on Jeweler's Row and finds leaky pipes in his basement, all he simply needs to do is type in plumber on his phone and dozens and dozens of local handymen will pop up.

Urbanization also saw a huge rise in the need for public services. Stated rather simply, a public service is a service provided by a government to its people. Some examples of public services in today's cities are access to running, potable water, and electricity. Modern governments have also added welfare systems or systematic programs that provide assistance to needy individuals and families. These welfare systems extend over both urban and rural areas.

Unlike contemporary cities, early modern cities did not often offer these services. In fact, the U.S. welfare system didn't really start to take shape until the 20th century.

As for public services, most all early cities offered police forces to maintain order. However, when it came to things like supplying access to heat or potable water, many early modern city tenements, or a property held by a person or entity that is rented to others, were not heated.

Prior to urbanization, cottage industries, or businesses or manufacturing systems operating in a person's home were very common place. As the Industrial Revolution (an era spanning from the 18th to 19th century) spread, division of labor (the assigning of different parts of a manufacturing procedure or tasks to different people in order to improve efficiency and productivity) became rather normal.

Many historians argue this created the need for both consumer and public services. Consumer services are the variety of services provided to consumers of a product by the field that creates, markets, or provides the product, while a public service is a service provided by a government to its people.

Unlike many early modern cities, today's city governments offer access to things like potable water and electricity. This was rarely seen in the city tenements, or a property held by a person or entity that is rented to others, of early cities. Today's modern governments also offer welfare systems or systematic programs that provide assistance to needy individuals and families.

After the video, your goal should be to:

Types of Land Use Overview & Examples | What is Land Use?