Kent is an adjunct faculty member for the College of Business at Embry-Riddle Aeronautical University and has a Master's degree in Technical Management.

The session layer of the open systems interconnection (OSI) model is responsible to set up, manage, and maintain communicative sessions in networking. Explore the OSI model and understand the session layer and its functions and protocols, and also learn about the other layers of the OSI model. Updated: 10/13/2021
Create an account

What Is the Session Layer?

Say you are planning and hosting a large party. Initially, the problems are minor—like small issues with the food or party favors—but as the party activity increases, time and management become critical. To manage the event and keep your party on track, you need additional helpers to interface with the caterer, florist, and baker. With the setup problems solved, the helpers continue providing assistance by giving management support ensuring each activity runs smoothly. At the party's conclusion, the helpers aid in cleaning up, closing party facilities, and terminating connections.

You may be wondering what a party has to do with networking, particularly the session layer? We can make a comparison between setting up, managing, and closing the party with the functions performed by the session layer, which is layer five of the seven layers comprising the Open Systems Interconnection (OSI) model. 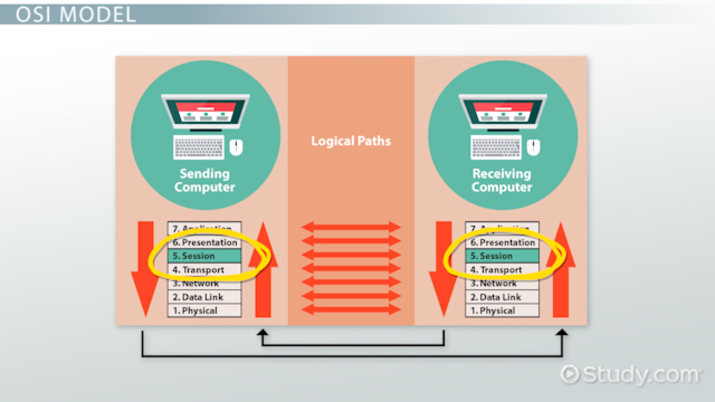 Coming up next: Transport Layer of the OSI Model: Functions, Security & Protocol

What Is the Open Systems Interconnect Model?

Before we can begin our session layer discussion in greater detail, we need to look into the networking environment in which the session layer exists: the OSI model. The OSI model has seven protocol layers, with each layer performing a specific and supportive communicative task. For a brief recap, let's go over each of the layers from top to bottom:

Here, we see an illustration of data flow to and from the sending and receiving computers on a network. As seen here, the session layer provides communicative support to the OSI model's presentation (6) and transport (4) layers.

Networking is defined as a grouping of two or more computers being linked together to exchange data. As layer 5 of the OSI model, the session layer is primarily responsible for setting up and managing communicative sessions, thereby enabling the sending and receiving of data for an undetermined length of time—similar to a telephone call. Additionally, the session layer is responsible for terminating sessions between software processes.

As was the case with our party helpers, the primary responsibilities of session layer protocols (our helpers) are to set up, control, maintain, and close communicative sessions. Common session layer helpers are often referred to as application programming interfaces (APIs).

A common example of an API is the network basic input/output system (NETBIOS), which allows applications on separate computers to communicate and establish sessions to access shared resources over a local area network (LAN). Another example is the use of transfer control protocol/internet protocol (TCP/IP) suite that makes up the transport layer in the OSI model, which standardizes communications across networks. APIs such as these are of primary interest to programmers and developers of application software for completing network communication setup and simplifying management.

As part of the OSI model, the session layer determines what format will be used for data exchange between the engaging nodes on a network. As long as the established format is in place, the communications channel will maintain an open status. Looking back at your party, you had to set up a session (the party) by arranging and managing session formats with items such as the guest list, party favors, food, flowers, and baked goodies. Since you had helpers (APIs), you were able to control the environment, had a great session (party), and closed related activities gracefully.

Six of the more popular session layer protocols used to handle service requests (program commands) and their associated replies include:

This graphic shown here illustrates two host computers using one or more of these protocols to process commands.

When programming session layer functionality using the protocols we have identified, programmers must pay strict attention to established session layer guidelines. By doing so, they ensure the data format and structure is acceptable by the presentation layer (6) and the transport layer (4).

Let's review what we learned. In networking, the open systems interconnection (OSI) model has seven layers that each do a specific and supportive communicative task. From top to bottom (layers 7 to 1), they are the:

We focused on the session layer, the fifth layer, which is responsible to set up, manage, and maintain network communicative sessions. We also learned about common session layer helpers called APIs. APIs like NetBIOS and TCP/IP determine structure and format guidelines supporting presentation (6) and transport (4) layer programming by network engineers.

Finally, we talked about the popular session layer protocols used to handle service requests and their associated replies. These included:

Watch the whole lesson, review it thoroughly, and then see if you're ready to:

What is LISP in Artificial Intelligence?