View bio
Ernest Hemingway thought so much of the importance of ~'The Old Man and the Sea's~' setting that he included it in the title. In this lesson, you'll learn more about the setting of the novella and why it's important. Updated: 09/17/2021
Create an account

Think about your favorite book. Maybe you like Harper Lee's To Kill a Mockingbird, or perhaps you favor J.R.R. Tolkien's The Lord of the Rings. Compare it to Ernest Hemingway's famous novella, The Old Man and the Sea, and you'll immediately notice an important difference: it's in the title.

Hemingway placed so much importance on the setting, or surroundings where events take place, of his book about the aged fisherman's struggle with his great catch that he gave it permanent placement in the title itself. Hence the title, The Old Man and the Sea.

Though the opening and closing of the novella show the characters in a small fishing village, the bulk of the story is presented during the fisherman's struggle on the sea in his small boat. Hemingway takes great pains to describe the fisherman's surroundings, calling the water ''dark blue'' and ''almost purple'' and describing the fish jumping through the current.

This setting makes for great storytelling as the old man battles for the fish while having to fight with the elements, as well as the sea itself. Much of Hemingway's description of the old man is based on his interactions on, and with, the sea. It's extremely important to the story, which is why it's included in the title. 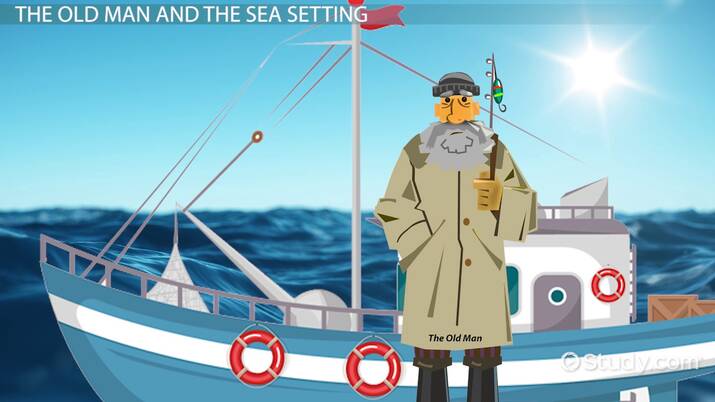 Coming up next: The Old Man and the Sea Book & Film Comparison

Importance of the Sea

Hemingway's attention to the sea, as we've noted, is apparent from the very beginning, and we can't understate its importance to the novella. Why is the setting so significant in this text? Here are some possible reasons:

Secondary Setting of the Story

A secondary setting in the novella is the fishing village that readers see at the beginning and end of the tale. This is where the old man retreats to after his days on the water and where we see much of the interaction between him and his young apprentice. But the village's income relies on the sea itself, so we can see that even when the action is taking place on land, the sea plays an important role.

All right, let's take a moment or two to review. Ernest Hemingway's setting, or surroundings where events take place in a story, for The Old Man and the Sea is clearly conveyed, even in its title. Though parts of the book are set in a small fishing village, the majority of the tale takes place on the sea. Through the setting of the sea, we encounter the fisherman's life, experiences, struggles, and primary relationship.

The sea's importance is made clear in several ways, from the fact that it's the fishing village's main source of income to its role as a central character in the book, representing the story's primary relationship between the old man and the water. And symbolically the sea is important because it shows us many of the themes of the book, including man's struggle against nature, isolation, the vastness of nature, and even hopefulness and possibility.

The Old Man and the Sea Writing Activity

For this activity, you will respond to the following short-answer essay questions about The Old Man and the Sea. Write 2-3 well-developed paragraphs for each question, and make sure to include text evidence whenever possible to support your answers.

Throughout The Old Man and the Sea, Santiago struggles with the sea and other elements of nature. At the beginning of the novella, it is revealed that the old man has gone 84 days without catching a fish. This means that for nearly three months, the old man, who is a fisherman, has been defeated by the sea.

Toward the end of the novella, Santiago is once again bested by nature. After he catches the magnificent marlin, sharks come along and devour his impressive catch. Once again, Santiago faces defeat, and he returns home empty-handed. However, the old man does not see his losses as defeats. He says that "a man can be destroyed but not defeated." This suggests that although the sea defeated him physically, it did not defeat his spirit.

Setting of The Old Man and the Sea: Description & Importance
Related Study Materials

Narrative Point of View in The Old Man and the Sea

Why is The Old Man and the Sea a Classic? - Literary Significance

Theme of Friendship in The Old Man and the Sea

Themes of Struggle & Suffering in The Old Man and the Sea

Santiago as a Tragic Hero in The Old Man and the Sea: Fatal Flaw & Examples

Symbolism of the Marlin in The Old Man and the Sea

Santiago's Dreams in The Old Man and the Sea: Symbolism & Examples

Man vs Nature in The Old Man and the Sea: Examples, Symbols & Power

The Great Joe DiMaggio & Baseball in The Old Man and the Sea: Symbolism & Use

The Old Man and the Sea by Ernest Hemingway | Summary, Symbolism & Analysis

Ernest Hemingway's Writing Style in The Old Man and the Sea

Through the Looking Glass: Themes & Analysis

What is the Significance of the Title Sons and Lovers?