When you hop on the interstate and travel in one direction for several hours, you often spend the majority of your time passing long rows of crops. Whether it is corn fields in the Midwest, orange groves in Florida, or vineyards in Northern California, large fields of crops cover great swathes of the American countryside. Large-scale farming is a fixture of the American landscape, something so commonplace many people never think twice about it. What many people don't realize, however, is that even the ability to plant a few crops, let alone the billions planted in America each year, is a relatively recent skill of humankind, when considering our approximately 2-million-year history. 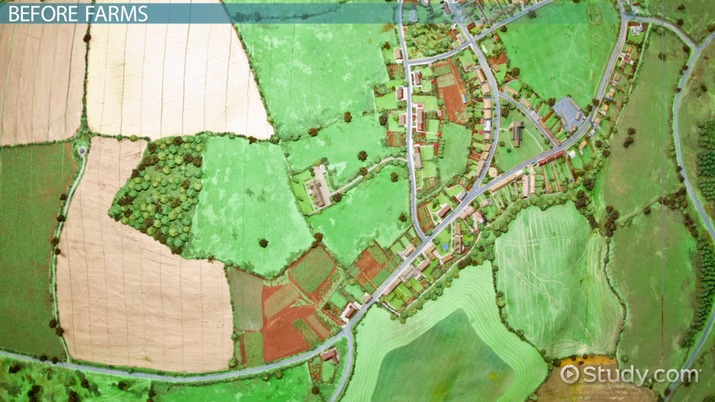 Coming up next: Sun Tzu's The Art of War: Summary & Quotes

Prior to the development of agricultural practices, most communities of humans were hunter-gatherer societies. They were smaller, largely nomadic groups of people who roamed the land foraging for wild berries, fruit and nuts, while also hunting whatever animals they could find for protein. Around 8-10,000 B.C. humans began planting and growing the wild plants which they had been foraging, allowing for more reliable and predictable food sources. Historians and archaeologists have proposed numerous theories as to how, why and where this first occurred, with the main point of contention being whether humans ended their nomadic lifestyle before domesticating crops or vice versa.

However, settled agriculture and the proper domestication of crops likely occurred first in Mesopotamia, in an area in the Middle East called the Fertile Crescent. The development of agriculture came at different times in different parts of the globe. For example, agricultural practices advanced enough for sustained settlement did not develop in the Americas until much later than it had in Mesopotamia, approximately 3,000 B.C.

The development of settled agriculture is likely the most important skill ever developed in mankind's history. The development of a system to ensure a constant and predictable source of food allowed humans to stop moving from place to place in constant search of game or wild fruit to forage. As a result, humans could now live in larger enclaves, and it is no coincidence that the earliest ruins of villages and proto-cities that have been found date to 8-10,000 B.C., the exact time period when humans began practicing settled agriculture.

Less time spent foraging and larger enclaves of humans spurred the development of many of the characteristics of human society we have today. For example, humans now had the time to create pottery and baskets, storage vessels that were now necessary as settled agriculture produced more food than humans could consume on a daily basis. Similarly, humans now had more time to think abstractly and to develop religious ideas about who they were and from where they had come. In addition, with larger settled groups of humans, laws, codes and rudimentary government were needed to determine conduct between human beings.

Most anthropologists agree that settled agriculture began in the Fertile Crescent in Mesopotamia around 8-10,000 B.C. Its spread across the ancient world allowed humans to stop their daily search for food and exert their energies into creating society. Today's mega-cities and increasingly urban lifestyle can still depend on large-scale, settled agriculture to feed the world's exploding population, a testament to how truly revolutionary the ancient development of agriculture was.

The Spread of Pastoralism and Agriculture in Africa

The Three Levels of Atmospheric Circulation

Types of Air Masses & Their Effect on Weather

What is a Tribe? | Tribe Concept, Characteristics & Examples

Typewriters History & Types | When Was the Typewriter Invented?