Patricia has an MFA in Writing, an MS in Teaching and English Language Arts, and a BA in English.

Horatio is a secondary character in Shakespeare's play, 'Hamlet.' Explore Horatio's character analysis and learn about his relationship with the tempestuous prince. Updated: 09/09/2021
Create an account

Horatio is Hamlet's trusted friend and confidant. When we first see Horatio in Shakespeare's Hamlet, he is called upon by the castle guards to address the ghost that they have encountered. Horatio is a discerning and intelligent man, and the appearance of this ghost makes him deeply uneasy. But Horatio is not afraid of the ghost, only of what it portends - that something is not well with Denmark. He is calm, resolute, and rational as he demands that the ghost tell him whether it has come to confess some ill deed or to predict the future fate of Denmark.

Horatio is not afraid to speak his mind to Hamlet, either. When Hamlet meets the ghost for the first time, Horatio makes it clear that Hamlet's choice to follow the ghost in hopes of learning the reason for its appearance is ill-advised. He is honest and forthright in his arguments and seems genuinely worried that Hamlet might be tempted to lose his reason and be drawn into madness, which, Horatio tells him, will lead to thoughts of suicide.

When Hamlet follows the ghost anyway, learns that King Hamlet was poisoned, and is sworn to avenge his death, Horatio allows himself to be sworn to silence and keep Hamlet's secret. Horatio is not only an honest, but a loyal friend, and the secret of Hamlet's father's ghost is the first of many secrets that Horatio will keep for Hamlet.

As the play progresses, Horatio questions Hamlet's judgment twice more. Once is when Hamlet tells him of a letter from King Claudius that he has found in Rosencrantz and Guildenstern's pack, telling the King of England that he must have Hamlet killed. The second instance is when Hamlet tells Horatio that he will fight Laertes, son of Polonius, who Hamlet killed earlier in the play. Horatio loves Hamlet with all his heart, but he is governed by a more sensible disposition, which compels him to speak the truth to his friend, despite the fact that Hamlet never once heeds Horatio's warnings.

In fact, there is only a single point in the play at which Horatio loses his sensible outlook, and it is but a momentary loss. At the end of the play, when Hamlet is killed in his fight with Laertes, Horatio, in his grief, offers to kill himself with his own sword. It is Hamlet's dying request that Horatio tell Hamlet's story, and let the truth of it be known, that keeps him from doing so. Horatio's sense of loyalty to, and love for, his friend, has won out and brought him back to himself and his own, more grounded, sensibility. 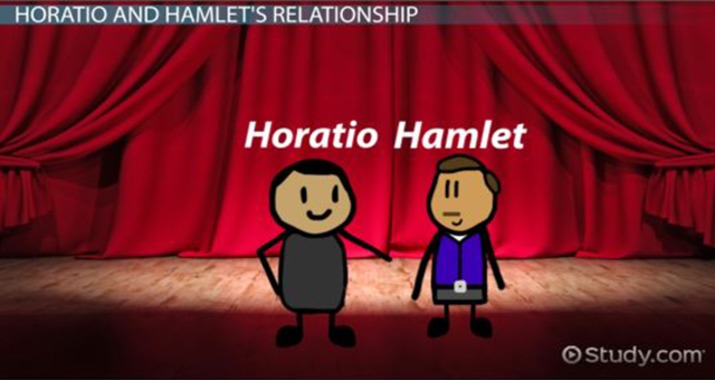 Try it now
Back
Coming up next: Shakespeare's Robin Goodfellow: Traits & Analysis

The warmth and closeness of Hamlet and Horatio's friendship is immediately established upon their first meeting in the play. We learn that they are good friends when Hamlet greets Horatio with delight, even going so far as to declare that he will 'teach (Horatio) for to drink ere (he) depart (Elsinore).' We also learn that they know each other as fellow students from Wittenberg, and as such, they share a world of intellectual possibilities that binds them together. But, other than their mutual love and respect for each other, they are as different as two people can be.

Horatio is not 'passion's slave.' Hamlet, however, is slave to his own tumultuous emotions and is unable to distinguish his mind's sound judgment from the cloud of passion. Horatio is a man of sensible disposition, grounded in a sound, practical common sense, in contrast with Hamlet's dark imagination and unruly mental activity.

Hamlet longs for the peace of mind that such a steadfast and sensible character must bring to Horatio, and in praising Horatio, acknowledges his own weakness in this area. Hamlet admires Horatio for the traits that he himself does not have and, as true friends do, he takes genuine delight in the sanity, the strength, and the constancy of Horatio's character.

This delight in, and admiration of, the qualities his friend possesses is the fundamental reason why Hamlet confides in Horatio throughout the play. He knows Horatio will keep his secrets, especially that of Hamlet's own 'antic disposition.' In fact, Hamlet passionately demonstrates this implicit trust, as well as his own love for Horatio, in his dying request that Horatio tell the truth of his story at the end of the play. Hamlet knows his friend will find the words that will reveal the truth of what has happened, and why. And Horatio, in his loyalty to Hamlet, agrees to forego his own death to complete the one final request his friend has made of him.

In many ways, Horatio is the exact opposite of his best friend Hamlet. Where Hamlet is passionate and headstrong, Horatio is calm and sensible. Nonetheless, these two characters are very close and Horatio remains a loyal friend to Hamlet throughout the play. When Hamlet dies, Horatio even contemplates killing himself but is stayed by Hamlet's request that Horatio stay alive to tell his story.

After you've viewed the lesson on Shakespeare's Horatio, determine your preparedness to:

The Theme of Friendship in Hamlet

Laertes Character Traits & Analysis | Who is Laertes in Hamlet?