Copyright
Lesson Transcript
Instructor: Ryan Bing
William Shakespeare's 'The Tempest' is a play written in the early 1600s with themes examining the theater's relationship to real life and postcolonial views. Explore a summary of 'The Tempest', study the characters, and read an analysis of the play. Updated: 09/14/2021
Create an account

Summary of The Tempest

The Tempest is a play that was written by William Shakespeare in the early 1600s. When the play begins, Prospero, the deposed Duke of Milan, and his teenage daughter, Miranda, live on a remote island where they have been stranded for the past twelve years. Their only companions are Ariel, a magical spirit enslaved by Prospero, and Caliban, a native of the island who is also enslaved by Prospero. Prospero was originally Duke of Milan, but his position was usurped by his brother Antonio, possibly with the consent of King Alonso of Naples and Alonso's brother Sebastian.

The play opens with Antonio, Alonso, and several of their retainers on a ship in a great storm, the titular tempest. Unbeknownst to them, the storm is the work of Prospero, who aims to shipwreck them on his island. Once they are washed ashore, Prospero plans to take revenge on his foes and regain his position as Duke of Milan. Eventually, through magic, intimidation, and trickery, Prospero succeeds in his plans. Prospero is restored to his dukedom, brings about the revelation of Antonio's betrayal, and secures the marriage of Miranda to King Alonso's son, Prince Ferdinand. 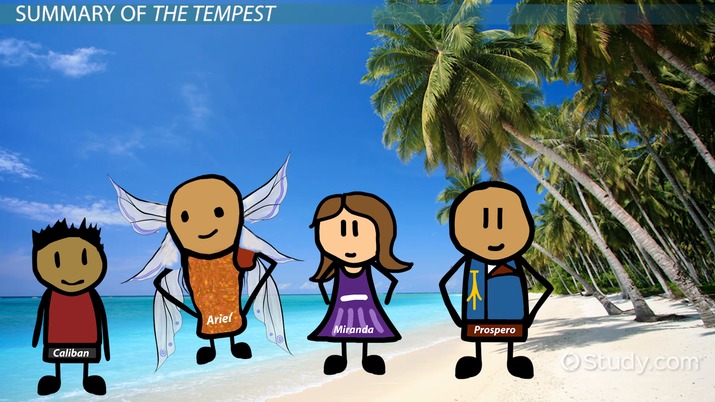 Coming up next: Thane of Cawdor: Meaning in Macbeth & Overview

Let's take a look at the characters in this play:

Now that we've covered the plot and characters of the play, let's take a moment to analyze the play.

Next, postcolonial views of The Tempest. Shakespeare lived at a time when Europeans were exploring the Americas, Africa, and Asia and establishing colonies in some of these places. The Tempest can be read as containing Shakespeare's commentary on colonialism. Prospero's enslavement of Ariel and Caliban by means of magic drawn from books can be seen as a metaphor for Europeans' domination of the people in their colonies through advanced technology. It is clear that Caliban and Ariel suffer as a result of this domination, and this can be read as Shakespeare's critique on the evils of colonialism.

The Tempest is a play that was written by William Shakespeare in the early 1600s. The play opens with Antonio, Alonso, and several of their retainers on a ship in a great storm, the titular tempest. Unbeknownst to them, the storm is the work of Prospero, former Duke of Milan, treacherously overthrown by his brother, Antonio, who has been stranded on an island for twelve years and is now a great sorcerer. He is stranded with his daughter, Miranda, and enslaves a magical spirit named Ariel and Caliban, a native of the island. Themes of this play include theater's relationship to real life and criticism of colonialism.

The Tempest: Colonialism and Magic in Shakespeare

Ariel in The Tempest by Shakespeare | Analysis, Character Traits & Description