Shell shock was a major issue that deeply affected soldiers in World War I, but the condition didn't stop with that war. In this lesson, identify the key traits of this trauma, its effect on soldiers and the evolution of its recognition and treatment through the years. Updated: 02/08/2022
Create an account

World War I saw the advent of a brutal mode of warfare. New and improved weapons killed millions who fought in tightly compacted trenches dug in the midst of ''no man's land'', the area between sides. Machine guns, flamethrowers, poison gas, tanks, and advanced artillery were used for the first time.

Add to this the conditions of the trenches soldiers fought in. They were dark, wet, filled with rats and disease, and poorly supplied. Soldiers spent their time from dusk to dawn down inside the trenches, unless the call came up to go ''over the top'' and charge the enemy. As soldiers were likely to be killed when the time came to charge, in effect they spent their time in the trenches waiting to die. Meanwhile, artillery went off constantly, sometimes right near a soldier. We might think of this as ''getting your bell rung'' one too many times.

The deplorable conditions of trench life, destructive weaponry constantly going off, and waiting to charge the enemy caused soldiers to reach their breaking point, something the soldiers themselves began to call ''shell shock''. Its symptoms included fatigue, confusion, tremors or ticks, nightmares, anxiety, and visual and auditory processing issues. Many soldiers lost the ability to even sleep, which resulted in lack of concentration and memory loss.

As you watch this, you might be getting a picture of how truly distraught a soldier with these symptoms would appear. Is it something like this picture?

Though seen by some as a weakness, the effects of warfare on soldiers were, at that time, poorly understood. Advances in psychiatry, along with public awareness, have enabled militaries since then to better identify and treat it. Today, the condition is known as post-traumatic stress disorder (better known as PTSD), which is an umbrella term for a psychological disorder that results from a traumatizing event. 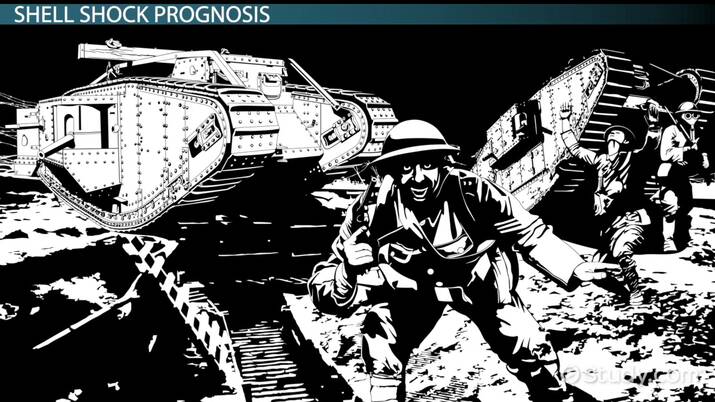 Coming up next: The Role of U.S. Women in World War 1

Early on in the war, soldiers who exhibited the symptoms of shell shock were simply viewed as cowards or lacking the manliness to fight by their leaders. Giving in was inexcusable and disrespectful. Soldiers were sometimes executed for displaying any symptoms.

Changes in psychiatry as the war progressed prompted many doctors to declare shell shock a legitimate issue for soldiers, but military leaders often refused to accept their medical officers' findings because they didn't want to believe their men were breaking mentally. Doctors did attempt treatment, though, and any ideas were tried.

Some doctors believed just a break from the front lines with an eventual return would be enough. Others felt that soldiers needed to be removed immediately and treated with faradization, using electrical currents to eliminate ticks, tremors, and fatigue.

Some doctors just sat down with patients and let them talk about what they had seen to get it out of their systems. Treatment varied depending on which country the soldier was from. For example, the British were very caring and truly tried to help their soldiers, while the German and French sides tried more intense approaches, such as the faradization.

Even though the ultimate goal of military doctors was to return a soldier to the front lines, many battle-hardened men wouldn't return. Whether because emotional breakdown was seen as a sign of weakness, or no treatments were proving effective, those affected were eventually dismissed from duty.

Despite not having to face the terror of war again, shell shock didn't just go away upon discharge. The effects lingered long after the silencing of bombs and machine guns. Some were able to recover, but many felt effects for the remainder of their lives.

Though not a priority to military leaders at the time, the evolution of war, psychology, and the deepening understanding of psychiatric disorders have placed PTSD and similar conditions on the front burner since World War I. Treatment of soldiers in World War II, the Vietnam War, and other more recent conflicts improved substantially.

Today, many resources and services are dedicated to the identification, treatment, and long-term monitoring of soldiers who are afflicted by PTSD, and groups and organizations such as the U.S. Department of Veteran Affairs (as in, the VA) are working to help those returning home from the recent conflicts in Iraq and Afghanistan.

Let's now take a moment or two to review what we've learned about this. Whether caused by the terrible living conditions, explosions, the sights, sounds, and smells of battle, or length of service, soldiers can quickly become traumatized. During World War I, many soldiers developed ''shell shock'', which was a condition that arose from the constant exposure to the deadly weapons, conditions, and constant barrages of trench warfare, resulting in symptoms like fatigue, confusion, tremors or ticks, nightmares, anxiety, and visual and auditory processing issues.

Originally seen as a sign of weakness, advances in psychiatry made it known to be a real issue that required treatment, beginning with cruder attempts, like faradization, which involved using electrical currents to eliminate ticks, tremors, and fatigue. Since then, identification and treatment have become more of a priority for militaries across the globe. Today, treatment for what was once called ''shell shock'' is now referred to as treatment for post-traumatic stress disorder (PTSD), which is an umbrella term for a psychological disorder that results from a traumatizing event.