The production possibilities frontier (PPF) is an economic model used to illustrate how people and nations should decide what goods to produce, how much to produce, and for whom they should produce it. It's a model and a concept that looks at only two goods at a time. For example, what combination of cars and computers should a nation produce? 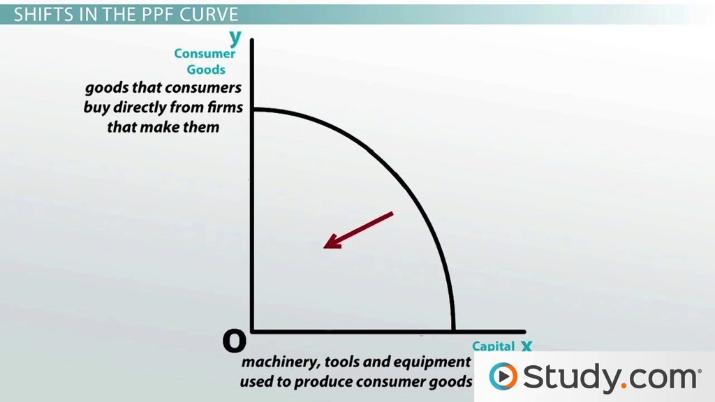 Economists also use the PPF model to illustrate two categories of goods, both consumer goods and capital goods. So here is what that PPF curve looks like.

In any economy, investments into capital goods will do more to increase economic growth than investments into consumer goods will. For both of these types of curves, every point along the curve is efficient, meaning this combination of producing two goods is at our capacity. We're producing the most that we can with the least amount of costs. Movement along this curve reveals the trade-offs that are required to produce more or less of a good. We said that any point inside the curve is not efficient, and any point outside the curve is unobtainable.

The best example in history of when America's economy was inside the curve was during the Great Depression. At that time, unemployment was extremely high, and production was extremely low. But eventually, during World War II, our economy moved from inside the curve to somewhere on the curve. Now we're producing things as fast as we can, largely driven by the war, but we are on the curve. Even though we were producing a lot more, we still had a limit, a capacity that we couldn't exceed, unless something major changed. That's why any point that is outside the curve is not possible.

The production possibilities curve, whether it is showing two specific goods, such as cars and computers, or two types of goods, such as capital goods and consumer goods, shows us how much is produced, which means it's showing us a picture of output.

Shifts in the PPF Curve

So, now we can talk about shifts in the entire curve. The basic idea is that anything that causes economic output to increase or decrease will shift this curve. In any economy, the major goal that you're trying to achieve is growth, which is to say, producing increasing amounts of the goods and services that consumers demand.

Shifts in the production possibilities curve are caused by changes in these things:

• More education or training (that's what we call human capital)

• Changes in the labor force

Let's briefly explore each one of these and see how they shift the curve. Probably what you hear about most in economics is how changes in technology affect the curve.

For example, let's say the country discovers a new technology, such as a new computer system that improves productivity. Anything that improves the productivity of workers is good. This causes output to increase, so the production possibilities curve shifts outward, or to the right. On the other hand, let's say a major war causes destruction of capital equipment in the country. This would cause output to decrease, so in this case, the production possibilities curve shifts inward, or to the left.

Changes in resources are also going to shift the curve - for example, if a country discovers a new energy source, like new solar panels, let's say. This causes output to increase, which shifts the production possibilities curve outwards, or to the right. On the other hand, if the country gets devastated by a major hurricane, it's not too difficult to imagine that this setback would make it more difficult to produce things. This causes output to decrease, which in turn shifts the production possibilities curve inward, or to the left.

Shifts in Education and Training

Finally, if there was a sudden increase in the labor force, either from a population boom or, more likely, from immigration, then the production possibilities curve shifts outward, or to the right. Why is this? It's because more people working means more production possible.

This works in reverse as well. If the country experiences more unemployment, then the unemployment rate goes up. That means the labor force is shrinking, so more people are not working and not being productive. This would decrease the output of the nation, and shift the production possibilities curve inward, or to the left.

To summarize, the production possibilities frontier (PPF) is a model that helps us decide what to produce, how to produce it, and for whom to produce it.

Consumer goods are final goods that are purchased directly by consumers, while capital goods represent machinery, tools, and equipment, or anything that is used to produce consumer goods.

Shifts in the production possibilities curve are caused by things that change the output of an economy, including advances in technology, changes in resources, more education or training (that's what we call human capital) and changes in the labor force. Increases in the production possibilities curve are represented by shifts outward, or to the right, while decreases are represented by shifts inward, or to the left.

Understanding the Demand Curve in Microeconomics

The Supply Curve in Microeconomics

Price Elasticity of Demand in Microeconomics

Minimum Wage and its Effects on Employment

Economic Growth: How to Raise a Nation's Potential Output