Wireless technology allows for the transfer of information via radio waves instead of cables. Learn about short-range wireless communication and understand its use for technology such as Bluetooth, ZigBee, infrared transmission, and others. Updated: 08/23/2021
Create an account

A number of different wireless technologies have been developed for very short distances. These are referred to as 'short-range wireless communication.' Signals travel from a few centimeters to several meters. 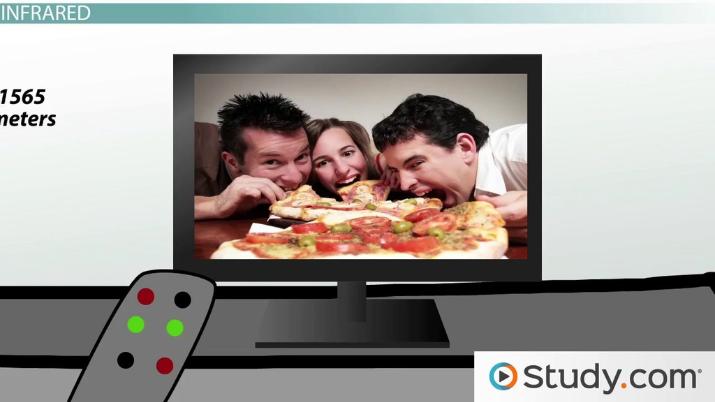 Try it now
Back
Coming up next: Medium-Range Wireless Communication: Wi-Fi & Hotspots

Bluetooth is a type of wireless communication used to transmit voice and data at high speeds using radio waves. It is a standard protocol for short-range radio communications between many different types of devices, including mobile phones, computers, entertainment systems and other electronics. Devices need to be within approximately 10 meters of each other, and the typical data transfer rate is around 2 megabits per second (Mbps).

The technology is named after the Danish King Harold Bluetooth who unified Scandinavia. Bluetooth signals operate in the 2.45 GHz frequency band. Every device using Bluetooth has a small microchip that can send both voice and data signals. In a typical setup, one device operates as the master, and one or more other devices operate as slaves. The master device uses link manager software to identify other Bluetooth devices to create links with them to be able to send and receive data.

Bluetooth uses a spread-spectrum frequency-hopping technology. This means it uses multiple frequencies at the same time to limit interference when using multiple devices. While Bluetooth does not need a direct line of sight, the signals do not carry very far, and the devices need to be within approximately 10 meters. This works great to make phone calls using the audio system in your car or to play music through a wireless speaker, but it does not work well to connect multiple computers in an office building.

Bluetooth is widely used in mobile phones. For example, a wireless mobile phone headset allows you to make phone calls without placing your phone to your ear. A similar example is to use your Bluetooth to set up a link between your mobile phone and you car's audio system, making it possible to make hands-free phone calls. Bluetooth is also widely used to establish a wireless connection between a computer and various peripheral devices, including a mouse, keyboard, printer, digital camera, etc.

Many modern electronic devices have Bluetooth built in, such as remote controls for video games. It is also used for regular desktop and laptop computers but is not nearly as common as a WiFi card. However, if your computer does not have Bluetooth, you can use a Bluetooth USB dongle instead.

While Bluetooth and WiFi have some similar applications, there are some key differences. WiFi is typically used as a replacement for high speed cabling in local area networks and makes it possible for a mobile device to establish an Internet connection. Bluetooth is more commonly used as a replacement for cables between different electronic devices to communicate with each other, establishing a personal area network. Bluetooth is not widely used for an Internet connection.

WiFi also allows for higher speeds and connections over greater distances. On the other hand, Bluetooth is often much simpler to operate and may only require a single button press, such as in remote controls and headsets.

Infrared (IR) light is electromagnetic radiation with wavelengths that are just beyond those of visible light. The human eye can see light in the wavelengths from approximately 390-700 nanometers. Infrared light has wavelengths from 700 nanometers to 1 millimeter. This corresponds to a frequency range of approximately 430 THz to 300 GHz. Infrared is widely used in applications such as night vision devices and thermal imaging. Infrared essentially allows you to see heat, even when there is no visible light source.

Infrared has been widely used for short-range wireless communications, in particular in the wavelength range from 1530-1565 micrometers, known as the C-band. Most remote controls for electronic devices, such as your TV or DVD player, use infrared. The remote control uses an infrared light-emitting diode (LED) to emit infrared radiation that is focused into a narrow beam by a plastic lens. The information being transmitted, such as the number of the channel you want to watch, is encoded into the signal. The receiver converts the infrared radiation to an electric current and decodes the information.

Infrared signals do not penetrate walls and require an approximate line of sight. The range of the signal is limited and typically does not carry further than around 10 meters. Infrared lasers are also used as the light source for fiber optic cables, and while this is not considered an infrared wireless connection, it shows the versatility of infrared.

Zigbee is a wireless communication technology for short-range, low-power digital radio communications. Relative to WiFi and Bluetooth, Zigbee uses very little power and a low data transfer rate. While these may not sound like major advantages, it results in much lower costs and longer battery life. This makes it possible to install Zigbee modules on many devices. While the range of a single module is fairly limited, a series of devices in close proximity can be used for communications over longer distances. This results in a wireless mesh network, which can cover large areas.

Zigbee is widely used for applications that require low data transfer rates and low power consumption. Consider the example of a transportation management system. In order to manage traffic congestion, a city has installed numerous traffic sensors - for example, small electronic traffic counters to determine how many vehicles pass a particular location and at what speed. This information needs to be collected and processed so it can be used in real-time traffic management.

You may have seen signs on the highway warning you of congestion up ahead - these signs provide real-time information on the conditions elsewhere on the roads. Connecting all these traffic sensors using cables would be very cumbersome and expensive. A cellular or WiFi connection would also be very expensive for a large number of sensors.

Zigbee makes it possible to connect hundreds or thousands of sensors at a relatively low cost. Zigbee modules can be used to collect all the information from the sensors, which is then sent to a central location for processing. The results are then sent back to the signs on the highway to alert drivers.

Zigbee is also used in remote controls, home entertainment systems, energy management, building automation and many other fields. Zigbee is not as widely known as technologies like WiFi or Bluetooth because it is often embedded into systems and not very visible. It often works behind the scenes without requiring user input to turn it on. You may have used a device with Zigbee without even knowing it.

Ultra-wideband, or UWB, is a short-range communication technology that uses extremely short magnetic pulses. These pulses can carry about 10-50 meters and can support very high data transfer rates of several hundred megabits per second. Ultra wideband also does not require a direct line of sight and can travel through walls. Despite its potential, the development of standards for ultra-wideband has been slow, and as a result, it is not widely adopted.

Near field communication, or NFC, is a very short-range communication technology for things like consumer electronics, mobile phones and credit cards. Devices have to be in very close proximity, typically a few centimeters. For example, if you have used your credit card to make a payment simply by holding it close to a payment terminal without actually inserting your card, you have used NFC. A number of different types of mobile phones also include the technology, making it possible to use your phone for electronic payments and other types of transactions without direct contact.

A number of different technologies have been developed for short-range wireless communication where signals travel from a few centimeters to several meters. Bluetooth is a standard protocol for short-range radio communications between many different types of devices, including mobile phones, computers, entertainment systems and other electronics.

When you've completed this video, you could be able to:

Lifecycle of an Applet

Responsibilities of a File Manager in Operating Systems

Lifecycle of an Applet

Responsibilities of a File Manager in Operating Systems