View bio
Signal-to-noise ratio (SNR) is the measure of the power of desired signal relative to the background noise level. Learn the definition and formula of SNR, and explore related concepts such as surface temperature change signal and time of emergence. Updated: 01/05/2022
Create an account

The terms signal and noise are used in many different contexts, but in this lesson we'll explore what they mean in a physical engineering or statistical sense. The terms actually come from radio engineering, in which a signal is the noise-free signal, and noise is the white noise you hear when you can't tune a radio to a particular station. Signal processing is the statistical technique used to extract information from the raw signal. 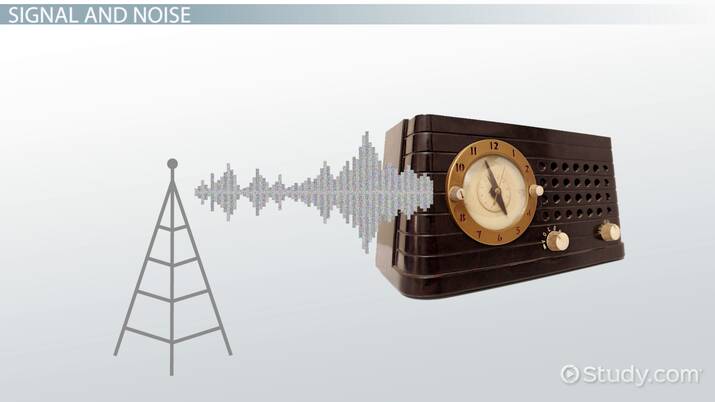 The knowledge of this ratio has many important applications in applied mathematics, analytical chemistry, electronics, and the geosciences. In electronics, signal and noise are measured in decibels, which is a measure of volume. In other disciplines, the SNR is also known as the effect size.

Imagine you're having a conversation with a friend on a quiet street. Now imagine you two are talking in a crowded pub or restaurant. The noise (in the background) and the signal (your voices) will both be a lot louder, but the SNR may be about the same—just strong enough for you to understand each other. If you were to make a video of your conversation, you could easily tell how loud the video is, but you'd have to do some processing to determine the power of each element.

Now imagine you and your friend are talking about the acorns you see on the sidewalk. You notice that you tend to see bigger acorns under bigger oaks. This could be your imagination, though. To figure out whether bigger oaks really make bigger acorns, you'd have to measure the natural size variability among acorns (the noise) and the correlation with oak size (the signal) to find out how much of the variability is due to oak size as opposed to some other reason (the signal-to-noise ratio or effect size). If you really wanted to, you could measure it in other towns to see if the SNR was any different there.

Since you're talking about oaks, the conversation may naturally turn to climate change, Then you and your friend can really dig deep into signal-to-noise ratios. Climate scientists use a similar (although more sophisticated) approach to determine the signal of surface temperature change against the very noisy backdrop of natural climate variability.

Since 1880, the global surface temperature has increased by 0.8° Celsius (1.4° Fahrenheit). This does not sound like much, but such a change is large considering the consequences that a rise in temperature could have on the melting of the icecaps in the poles as well as on extreme weather in the tropics.

This is the long-term global surface temperature change, but we look at temperature on a year-to-year or by decade-to-decade basis, we see large amplitudes of variability in temperature through time. A lot of this variability is seasonal. Some of it comes from less predictable sources, including volcanic ash or air pollution, both of which can block sunlight and cause local surface temperatures to drop. Ocean currents and weather patterns also influence surface temperature. Against this noise, climate scientists need to find the signal—the rising temperature that we know is the result of growing levels of greenhouse gases in the atmosphere. These types of changes are both superimposed on the long-term climate signal, and it is a challenge to determine whether the signal of human-made climate change has emerged from the noise of natural variability.

We also see large differences in surface temperature change in different locations. The signal and the noise can both vary from place to place. That means the SNR can vary, too. To see this variability, take a look at the map below, which was made using the changes in local temperatures between 1900 and 2013.

You can see from the third panel that the tropics have the largest signal relative to the noise of climate variability.

So what's most important: the signal, the noise, or the SNR? The answer is that they're all important, but the SNR can yield unique insights about the severity of temperature change in a given region. When the climate is relatively stable to begin with, small fluctuations can make an even bigger difference than in climates that were more variable to begin with. In other words, this map shows which regions of the world are experiencing the greatest impacts of climate change.

The time of emergence is the point at which the SNR reaches a particular value, usually 1. When SNR is greater than 1, the power of the signal exceeds the power of the noise. This means that the climactic variability due to climate change is equal to or greater than the background variability, and it's one way to estimate when climate change will start to have effects on an area. Since SNR varies regionally, the time of emergence also varies. Scientists studying data in 2017 can look back and figure out that the time of emergence for a given city was 1987, or they can determine that it hasn't been reached yet.

It can also be useful to map other values of SNR to gain a better understanding of how fast the signal is increasing. The map here includes the time of emergence when SNR = 1 and when SNR = 2. You can see which regions are being affected first.

All right, let's take a moment or two to review what we've learned. The terms signal and noise originated in radio engineering. We learned that extracting useful information from a raw signal requires using a technique called signal processing. The signal-to-noise-ratio has many important applications in electronics, applied mathematics, analytical chemistry, and geosciences and can be defined as the ratio as the power (P) of a signal to the power (P) of the background noise.

We also learned that climate scientists use this ratio to determine where the largest change is taking place.

They process temperature data to determine:

We also learned that the year in which the signal becomes recognizable is called the time of emergence. Together, these values can help us understand the speed and severity of climate change.

This activity will help you assess your knowledge regarding the properties and applications of the signal-to-noise ratio.

For this activity, carefully read and select the best answer that completes each of the given statements. To do this, print or copy this page on blank paper and circle the letter of your answer.

3) The signal of surface temperature change against the __________ can be determined in a similar approach as signal-to-noise ratios.

D. None of the above

4) Which of the following is TRUE about the data for global surface temperature?

A. The global surface temperature has increased periodically by 0.1 degrees Celsius since the 1880s.

B. The data is not linked to the rise in temperature leading to the melting of the icecaps in the poles.

C. The tropics have the smallest signal relative to the noise of climate variability.

D. There is a large amplitude of variability in temperature over the years.

5) __________ is a parameter used to map other values of SNR, providing a better understanding of how fast the signal is increasing in a particular region.

What is Optical Fiber? - Definition & Concept