View bio
Explore the similarities and differences between Islam and Christianity to unearth their shared origins and where they diverged. Discover how they are both monotheistic, Abrahamic religions, their views on God, and their different worship practices. Updated: 01/04/2022
Create an account 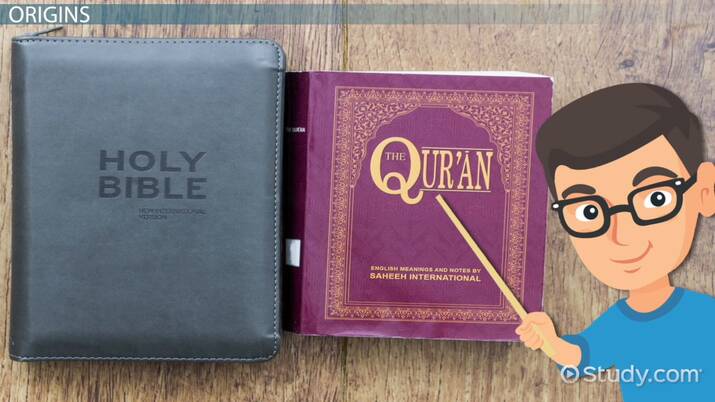 Coming up next: Catholic Emancipation Lesson for Kids

One major similarity found in Christianity and Islam is that both have a holy book that they use to better understand their idea of God and practice their religion. Christians use the Bible, while Muslims use the Quran (pronounced kor-an), which means ''the recitation,'' because the Quran has been memorized and passed down through history. Both the Bible and the Quran include the history of both religions dating all the way back to how they believe the world began. They also include stories about what will come to pass at the end of the world.

One major difference between Christianity and Islam is in the nature of God. Christianity teaches that God sent his son, Jesus Christ, to redeem all of mankind, and that only belief in Christ will allow someone to enter heaven. Muslims refer to God as Allah and believe that Allah created all of existence as we know it. Islam teaches that Allah is the only god, and that only worship of him will let someone go to heaven, which they call jannah, meaning ''garden.'' Christians often create pictures of God and Christ in art, while Islam teaches that God can never be represented in an image like a painting.

One of the most important aspects of Islam is the ''Five Pillars,'' which are five duties that all Muslims must follow:

By contrast, all Christians must believe in Jesus Christ, must pray to God, and must attend church in order to enter heaven. Some Christians, especially Roman Catholics, believe that they must confess their sins before a priest in order to have them removed.

Christianity and Islam are the two largest monotheistic religions in the world. They are similar in that both are Abrahamic religions that believe that the prophet Abraham was one of the original founders of the faith and rely on the teachings of a holy book, the Bible for Christians and the Quran for Muslims. However, Christianity and Islam differ in their beliefs about Jesus Christ, the nature of God, and means of worship, such as the hajj, or pilgrimage, required in Islam.

This lesson introduced you to the origins of and differences between Christianity and Islam, two of the world's largest religions. Use these activities to learn more.

Whether you were raised as a Christian, Muslim, another religion, or without religion, think about your own experiences. Consider your own upbringing and examine this lesson. How does this description of religion compare to your personal experiences? Did you learn anything about religions that you don't practice? If you are not Christian or Muslim, how do your religious practices (if you have any) differ from the ones described here? Write a personal reflection explaining your thoughts.

If you are a Christian, use Islam for this prompt, and vice versa. If you are neither a Christian nor a Muslim, choose one of the two. This lesson gave you a great introduction, but there is a lot more to learn about these religions. Do some of your own research and examine the history of each religion and the beliefs that go along with it. Write a detailed list or paragraph explaining what you have learned. How has this information helped you to get a more nuanced understanding of a religion that you do not practice?

Cult of Mithras God, History & Religion | Who is Mithras?

What is Monotheism? | Christianity & Other Religions

How to Improve One's Worldview