Imagine you're a famous artist. You've been contracted by your city to build two sets of similar figures in front of the city hall for a modern art installation. The city wants to have a pair of similar triangles and a pair of similar rectangles. In math, we say that two figures are similar when the shapes are the same with the only difference being the size. 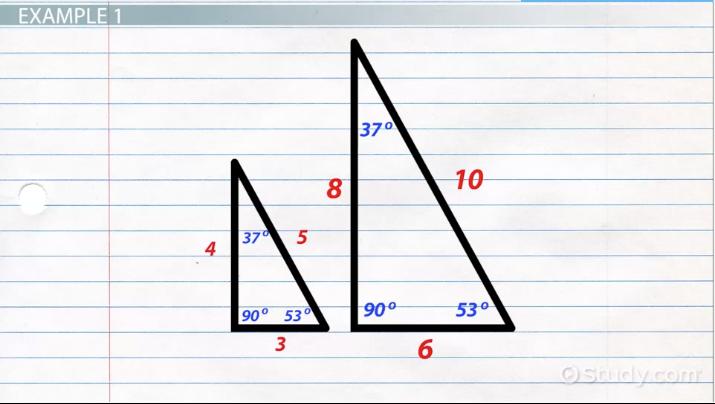 Coming up next: How to Prove Relationships in Figures using Congruence & Similarity

Luckily, we have transformations, or ways to rearrange a figure. There are several transformations to help us place our figures in the same way. You can use rotation to turn one figure until it's placed in the same way as the other figure. If one of your figures were upside down, then you can use a reflection, or flip it across a line, to get it right side up. If one figure is far away from the other, perform a translation, or slide the figure until it's closer. All three of these transformations won't change the size or shape of the figure, so you'll still have all of your corresponding angles and corresponding sides if the two figures are similar.

Now that you know how to use transformations to place your figures in the same way, let's see how you can figure out if your two triangles and two rectangles are similar.

The pair of triangles that you are looking at are these two.

Now, let's check the two rectangles. Are these similar?

It's easy to locate corresponding angles and corresponding sides when similar figures are placed in the same way. If two figures are arranged differently, you can use several transformations, or ways to rearrange a figure. You can perform a rotation or turn the figure, like we did with the rectangles. You can do a reflection, or flip the figure across a line. A translation simply lets you slide a figure without changing its orientation. These three transformations won't change the size or shape of the figure. You'll still have all the corresponding parts and should be able to match them together with less difficulty.

Reflections in Geometry | What is a Reflection in Math?