Our pituitary gland is the 'master gland,' the driving part of our endocrine system. In this lesson, we'll look at what happens when the anterior pituitary gland doesn't work properly and distinguish between two resulting conditions called Simmonds' disease and Sheehan's syndrome.
Create an account

Drowsy driving can be disastrous. Our pituitary gland serves as the 'driver' of our endocrine system by secreting hormones essential to maintaining homeostasis. Simmonds' disease and Sheehan's syndrome are conditions that occur when the pituitary is 'asleep at the wheel,' failing to make hormones vital to keeping our body's systems in balance.

The pituitary gland is divided into two portions: the anterior and the posterior. Each part makes different hormones. Because of the number of hormones and the wide ranges of their effects, this lesson will focus on the anterior portion. Let's recap the major hormones this part makes and what they do.

Note that these hormones have something in common. They all stimulate a reaction in other cells, glands, or organs.

Panhypopituitarism results when the production of the anterior hormones is either insufficient or absent. Pan refers to all and is used when the majority of these hormones are absent.

In adults, this condition is usually caused by damage due to surgery or radiation. Other causes include stroke, infection or inflammation, tumors (called pituitary adenomas), attack by the body's own immune system, or injury. Children sometimes develop panhypopituitarism either congenitally or due to asphyxia during childbirth. 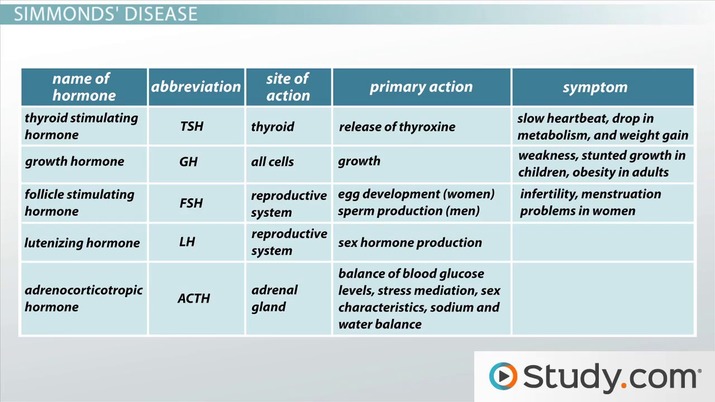 Coming up next: Consequences of Pituitary Adenoma

Panhypopituitarism is commonly called Simmonds' disease after the physician who first described it. It's also called pituitary cachexia. Cachexia means wasting. This is because Simmonds' disease results in atrophy (shrinking and reduced function) of the cells and organs that are normally stimulated by pituitary hormones. This makes sense - if the body's not using it, it's going to lose it.

The physical symptoms of Simmonds' disease depend on the cause. For example, if the disease is caused by a tumor and presses on the optic nerve and surrounding brain structures, then headaches and blurred vision are common.

Most of the symptoms of Simmonds', however, stem from the lack of pituitary hormones, and the atrophy that follows. If you know the organs and glands that the pituitary stimulates, you can probably guess the symptoms. Let's go back to the table we used earlier and add another column to it.

Treatments for Simmonds' disease typically do two things. First, they focus on the underlying cause. For example, pituitary adenomas can be successfully removed surgically. Most treatments, however, involve hormone replacement therapy, sometimes for life.

Sheehan's syndrome is Simmonds' disease caused specifically by blood loss during and after childbirth. This cause is evident in its other name: postpartum hypopituitarism.

During labor and immediately after childbirth, the pituitary gland is particularly at risk for damage due to low blood pressure. Why? During pregnancy, the pituitary grows in size in preparation to release prolactin, a hormone involved in milk production. Although the amount of pituitary tissue increases, pituitary blood flow does not. Couple this change with an already low pressure system of veins that feeds the anterior pituitary gland, and add significant blood loss during labor, and you create the potential for ischemic necrosis, which is death of tissue due to lack of blood flow.

Most women who have Sheehan's syndrome have symptoms similar to those of Simmonds' disease due to complete loss of all of the anterior pituitary hormones. Those who don't almost always suffer the effect of the loss of growth hormone, FSH, and LH. Symptoms may occur gradually or not show at all until years after delivery. Treatment of Sheehan's is by hormone replacement therapy similar to Simmonds' disease.

Both Simmonds' disease and Sheehan's syndrome result from problems with the pituitary gland, the control center for the body's endocrine system.

Both conditions can be a form of panhypopituitarism, which results when the production of the anterior hormones is either insufficient or absent.

Simmonds' disease, when caused by a tumor called a pituitary adenoma, can result in physical symptoms like blurred vision or headache. Simmonds' can also be caused by damage due to surgery or radiation, stroke, or infection.

Sheehan's syndrome is caused solely by blood loss during and after childbirth. Ischemia, or insufficient blood flow to the pituitary gland cells, causes cell death.

Both Simmonds' and Sheehan's share symptoms caused by lack of pituitary hormones and the atrophy (shrinking and reduced function) of the glands and organs that are normally stimulated by these hormones. These symptoms range from thyroid problems, like a slow metabolism, to adrenal gland problems, like poor response to stress and inability to balance water and sodium. Sheehan's is most likely to cause the symptoms of lack of growth hormone (obesity) and LH and FSH (problems with sexual function).

Treatment of both Simmonds' and Sheehan's is primarily hormone replacement therapy, usually for life.

What Is Dysplasia? - Definition, Symptoms & Treatment