Copyright
Lesson Transcript
Instructor: Sarah Phenix
Slime molds are a species of colonial protists. Explore how these protists form colonies, what they look like, the types of slime molds, and why they are not a type of mold despite their name. Updated: 12/15/2021
Create an account

To be, or not to be, a fungi? So maybe we don't have to get all Shakespearean about it, but the real question we must ask for this lesson is, Are slime molds a type of mold? The answer to that question is actually a loud and resounding NO.

For a long time, slime molds were thought to be a type of mold (hence their name), but more recently we found out that we were wrong. They don't actually belong to the kingdom Fungi but to the kingdom Protista. That's right, slime mold is a type of protist! 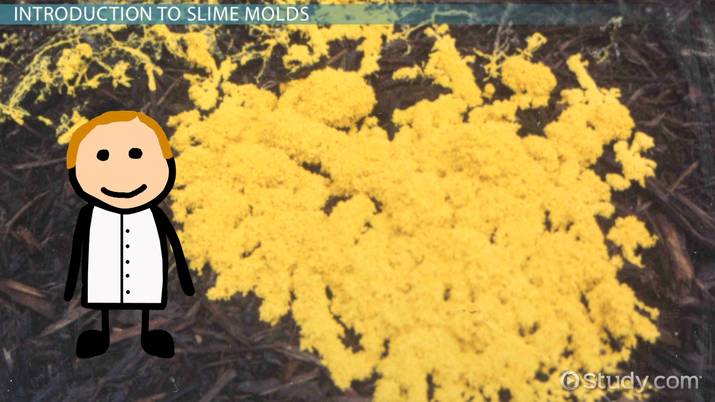 Coming up next: The Movement of Spirogyra Protists

You may be asking yourself what a protist is. It's a fair question, because even biologists have a tough time with this one. We've really only been able to narrow down the protist identity to eukaryotic organisms, meaning having membrane-bound organelles within their cell membranes, that can't be classified as belonging to either the animal, plant, fungus, or bacteria kingdoms. Sounds pretty vague, right?

So where does all this confusion come from? It stems from the polyphyletic nature of protists, meaning that, if you were to draw a family tree of their lineage, you would find that not all protists share the same common ancestor. In other words, some organisms that are considered protists may have stemmed from other kingdoms and, while they no longer share the characteristics that define their ancestral group, they have carried over some of their traits and/or behaviors.

Slime molds are a type of protist that aggregates into colonies and ingest bacteria, fungal spores, and possibly other protists. Once the slime mold cells group, they do one of two things: Either they fuse their individual cells into one massive multi-nucleated cell, or they fuse their membranes to one another to form a cluster of individual cells. This fusion results in slime mold colonies that can be anywhere from half an inch in diameter to 12 inches long.

What's more is that not all slime molds are alike. Some have flagellated cells with a tail-like flagellum, while others are amoeboid, having an amorphous shape, and because of these features, they can actually move! But you won't see them in high-speed chases any time soon, as their max speed is about 1 millimeter per hour.

Why Isn't Slime Mold a Mold?

To be a true fungus, an organism must share the following characteristics:

While slime mold cells are larger than bacteria and don't have chlorophyll, they lack chitin in their cell walls and they move. What's more is that fungi don't ingest organisms. They release an enzyme that breaks down their food items, which they then absorb through their skin.

So why were slime molds initially confused with molds? Well, slime molds go through a very fungus-like life stage during which they produce clusters of spores, often at the top of a stalked structure called a sporangium. Slime molds do this when their environment becomes hazardous or unfavorable. It ensures their genetic survival, as these spores can germinate after up to about 75 years of dormancy.

Plasmodial slime molds, such as Physarum polycephalum, are slime molds that form giant, multinucleated cell colonies. Their cell walls merge and their contents join into a singular mass of cytoplasm.

Cellular slime molds remain as unicellular 'slug-like' amoeboid protists for much of their life, crawling through leaf matter and decaying matter on the forest floor. However, they gather into a pseudoplasmodium, a group of plasmodium without actual protoplasmic fusion, to reproduce.

Slime molds are protists, which are eukaryotic microorganisms that can't be classified as belonging to either the animal, plant, fungus, or bacteria kingdoms. Slime molds are a type of protist that aggregate into colonies and ingest bacteria, fungal spores, and other protists. They were once confused as molds because they share some of the characteristics of fungus (cells are larger than bacteria, don't have chlorophyll, and do form clusters of spores at the top of stalked structures called sporangia), but slime molds lack chitin in their cell walls and they move. Confusion also stemmed from the polyphyletic nature of protists (they don't all share the same common ancestor) and, while they no longer share the characteristics that define their ancestral group, they did carry over some of their traits and/or behaviors.

The Origin & Early Evolution of Mammals

What Are Algae Blooms? - Definition & Examples