The social cognitive theory says that people can learn how to behave by watching and interacting with others. Take a closer look at the definition of the social cognitive perspective, explore Bandura's experiment and how it contributed to developing this theory, and understand how reciprocal determinism works. Updated: 09/03/2021
Create an account

Jane has always been pretty plain, and she gets lost in the crowd easily. No one ever paid much attention to her. But Jane's best friend Cathy has an eating disorder, and her parents, friends and even the teachers and principal at their school are giving Cathy lots of support. Jane realizes that by not eating, Cathy is getting all the attention and love that Jane herself doesn't get, so she too develops an eating disorder.

The behavioral model of abnormal psychology says that psychological issues are a result of learning negative behaviors. Just like Jane has learned that eating disorders will get her attention, behavioral theorists believe that people learn maladaptive behaviors, which lead to issues.

In some ways, this seems pretty intuitive. After all, if I steal something and am caught and harshly punished, I've learned not to do that. But what if I don't steal anything? What if I see someone else steal and get punished? Will I still learn my lesson?

Social cognitive theory says that people learn behaviors through their interactions and observations of others, as well as their direct experience. Remember that Jane learned from watching Cathy how much attention an eating disorder could get a person. This is social cognition. Jane is learning from her interactions with and observations of her friend. 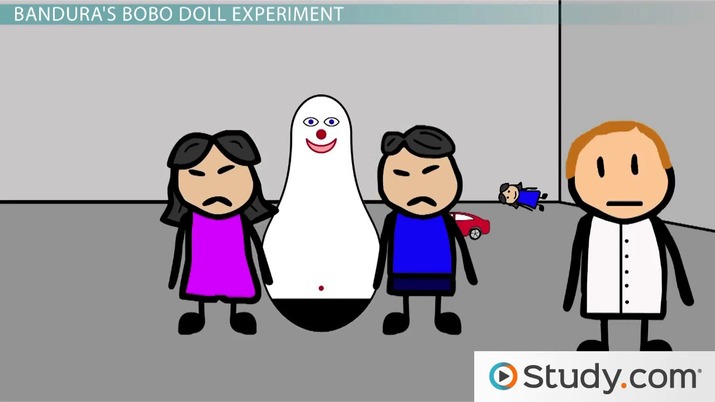 Coming up next: Common Behavioral Treatments: Classical Conditioning and Desensitization

Social cognitive theory has its roots in a famous experiment done by Albert Bandura in 1961. In Bandura's experiment, children were shown a video of an adult hitting, kicking and tossing a life-size clown doll, called a Bobo doll. The adults in the video showed very aggressive behavior, the kind of behavior that most people would not display.

Then, Bandura left the children alone with several toys, including the Bobo doll. Many of the children engaged in the aggressive acts that they saw the adults in the video do. They hit and kicked the doll. They shouted angry words at the doll. In short, they imitated the adults. Before the Bobo doll study, people assumed that watching an aggressive act would drain a person's level of aggression and make them less aggressive. After the study, however, people and psychologists began to pay more attention to how behavior is shaped by modeling.

Remember Jane? Just like the kids in the Bobo doll study, she learned her behavior (the eating disorder) from watching her friend Cathy. In this way, social cognition theory says that Jane has learned her way into a psychological disorder.

There's more to the story than simple learning, though. Bandura also noticed that while people are learning from others around them, they are also shaping the way people interact with them.

Let's look at an example. Jane's friend Christie hates school. She acts out aggressively, talking back to teachers and bullying other students. As a result, the teachers and principal are very stern with Christie.

She gets in trouble for things that other students, like Jane, can get away with. This makes Christie hate school even more and act out even more. It becomes a cycle where Christie's behavior causes a reaction in the behavior of the people around her, which causes even more of a reaction in Christie.

If you are a serious and conservative student most of the time, you are likely to choose a school environment that will conform to your personality and allow you to reach your goals. If you are the type of person who likes to party more than study, you will choose a school with a more relaxed atmosphere that is known for its parties. Once in those schools, the environments and your thought processes will continue to shape your behavior.

According to social cognitive theory, you cannot understand personality without also looking at the social forces involved. Albert Bandura's Bobo doll experiment showed how other people can influence a person's behavior. However, people's behaviors can also shape how other people around them act. This is called reciprocal determinism.

As a result of completing this lesson, you could be able to:

Influences on Group Behavior in the Workplace

What is Psychoneuroimmunology? - Definition & Impact