Social conflict theory is a macro-oriented paradigm in sociology that views society as an arena of inequality that generates conflict and social change. Key elements in this perspective are that society is structured in ways to benefit a few at the expense of the majority, and factors such as race, sex, class, and age are linked to social inequality. To a social conflict theorist, it is all about dominant group versus minority group relations. Karl Marx is considered the 'father' of social conflict theory. Let's examine this perspective deeper and take a look at a few key definitions. 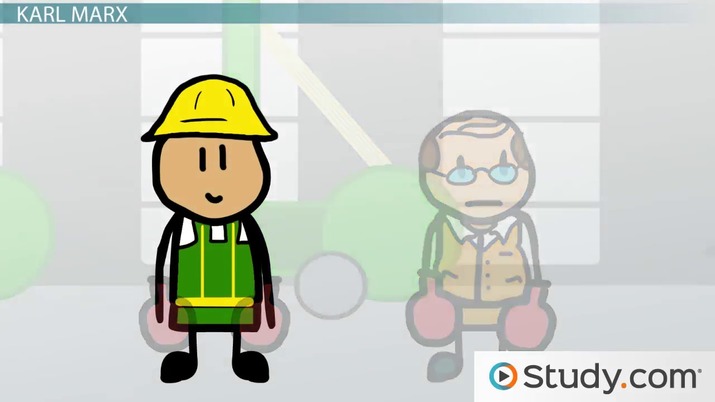 Try it now
Back
Coming up next: Matthew Effect: Definition & Examples

Karl Marx (1818-1883) was a German philosopher, sociologist, economist, and revolutionary socialist. Marx offered a theory of capitalism based on his idea that human beings are basically productive - in order to survive, people have to work. He also believed that people have two relationships to the means of production: you either own the productive property or you work for someone who does.

The clash between the owners and the workers is at the heart of Marx's thinking. In an industrial, wealthy, society, how can so many people be poor? At the heart of Marx's thinking is social conflict, which is the struggle between groups in society over scarce resources. Marx's primary concern, however, was class conflict, which arises from the way society produces material goods.

Karl Marx lived in the early stages of industrial capitalism in Europe. Marx believed the owners of these industries were the capitalists, those people who own and operate businesses in pursuit of profits. The system of capitalism turns most people in any society into proletariats, those people who sell their labor for wages. To Marx, such a system will inevitably lead to class conflict between the capitalists and proletariats.

Marx further believed that capitalism would lead to feelings of alienation for the workers. Alienation is the experience of isolation and misery that results from feelings of powerlessness. The only way to avoid this is to reorganize society. He imagined a system of economic production that could provide the needs of all members of society. In his view, socialism was the answer to the failings of a capitalist system.

The social conflict approach is a framework for building theory that sees society as an arena of inequality that generates conflict and change. Sociologists use the social conflict approach to study the ongoing conflict between dominant and more disadvantaged groups. Using this perspective, we can easily study the relationships between the wealthy and the poor, whites in relation to people of color, and men in relation to women. A social conflict theorist would argue that people in positions of power will try to protect their privileges, while the disadvantaged struggle to gain more for themselves.

Besides Karl Marx, important contributors to this perspective include W.E.B. Du Bois, who saw sociology as the key to solving racial inequality, and Max Weber, who introduced the 'Protestant work ethic' as an explanation for modern capitalism. Feminism, or gender equality, is also included under this perspective.

Social conflict theory sees social life as a competition and focuses on the distribution of resources, power, and inequality. Conflict theorists view society as an arena of inequality that generates social conflict and social change. Karl Marx is considered the father of social conflict theory. In doing so, he offered a theory of capitalism and class conflict between dominant and minority groups. Besides Marx, important contributors also include W.E.B. Du Bois, Max Weber, and various feminist thinkers.

With your classmates discuss the core concepts of social conflict theory and how it relates to change in society. Social conflict theorists maintain that conflict in society can generate change. Do you agree with them? Why or why not? Does social change only result from conflict? Can you think of an instance of recent social conflict that generated change? Do you believe that change to be positive or negative?

Karl Marx's focus on class conflict claimed that industrial capitalism benefited the few at the expense of the many. Do you believe that current-day capitalism does the same? Why or why not? Would socialism - an economic and political system in which the people own the means of production (the factories, for instance) and control the distribution of resources - also generate inequality and thus social change?

Use of Demographic Analysis in Political Planning

The Race-Conflict Approach in Sociology