Abby is one of the friends listening to Margaret's story. She is trying to be friendly, but Abby has never had a dishwasher. Abby has lived in other countries where dishwashers are rare. She currently lives in a small apartment. Abby's family has always hand washed their dishes. Abby likes Margaret, but she thinks Margaret sounds like a spoiled brat.

Abby's experiences and interactions lead her to believe that most people don't have dishwashers. Dishwashers are an expensive appliance and a luxury. If you have a dishwasher, it is an added convenience and not a necessity. It's a reasonable assumption that most people wash their dishes by hand. This is Abby's reality. Each woman constructs and rationalizes her reality through her social experiences with others. 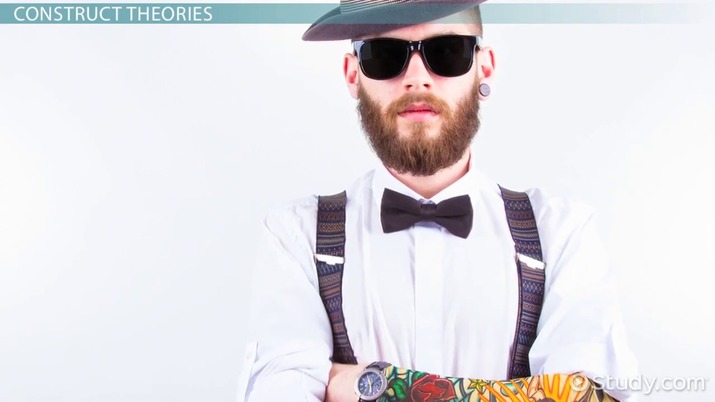 Coming up next: Presentation of Self: Methods to Presenting The Self

There are a few sociological theories that stem from social constructionism. Let's take a brief look at these.

This theory is used in the modern juvenile justice system. The juvenile justice system focuses on rehabilitating offenders and returning them to society as productive citizens. The system is careful not to label young offenders as 'criminals' because sociological research shows that people often live up to their labels. Those labeled 'criminal' are more likely to display future criminal behavior than those labeled 'rehabilitated.' People act according to their perceptions.

For example, let's say I've posted a job opening for a financial analyst at a large corporation. Bob comes in for an interview. I'm surprised, because Bob is wearing torn up jeans and a t-shirt. Bob has messy hair, an earring, and tattoos on his arms. Bob doesn't look like a corporate office worker to me. That's my subjective perception based on my past experience with corporate office workers. However, perhaps the objective reality is that Bob is an excellent financial analyst and will perform well in the corporate setting.

That brings us to symbolic interactionism. This sociological perspective says people assign symbols and create meaning based on their interactions with one another. This theory is closely related to social constructionism.

Symbolic interactionism is based on three tenets:

However, symbolic interactionism tells us that our meanings are often subjective. We behave based on what we believe to be true rather than what is objectively true. We behave according to the reality we've constructed. Doesn't that sound familiar? Social constructionism!

Let's review. Social constructionism is a sociological theory that examines the development of jointly constructed understandings. Generally, it means that people develop understandings by using experiences and interactions with other people.

The Thomas theorem is a sociological theory that says a person's reality will bring matching consequences. Generally, it means that people act according to their perceptions and their actions then make the perceptions real.

Symbolic interactionism is a sociological perspective that says people assign symbols and create meaning based on their interactions with one another.

Create a poster that lists and defines all the key terms from this lesson. They are highlighted in bold, so they are easy to find. Tip: Since it helps to have examples to go along with each definition, it can be useful to illustrate an example beside each key term. This works especially well for those who are artistically skilled.

For symbolic interactionism, you could draw caution tape around an area or object and illustrate a person (could even be a stick figure!) seeing the caution tape and realizing the need to avoid that area. This illustration would show how symbols have created meaning for people.

Write an essay of at least three to five paragraphs in which you describe a situation where you have encountered ethnomethodology. Tip: Refer back to the example provided in the lesson.

Write an essay that describes an example of social constructionism and how it is formed.

The essay could use a feature in a car to explain social constructionism. For instance, one person might consider heated seats or four-wheel-drive to be a necessity, while another person might view these items as frivolous.

Write an essay that explains how and why the Thomas theorem is used in the juvenile justice system. Tip: Be sure to include in your essay a broader explanation of how labels in general can be harmful to people. It may help to recall a personal experience in which you have been labeled.