What Is Social Control?

Social control is the active or passive process of a group regulating itself according to its beliefs, principles, and values. A major purpose of social control is to stop or prevent negative deviance, which is a break from established laws and values that may be damaging to others. Just keep in mind that what is considered normal, moral, valuable, ethical, or deviant varies from social group to social group.

That being said, there are two types of social control: informal and formal. Let's take a closer look at both of these. 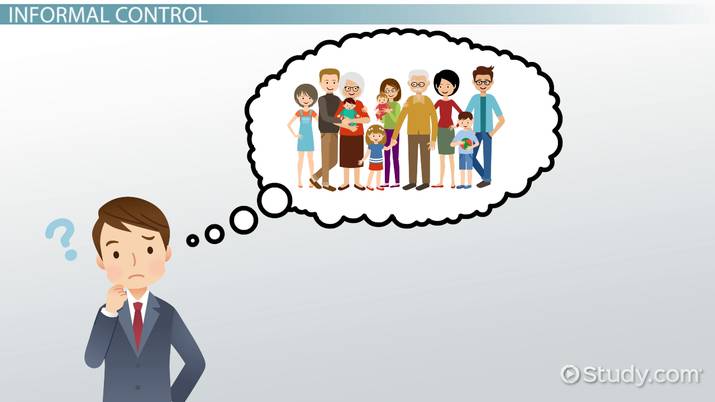 Coming up next: How Nationalism Impacts World Politics

Family, friends, and colleagues are three types of people that exert informal social control, a type of social control that stems from the approval or disapproval of people we associate with and consider important.

When we are growing up, it is our family that teaches us the foundations of what is 'normal' thought or behavior and what our values should be. These behaviors and values may be particular to the family or they can be particular to society in general.

Our family helps us develop and understand morals as well as the self or a conscience. This is the part of ourselves that exhibits self-awareness, is able to feel guilt, exercise self-control, and a lot more. Our friends and colleagues can do similar things. They can teach us important lessons, or they may exert peer pressure that will cause us to behave in different ways.

While friends, family, and colleagues often exert subtle or informal forms of social control that we may even choose to disregard, the same is harder to say for some types of formal social control. This refers to organizations or systems that use strict and delineated rules, values, morals, and the like that we are commonly told or compelled to obey.

Governmental social control goes beyond the legal system. Another example of this is healthcare. The government tries to persuade many of us to go get our teeth cleaned on a regular basis or go for an annual check-up. Why?

It's not because this type of social control tries to harm us. Social control isn't all about punishing people. It's about positive control as well, which refers to the concept of encouraging people to conform to proper values, such as taking care of one's health. In this instance, of course, keeping yourself healthy is in your best interest and in the best interest of the entire social group as it can help reduce healthcare costs and thus reduce strain upon an economy.

Social welfare in general is a kind of formal social control. While social welfare is there to help people, it is also there to defuse social unrest. Many a revolution has been started in countries where the government did next to nothing to provide for the poor in terms of denying them a safety net or even abusing the poor instead of providing for them.

Formal control also includes the mass media. Public opinion is often shaped by the media. We find role models through the media. The media tells us what is good and bad behavior.

In many societies, religion is an extremely powerful form of social control as well. Think about how many wars have been started in the name of religion or how many laws have been influenced by religion. Think about how some religions essentially prop up the status quo by preaching that things like poverty and war are present as a result of sinners and thus we should just accept the world as it is.

Education is yet another type of formal social control. Schools teach students behavioral standards, like how they should work or respect authority. Schools may also instill patriotism and teach their version of historical events that glorifies the nation's achievement but downplays, skews, or downright omits its failures.

Social control is the process of a group regulating itself according to its beliefs, principles, and values. A major purpose of social control is to stop or prevent negative deviance, which is a break from established laws and values that may be damaging to others.

What Is Social Structure of Society? - Definition & Theory

What is a Diversion Program in the Criminal Justice System?