Copyright
Lesson Transcript
Instructor: David White
Social deprivation can be analyzed by examining poverty, housing access, and exposure to crime. Learn about social deprivation, deprivation and exclusion, the deprivation index, and why the index is used. Updated: 11/23/2021
Create an account

What Is Social Deprivation?

Think of all the people that you know and interact with on a daily basis. These could include family members and friends, as well as co-workers, doctors, and even the wait staff at the coffee shop you go to. In different ways, each of these people contributes to who you are as a person, how confident you are, and the types of opportunities you will have in your life.

Now imagine that you didn't see these people regularly; this could happen for a number of reasons. Maybe you injured yourself and couldn't get around, or you're unemployed, or you don't have transportation, or you aren't openly accepted by many parts of society - how do you think this would affect you?

This disconnection from the larger society is known as social deprivation, and it can have serious consequences for those who experience it. Social deprivation is a broad and somewhat poorly defined umbrella term that refers to the combination of factors that prevent a person from having easy and frequent access to the many different aspects of their culture and society. 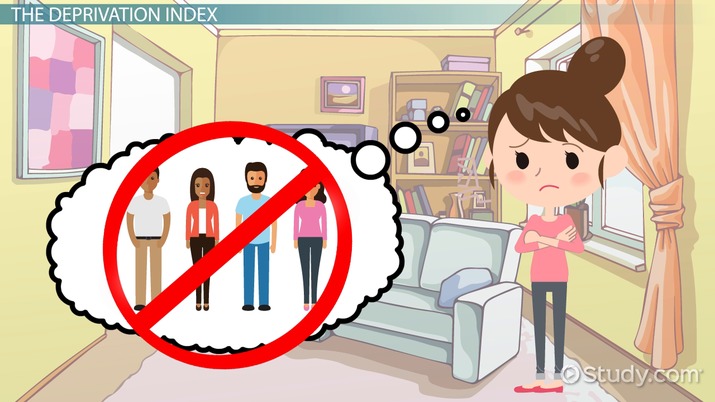 It is important to note that social deprivation is somewhat different from social exclusion, which refers to a person being shunned by his or her community or culture because of certain circumstances, traits, or characteristics. Openly gay men and women in the 1950s, for example, experienced social exclusion because they were rejected by society for their sexual orientation.

Despite their differences, however, social deprivation can lead to social exclusion if the deprivation becomes long-term. Say, for example, a person has symptoms of a chronic mental illness and they lack the income or insurance to access treatment. Their lack of income and insurance contributes to their social deprivation, but as the illness progresses, they may begin to act strangely or demonstrate a decline in interpersonal skills, which can lead to social exclusion.

Social deprivation and social exclusion both suggest that a person is being denied one or more fundamental needs, which is negatively influencing their lives and by extension, ultimately negatively influences the larger society. These experiences are often analyzed by governments or scholars in order to better understand the issue and find a solution. These analyses are sometimes referred to as a deprivation index. Broadly, the deprivation index is used largely in European countries to identify underserved or disenfranchised communities and populations.

Consider a single mother who is working two part-time jobs to pay the bills. Having no full-time job means that she probably doesn't have health insurance, she may or may not have reliable transportation, and she probably doesn't have any money available for socializing. Because people tend to use other social groups as a point of reference for their own position, this single mother would likely feel isolated and bitter because she is unable to access the same resources as others.

Two other important areas of the deprivation index are housing and exposure to crime, which may or may not be related in some way. Consider the previous example of the single mother, who is experiencing poverty and is not having her fundamental needs met. Given the lack of income and opportunity, she would very likely have a lack of access to adequate housing, possibly even living in a motel or homeless shelter.

Because there is a correlation between concentrations of poverty and crime rates, this single mother is probably exposed to criminal activity on a regular basis. This exposure can have a dramatic effect on her mental health and stress levels, particularly as it relates to her children's safety, and ultimately will affect her ability to work. In turn, those negative influences will affect her children and thus, the larger society.

Why Is the Index Used?

Once data has been collected and analyzed, the social deprivation index can provide valuable data on which individuals are in need of assistance and increased resources.

Because social deprivation can be self-perpetuating and often very difficult to overcome, there have been several experimental approaches to decrease the effects and negative outcomes associated. The High/Scope Perry Preschool program, for example, analyzed the role that preschool plays in the lives of children who are experiencing social deprivation outside of an educational environment. Researchers found that students that who attended preschool were far more likely to break out of the social deprivation cycle later in life than those who did not attend preschool, including receiving higher wages, being arrested less frequently, and developing a higher IQ.

Social deprivation is a term used to describe a person who is disconnected from his or her society and healthy social interaction for a variety of different reasons. In certain cases, if the social deprivation is chronic, it may affect a person's personality and interpersonal skills, which can lead to social exclusion.

Social deprivation tends to be self-perpetuating and can cause many problems for individuals as well as for the larger society. Because of this, the social deprivation index can help identify areas of need and inform experimental solutions, like the High/Scope Perry Preschool program.

Thalamus Anatomy, Function & Location | What is the Thalamus?

Pscyhotherapy Types & Approaches | What is Psychotherapy?