Cassie holds a master's degree in history and has spent five years teaching history and the humanities from ancient times to the Renaissance.

Different cultural, social, and economic influences impacted the formation of Romanesque arts such as literature, design, and architecture. Learn more about the early middle ages and significant events, the stabilization of England and France, the spread of Christianity, and what ''manuscript illumination'' is. Updated: 11/09/2021
Create an account

The Historical Context of the Romanesque Style 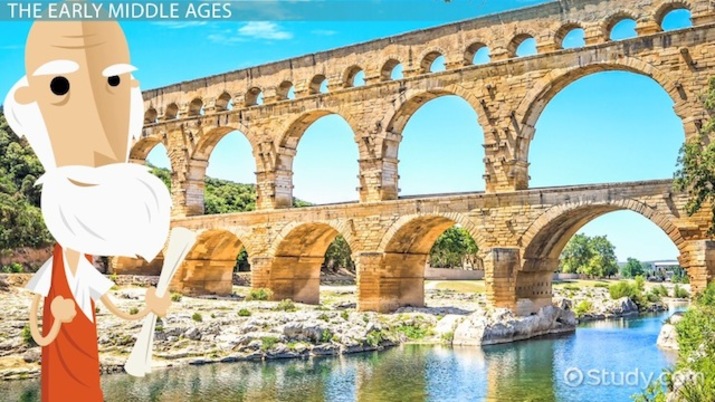 Try it now
Back
Coming up next: Regional Variations in Romanesque Figural Arts & Churches

If you lived in a Roman city at the height of the Roman Empire in the 1st and 2nd centuries CE, you would find yourself surrounded by large stone buildings decorated with rich murals and mosaics. Life-size and greater than life-size statues stand as decoration. Impressively engineered aqueducts bring in fresh water. Goods are traded throughout Europe. If you lived in Rome itself, you would be sharing it with more than a million other people.

Fast forward to the 5th century CE, when the Western Roman Empire falls and the Early Middle Ages begin. Many different Germanic tribes, which originate in Central Europe, have moved into the area. Instead of everything being ruled by a single organization, Europe is now divided among many different leaders who are warring with one another, pillaging each other's lands, and constantly pushing borders. Travel becomes dangerous, collapsing trade networks. Centers of wealth, the cities, become targets and are abandoned.

Now, you're living in a small community with structures built of wood. The statues are gone. Instead, art has become small and personal in the form of rings, belt buckles, ceremonial goods, purse covers, and so forth. Certain individuals had the wealth to afford such luxuries, but communities as a whole came nowhere close. Also, with so many people moving around, it made sense for artwork to be portable rather than monumental. The look of the artwork is also different. Germanic art is very abstract and stylized in comparison to the realism of Rome. That stylization will continue in medieval artwork for centuries.

By the 11th century CE, things had settled down. Relatively large territories, such as England and France, had stable borders. Cities began to form again, and trade increased, both of which improved the economy.

Stability also helped grow the population, which meant more people to farm. It also meant more people to come up with new farming technologies. The result was more food which meant even more people, and those extra people had time to be artists, engineers, and other professions. The High Middle Ages saw more stability, larger populations, improved economy and free time allowing for division of labor, and all of this encouraged developments in art and architecture.

Growth of the Church

When the Roman Empire fell, most of Europe was pagan. That is, they were not Christian. Throughout the Early Middle Ages, however, Christianity spread across Europe, and paganism was almost completely extinct by the time of the High Middle Ages. This gave the Church a lot of money and influence. They started building larger and larger churches. To do this, they needed new engineering techniques. More specifically, they relearned the techniques of the Romans. Thus, the evolving style became known as Romanesque, or Roman-like.

In fact, the Romanesque style is a fusion of ancient Roman ideas with the more abstract and stylized Germanic ones. Roman styles became an increasingly important influence going forward, and much of the emphasis comes from the Church.

Manuscript illumination is the art of decorating written documents, whether they be single sheets or entire books. During the Early Middle Ages, very few people could read or write. Those who could were almost entirely within the church. Even kings were generally illiterate. As such, nearly all illumination was done by the church.

In the High Middle Ages, more and more people saw value in being able to read. However, nearly all books continued to be produced by the church, generally in the form of Bibles, gospels, and psalters. The Bible is the holy book of Christianity. A gospel book contains four books from the Bible, the Gospels of Mathew, Mark, Luke and John. These are often considered the most important books of the Bible because they relate to the life of Jesus Christ. Psalters are copies of the Book of Psalms, another book of the Bible.

The Romanesque style emerged in the 11th century at the same time that Europe was transitioning from the Early Middle Ages to the High Middle Ages. There were many changes at this time, and these helped make the Romanesque style possible. This included more political stability, larger populations to provide labor, and growing economies to provide necessary resources.

The Church was particularly important in encouraging the development of the Romanesque style. In previous centuries, most of Europe was pagan, but by the 11th century, Christianity had almost completely replaced it. The Church's wealth encouraged the development of new technology and the desire for more expensive art.

Its near monopoly on learning meant that nearly all books were religious in nature in the form of Bibles, gospel books, and psalters. The illuminations within these books were the primary form of Romanesque two-dimensional art. The style of Romanesque art was influenced both by the Romans - as encouraged by the Church - and by the culture of the Germanic tribes which invaded Europe during the Early Middle Ages.

Discover your capacity to accomplish these tasks as soon as you finish the lesson:

The Influence of Monastic Orders on Romanesque Art & Architecture

Roman Basilica Concept, Architecture & History | What is a Basilica?