Access to education, healthcare, and clean drinking water are all measures of what we call development. In this lesson, we'll talk about a number of social and economic indicators, such as infant mortality rate, to assess the level of development in a given place. Updated: 04/30/2020
Create an account

Do you have access to clean, running water? Enough food to eat? Access to healthcare and education? These basic necessities are part of what we refer to as development, which broadly refers to the basic standard of living that people in a particular place have. Development refers to everything from access to healthcare and education to whether or not people have food and shelter. Development is a broad term, but it's something that agencies such as the World Bank and the United Nations are dedicated to increasing in countries across the world. Agencies like these seek to promote better lives for the world's poor, particularly in what we call underdeveloped countries, or countries with very low development.

So how do we measure development exactly? There are a number of different indicators that we use to understand the development of a particular country. Let's talk about this in more detail. 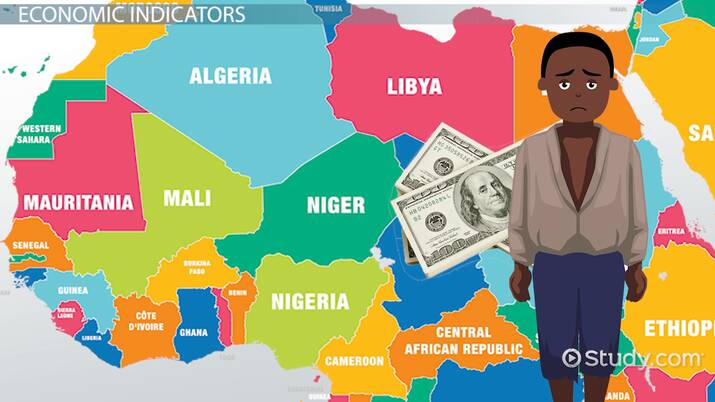 Coming up next: Gross Domestic Product: Definition and Components

When we talk about social indicators of development, we're talking about things that affect the well-being of individuals and communities. Social indicators are meant to help us understand how a community might be faring. One key measure of social development is access to healthcare. In many places inadequate access to healthcare leads to the prevalence of death by preventable diseases, such as diarrheal diseases. In many countries in the world, even access to things such as hospitable beds is limited. For example, in many parts of Africa there are fewer than 10 hospitable beds per 1,000 people.

Another major concern is access to appropriate sanitation. According to the World Health Organization (better known as the WHO), nearly a billion people lack access to a toilet, which consequently contaminates drinking water and spreads infectious diseases. This limited access to healthcare can lead to a high infant mortality rate (IMR), or the number of children who die per every 1,000 born. The IMR is highest in Sub-Saharan and West Africa, as well as parts of the Middle East. The highest IMR is in Afghanistan, where there are approximately 112 deaths per 1,000 births. Pregnant women often do not have access to things such as prenatal care.

Why is this a social indicator? Fertility is related to things such as access to birth control or education about family planning. This is often lacking in countries that are highly underdeveloped. This helps to explain why fertility rates are generally higher in developing countries.

Another important social indicator is education. Agencies such as the World Bank tend to measure this according to a country's literacy rate, or the percentage of the people in a country who are able to read and write. The lowest rates of literacy are found in parts of Africa, where in countries such as Niger, only about 17% of people ages 15-24 are literate. In many parts of Europe, however, about 90-100% of people are literate.

While these measures are troubling, there have been some important improvements. According to the United Nations, the number of people living in extreme poverty, or on two U.S. dollars per day, has declined. Enrollment in school in many developing countries has also increased. And, while it's still high in many places, the infant mortality rate has declined overall in the last few decades.

Agencies such as the World Bank and United Nations note the connection between lack of education and underdevelopment in the economy. In order to modernize the economy, countries must have a skilled and educated workforce.

All right, let's take a moment to review. Taken together, development refers to the well-being of people in a particular country across a number of indicators. Whether people have access to healthcare, education, or clean water are all related to development. Agencies such as the World Bank and the United Nations work to improve measures of development in countries across the world.

Social indicators of development refer to things such as access to quality healthcare or proper sanitation. Limited access to healthcare can lead to a high infant mortality rate, or the number of children who die per 1,000 born. Fertility rate, or the number of children born per 1,000 women tends to be higher in developing countries, as women tend to have more children, at least partially due to lack of access to contraceptives or education about family planning.

Literacy rate, or the number of people in a population who can read and write, is also much lower in developing countries. Lack of education contributes to low rates of literacy in many places.

Economic indicators such as gross national income (GNI), or the share each person has of a country's total income, also tell us about development. In poor countries, as you might expect, people have very small shares of the GNI. The type of production, or the economic sector, is also important. Poor countries in places like Sub-Saharan Africa often rely on agriculture, whereas wealthier countries have a more diverse economy.

While there's still much to be done in increasing development across the world, there have been some hopeful signs of improvement in health, education, and the economy.

The Changing Role of Women in Food Consumption & Production

Residential Land Use: Types of Housing

Evolution of the Contemporary Political Map

What is Chain Migration? - Definition & Examples