Representative Smith explains to the town hall participants that it's important to note that social insurance programs are not poverty or public assistance programs because the entitlement to benefits is not necessarily based upon need. In fact, some beneficiaries of Social Security retirement benefits are very wealthy. Benefits are based upon contributions made to the program by citizens and the occurrence of qualifying events. On the other hand, public assistance programs, such as food stamps, are based upon need. 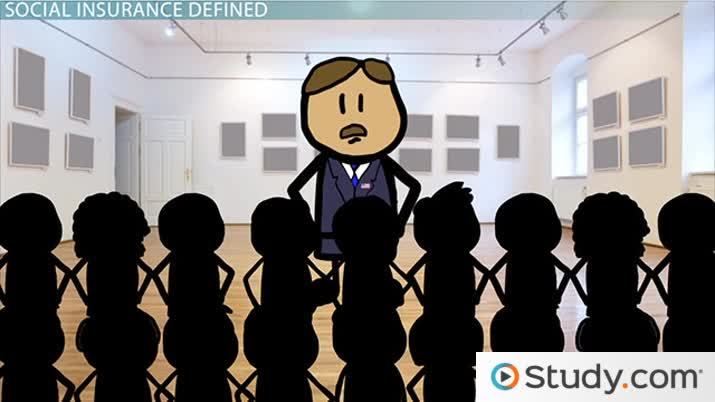 Nearly all of Representative Smith's constituents are covered under at least some part of the federal government's social insurance programs. In fact, you'd be hard pressed to find an individual who is not covered by at least one of these programs at one point in their lives.

Finally, David is eligible for disability benefits under Social Security Disability Insurance (SSDI). Individuals like David, who become unable to work because of a disability and expect to be disabled for at least 12 months before reaching the minimum retirement age for retirement benefits, may be eligible to receive SSDI payments. Disabled workers must have worked and paid into the Social Security program for a minimum amount of time to be eligible. This minimum amount of time depends upon the age of the worker at the time of becoming disabled.

Ally not only qualifies for old age retirement benefits but also Medicare. Medicare is a social insurance benefit added to the Social Security program in 1965 and is funded by a payroll tax. Medicare provides healthcare benefits for eligible participants. Most people who are at least 65 years of age are eligible, as are younger people suffering from certain disabilities, such as kidney failure.

During the tenure of President Barack Obama, numerous expansions have been made to Medicaid program. This expansion was made through the Affordable Care Act (ACA), commonly known as Obamacare. One of the key goals of the ACA was to make sure that as many people as possible had access to affordable healthcare. Prior to the ACA being implemented, there were roughly 46.5 million people without health insurance. The ACA tried to make healthcare more accessible by providing subsidies for health insurance premiums and by implementing cost-sharing reductions.

As a result of the ACA, more than 20 million people received health insurance in the period between 2010 and 2016. The law was considered highly controversial due to the individual mandate. The individual mandate enforced that you had to pay a fee equal to 2.5% of your annual household income in case you had the money to pay for healthcare, but choose not to do so. For most households, this meant paying almost $700 annually. While Congress repealed the individual mandate when Republicans won control of Congress after the 2016 election, the attempt to repeal the ACA was not successful. One of the main reasons for the popularity of the ACA was ensuring that health insurance companies could no longer deny people with pre-existing conditions access to healthcare.

Eugene is also one of Representative Smith's constituents. Unfortunately, Eugene lost his job recently due to a plant closing. Fortunately for Eugene, he is eligible for unemployment benefits. Unemployment benefits offer temporary payments to eligible people who have lost their jobs. Each state administers its own program subject to federal standards and approval from the Secretary of Labor.

While Eugene is eligible for unemployment insurance, not everyone is. All states generally require that an individual have worked a minimum amount of time and earned a minimum amount of wages before becoming eligible for unemployment benefits. Moreover, an individual must not have left employment voluntarily without good cause. In other words, if you quit just to quit or quit for no good reason, you will not be entitled to unemployment benefits. Of course, benefits don't last forever. Benefits usually end after 26 weeks unless the federal government extends the coverage due to severe economic downturns.

Elements of an Insurance Contract