Social networking is a necessary tool in the modern era of technology to create connections with the outside world for businesses and individuals. Learn more about it's definition, rules and professional use. Updated: 10/06/2021
Create an account

Overwhelmed Ophelia just graduated from college with a degree in business. She has been trying to find a good job to help her move out of her parents' house and into adulthood. The local library advertised a job counseling session, and Ophelia signed up right away. 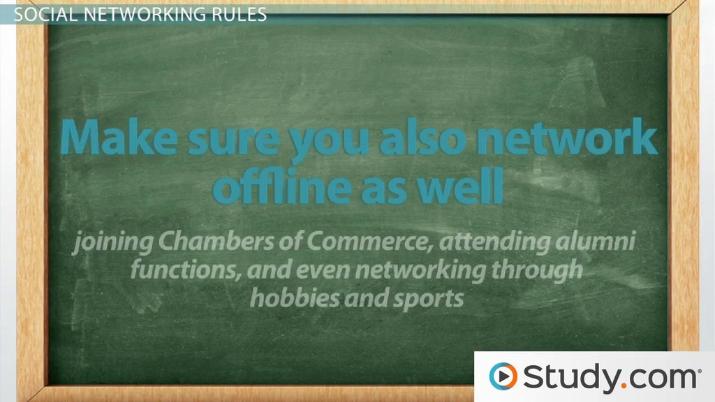 Coming up next: Informational and Analytical Reports: Definition and Uses

Linda explained that there are five rules for using social networking correctly. The rules are as follows:

Linda did recommend that Ophelia make sure that her Facebook profile is grandparent-proof, which means that there is nothing offensive on her page. Human resource managers and superiors will often check out sites, such as Facebook, to look for illegal or inappropriate activity. A person's entire social networking portfolio should be free from anything embarrassing or unprofessional. Items that could show a person's age, religion, political preference or sexual preference can also cause managers to not hire or fire someone.

Linda's second rule of social networking is to personalize invitations. In order for Ophelia to connect with people on business sites, she needs to send more than a generic invitation via email. She should remind the individual of where they met or conduct research on them so that she can speak to an accomplishment of theirs she admires.

Ophelia was very concerned about Linda's third rule of social networking. Linda told the group that they should ask for specific help when contacting an individual through business sites. For example, they could ask for a quick phone call to seek advice or even ask for the person to guest speak at a fundraiser. Ophelia felt that would be hard for her to accomplish. Linda suggested that she connect with people who had an entry-level job that Ophelia wanted herself. This way Ophelia could ask them for advice or an introduction to get the same job without her feeling intimidated.

Linda said that many people are obsessed with using only electronic means to communicate for business. Her fourth rule is to make sure that you network offline as well. She suggested joining chambers of commerce, attending alumni functions and even networking through hobbies and sports. Ophelia felt that she could talk to her gardening club and bowling league participants to see if anyone knew of a company hiring.

Her last piece of advice was to remain polite and always thank the business connection for their time. People are easily turned off with impolite or unprofessional social networking requests. Ophelia felt that she had a better understanding of how to start her social networking profile. She told Linda that she would return next week to learn about the different uses of social networking.

Ophelia was very excited for her second Saturday lesson with Linda the librarian in social networking. Linda began the class talking about the social networking uses for business. She explained that networks can be used to connect with customers, in traditional networking for jobs, promotions, contacts and marketing.

Of course, social networks are most used for traditional networking for jobs, promotions and connections. Linda showed Ophelia how to use LinkedIn to search for jobs in her area or leaders in her industry to try to connect with. She also suggested that Ophelia join industry groups on LinkedIn to stay educated on changes to her field.

Lastly, social networking can be a great marketing tool when used correctly. It can be used to target niche markets, communicate promotions and provide feedback. Linda demonstrated how a local real estate agent used Facebook to target advertising to recently engaged people or those that just had a baby. She thought they would be most in demand for purchasing a new home. Ophelia felt that she had learned enough to apply social networking to her business world.

Social networking is the ability to create a circle of business connections through the use of social media and traditional networking. There are five rules that business people should follow:

Social networking can be used for connecting with customers, traditional networking for jobs, promotions, contacts and marketing. Ophelia is now a master at using social networking correctly. She recently nabbed her first job through a connection she made at her bowling league. Turns out, a manager of a local beverage company bowled with her every week. She was hired as a beverage sales rep by the end of the month!