Lesson Transcript
Instructor: David White
Social pathology refers to deviant behaviors that often lead to violent crimes. Identify the theory of social pathology distinct from a medical illness, and how cultural factors can contribute to its onset. Updated: 11/10/2021
Create an account

What is Social Pathology?

If you spend much time watching television these days, you might have noticed a seemingly endless stream of police procedural shows shown on several different channels. In fact, not only are there several different shows on the subject, but an entire cable channel dedicated to true crime reality television. While some people may not be willing to admit it, the existence of these television programs suggests a growing fascination with criminal behavior and an interest in what causes people to commit such acts.

In the social sciences, deviant behaviors and actions, like violent crime, are known as social pathology. In medicine, pathology is the study of the causes and effects of illness, which is usually conducted in a laboratory environment. Applying that same concept to society, modern psychologists and sociologists have started to use the term social pathology to refer to problems or behaviors that violate social norms and often have a negative effect on society. 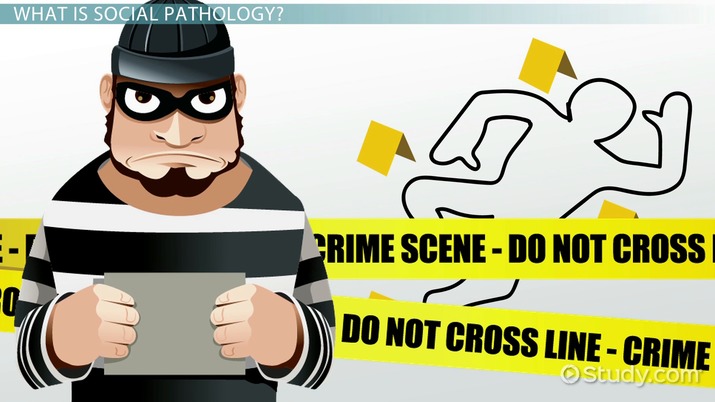 Coming up next: What is Research? - Definition, Purpose & Typical Researchers

In biology or medicine, when a living organism contracts an illness or virus, it may seriously weaken or die. In the study of social pathology, psychologists and sociologists think of societies as living organisms that need certain things in order to function properly. From their perspective, when a society contracts an illness or pathology, and if the cause cannot be discovered, the society can weaken or collapse.

For example, imagine if a particular society didn't view violence or murder as a deviant behavior. How long do you suppose that society would last? In this way, labeling an action as a social pathology helps to prevent widespread occurrences of harmful behaviors.

Although social pathologies are often framed within a negative context, some theories suggest they're also essential to societal survival. For example, 19th century French sociologist, Emile Durkheim, proposed that social deviance was a necessary element of the social structure. From Durkheim's perspective, deviations from social and cultural norms helped to strengthen the values of individual societies by clearly defining what was and what wasn't acceptable. Durkheim felt that the existence of deviant behaviors helped societies to identify the boundaries of acceptable behaviors and beliefs.

Early theorists in the 19th century believed that deviance was an inherited trait perpetuated through breeding. However, more contemporary social scientists have come to the conclusion that social deviance is the product of social factors, such as poor primary socialization. For example, if a person does not receive adequate messages about social standards and expectations early on in their lives, they will not form strong attachments or be able to internalize the values of a group. As a result, the consequences of engaging in social pathology will not act as a deterrent.

It is important to keep in mind that standards for social pathology are not static. Rather, they change and evolve along with societies and cultures. For example, until the 1970s, the American Psychological Association considered homosexuality to be a type of mental illness, or social pathology.

Modeled after the medical concept of pathology, social pathology refers to behaviors that violate social norms, and to the study of the causes of these behaviors. Often times, social pathology is a technical term used in reference to deviant behaviors, including domestic violence and murder.

As a theoretical framework, social pathology views these deviant behaviors as a kind of sickness that weakens society. French sociologist, Emile Durkheim, suggested that these negative behaviors play an essential role in society. Initially, professionals in the field believed social pathologies were genetically inherent, but modern social scientists believe they're produced through social dysfunctions, such as poor primary socialization.

Center of Population Overview & Median | What is a Population Center?

Importance of Specialization in Healthcare

What Are Organic Disorders? - Definition & Examples