My grandma always said people are like onions: you gotta peel them back to see what you're really getting. Unbeknownst to all of us at the time, her words had some science behind them. In fact, they were actually the core of what sociologists call the social penetration theory, which asserts that, as relationships develop, communication moves from somewhat superficial thoughts and topics to intimate and personal ones.

In today's lesson, we'll delve into the social penetration theory and how it plays out in interpersonal communication. For starters, the psychology team of Altman and Taylor authored the social penetration theory. As a duo, they're credited with the famous onion metaphor, the idea that personality is multi-layered. That our public selves are the outside layer, and our personal selves are the core. According to Altman and Taylor, penetrating someone's inner self takes lots of work. In short, they agree with my Grandma. In both friendship and romance, you have to peel someone back to get to really know 'em. According to the social penetration theory, this peeling of sorts goes through many stages, or layers. Deep, intimate relationships don't just happen. They develop as the participants disclose information about themselves. 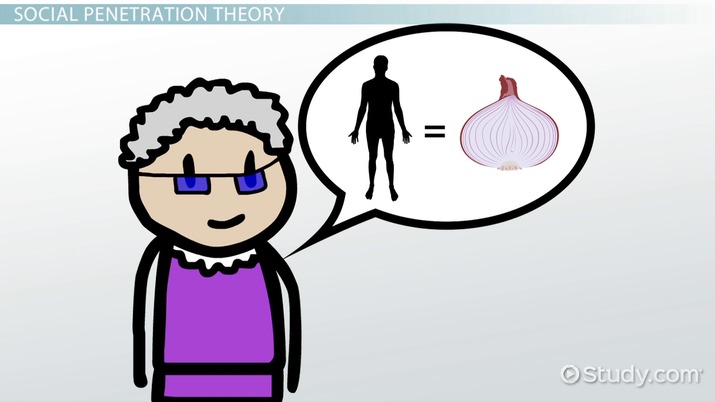 Coming up next: Relationship Rules Theory

Keeping this in mind, the first stage, or layer, in the social penetration theory is the orientation stage. Like the name implies, the orientation stage is the introductory stage. It's where we first begin to gather impressions of one another. It's the, 'Hello, nice to meet you' phase and the 'My name is. . .' phase. In the orientation phase, we show only our public selves and things are kept light. When someone asks, 'How are you?', we smile and say, 'Fine,' no matter if our dog just died, we follow the social norm of trading niceties. To do otherwise would seem awkward and out of place.

Now, if we seem to hit it off with someone during the orientation phase, we might decide to peel back the layer into the exploratory affective stage. In this next stage, casual friendships are born. We begin to reveal ourselves and our opinions, while also exploring those of our new acquaintance. No, we're not crying on each other's shoulders, discussing how our parents wounded us; that would be weird. Instead, we still stick to rather shallow waters, exploring safe topics like movies, sports or, perhaps, politics.

If both parties find enough to like in the exploratory affective stage, another layer is peeled, and the affective stage is entered. In the affective stage, relationships wade into the deep waters of self-disclosure and intimacy. Gone are plastic smiles and trite sayings. Whether the relationship is platonic or romantic, this is the stage where we sort of declare we're all in. We're willing to peel back our layers. Acquaintance is replaced by friendship and casual dating often moves to couplehood. Now when we have a bad day, we call each other and complain or cry. Simple 'I'm fine's are supplanted by 'I need you, and bring ice cream!'

If the affective stage is survived, we arrive at the stable stage of the social penetration theory. In this stage, our layers are pulled back and our true colors are shown. Pretense and posturing are no more. Hopes, dreams and disappointments are freely shared and secrets are revealed. Whether good, bad or ugly, all is out on the table.

Due to the amount of self disclosure the stable stage requires, it's not surprising that few relationships ever make it this far. After all, revealing one's self, allowing someone to peel your onion, requires both confidence and trust. However, once the stable stage is reached, sayings like 'We can read each other's minds' are often espoused. Rather than needing to hypothesize what their relationship partner is going to do or say, those in the stable stage can often foretell it. Like a faded pair of jeans or an old team sweatshirt, the stable stage brings predictability and comfort.

Unfortunately, not all relationships find eternal rest in the stable stage. Sadly, the theory also includes the depenetration stage. During this rather undesirable stage, which can occur at any time, the connection between the parties breaks down as one or both decides the negatives of the association outweigh the positives. Perhaps one gets too needy, or perhaps one just gets bored. Either way, phrases like, 'She's too clingy' or 'We just fell out of love' are hallmarks of the stage. Putting it succinctly, albeit coldly, the depenetration stage occurs as the onion is peeled, found wanting and returned to sender.

The social penetration theory holds as relationships develop, communication moves from somewhat superficial thoughts and topics to intimate and personal ones. The team of Altman and Taylor authored the social penetration theory. In it, they espouse the onion metaphor: the idea that personality is multi-layered; our public selves are the outside layer, and our personal selves are the core. In order to reach a person's core personality, a relationship travels through several stages. These stages are:

The Cultural Approach to Organizational Communication

The Theory of Social Presence

What is Leadership Ethos?

The Critical Approach to Organizations & Communication