What Makes a Person Abnormal?

Jazz has schizophrenia. Among other symptoms, he hears and sees things that aren't there. But, the hallucinations seem so real that he sometimes responds to them even without realizing that they aren't actually there. People around Jazz see him talking to imaginary people and think he's crazy. Many people are scared of him. People like Jazz experience the world differently than most people.

Abnormal psychology is the study of abnormal thoughts, behaviors, and feelings. Most people would recognize that Jazz is abnormal. After all, most people don't have hallucinations! But, what if Jazz didn't experience hallucinations? What if he just felt a little depressed? Would he still be considered abnormal? 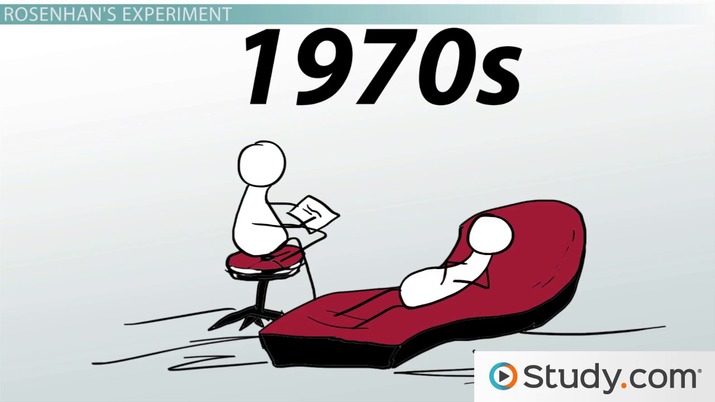 Coming up next: The Role of Social Networks and Support in Abnormal Functioning

Abnormality is often defined by how people act in the context of society's expectations. Everyone has certain roles that they are expected to play in society. For example, Zack is from a very traditional culture. Society expects that, because he is a man, he will provide for his family financially.

The label of abnormal can have serious consequences for a person. Once a person has been diagnosed with a mental illness, they can face discrimination and other issues that could prevent them from living a full and productive life. That's why diagnosis of mental disorders is so important. There are two major concerns when it comes to psychological labeling: whether or not the condition is actually abnormal and whether or not the diagnosis is accurate.

Think back to Zack for a moment. He's made the choice to be a stay-at-home dad, but his society thinks that this is not normal. Now, many people in the United States today would say that there's nothing wrong with him choosing to take care of his kids instead of working. So, is Zack abnormal? Should he be diagnosed with a mental disorder? These questions address whether or not Zack's condition (being a stay-at-home dad) is actually abnormal or not.

Remember Jazz? He's having hallucinations. Pretty much every society would agree that hallucinations are abnormal. But, there's another issue with diagnosing Jazz: there are several things that could cause hallucinations. So, how does his psychologist know that he's giving an accurate diagnosis?

Psychologist David Rosenhan was interested in that question. He wanted to know how accurate diagnoses of mental disorders were in psychiatric institutions. So, in the early 1970s, he set up a famous experiment to see how accurate psychiatrists were at diagnosing patients. What he found was shocking and went far beyond the diagnosis. Rosenhan and seven other people checked themselves into psychiatric hospitals by claiming to hear voices. That is, they were claiming to be suffering from auditory hallucinations. They did not display any other symptoms of mental illness.

Rosenhan had told his participants that they had to be released on their own. It took an average of 19 days for the participants to be released by the doctors, though one patient was held for 52 days! And, when they were released, the pseudopatients were given a diagnosis of schizophrenia in remission, meaning that the doctors still didn't recognize that they were not mentally ill.

For Rosenhan, this experiment raised serious questions about the reliability of psychological diagnoses. The patients were admitted to many different hospitals in different parts of the United States, so it couldn't be blamed on just one bad hospital staff. And, despite the fact that auditory hallucinations can be caused by relatively minor physical or psychological issues, every participant was given a serious diagnosis.

Finally, the fact that the pseudopatients were said to be 'in remission' when they were released highlighted that psychological diagnosis is often seen as a lifetime sentence, not a short-term issue. The stigma associated with mental illness can then follow a person around for life.

Though much has changed since the Rosenhan experiment was done, many of the issues are still problems today. Because there is a social stigma around mental illness, patients given mental health labels can feel the weight of those labels following them around. And, there are still issues surrounding the reliability of psychological diagnosis, since many psychological diagnoses rely on subjective judgments made by psychologists.

Abnormal psychology is the study of abnormal thoughts, behaviors, and feelings. Society and culture can play a role in whether a behavior is considered abnormal. David Rosenhan conducted an experiment to highlight the issues with psychological diagnoses and labeling. In his experiment, eight healthy adults were admitted into mental institutions and labeled with serious psychological issues despite a lack of evidence for the diagnosis.

The Sociocultural Model and Abnormal Functioning

What is Biopsychology? - Definition & Basics