Social sciences flourished during the 19th century, including the fields of history, anthropology, sociology and archaeology. Learn more about why this happened and discover the contributions of the various people from history who aided their revival and evolution. Updated: 10/05/2021
Create an account

History, archaeology, and the other social sciences are so ubiquitous today we don't even notice them. Whether it's television shows about our shared distant past or the continual dinosaur craze among elementary school boys, the fruits of our previous study populate today's modern consciousness. This, however, was not always the case. Only a couple hundred years ago, the social sciences were the purview of a select few - if anyone at all - and the public had very little interest in or time to devote to the advanced study of ourselves and our past. 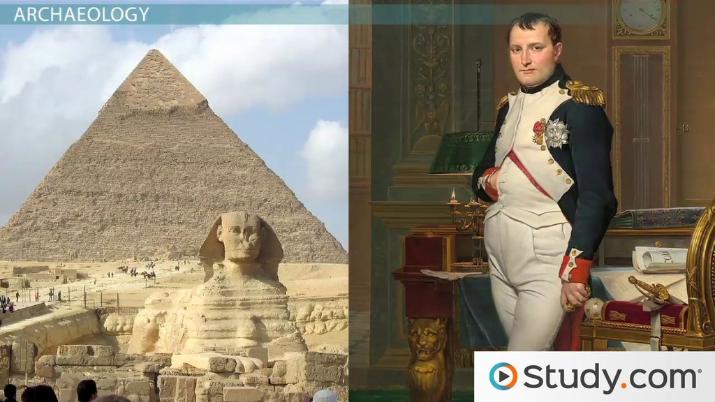 Try it now
Back
Coming up next: Tensions in Europe: Political, Social & Entangling Alliances

Much of this changed during the 19th century, when studying humanity in both its past and current states became far more popular among academics and scholars. Of course, 19th-century thinkers were not the first to begin thinking about these subjects, as notable Greeks, such as Plato and Aristotle, and Middle Age intellectuals, like the Arab Ibn Khaldun, also dabbled in the social sciences.

However, the Enlightenment of the 18th century and early 19th century fostered the growth of philosophical objectivity among scholars and the study of the natural world. Humans were increasingly considered part of this natural world, and as Darwin's theories concerning the evolution of man began to be accepted, the history and characteristics of the natural world became just as acceptable subjects of study as the more concrete sciences.

In addition to the growth of new ideas, 19th-century society had been in contact with other civilizations for over two centuries as the imperialist states of Western Europe spread their colonial grip over the world. As they learned more about the strange customs and practices of foreign lands, Europeans were left to grapple with the philosophical questions raised by the existence of cultures without any contact with Christianity or Western society in general.

More concretely, Europeans looked for scientific reasons for their perceived cultural superiority that allowed them to conquer and colonize the peoples who inhabited the far-flung territories. Out of these factors and others grew an increased interest in studying humanity, its growth, and its characteristics in all of its past, current, and possible future forms.

The first of these disciplines, and likely the one most practiced prior to the 19th century, was history. Indeed, various figures throughout history had attempted to collect information about the events and aspects of a certain nation or people's past and synthesize the information into a coherent story that explained the events. For example, Herodotus, a Greek historian of the 5th century B.C., documented and investigated the Persian invasions of Greece.

What changed in the 19th century was the technique of history. Prior to the 19th century, any book written about a past event and claiming to be accurate was generally considered history, regardless of the authenticity of the evidence used to substantiate the book's claims. However, this changed with the life work of a German historian, Leopold von Ranke. Von Ranke emphasized the heavy use of primary sources; that is, accounts of events written by eyewitnesses and those actually experiencing such events. Without these, von Ranke claimed, it was impossible to get to the truth of the actual events.

Though von Ranke's writing was not without fault (for example, he had a flair for dramatic literary devices), he was and still is considered the father of modern objective historical scholarship. Many consider his practices of historical scholarship the very things that changed history from a subject close to literature to a scientific discipline.

Unlike history, which needed significant tweaking to be considered a modern social science, prior to the 19th century archaeology did not exist at all. Indeed, archaeology, or the study of prehistoric human society and the artifacts it left behind, was only of interest to anyone after the evolutionary theories of Charles Darwin had been largely accepted by the intellectual community.

Archaeology owes a good deal of its 19th-century start to the exploits of Napoleon Bonaparte, who was enamored with Egypt. After Bonaparte's French armies took control of Egypt in 1801, Bonaparte led a second figurative army there shortly after - this one made up of over 500 hundred scientists, chemists, and other intellectuals. Bonaparte's massive excavations and findings of various artifacts of ancient Egypt, including the famous Rosetta Stone, spurred interest in not just ancient Egypt but ancient human society in general.

Perhaps nowhere did modern archaeological practices advance the furthest than in England during the 19th century. There, early amateur archaeologists, like Richard Colt-Hoare and William Flinders-Petrie, developed delicate excavation techniques that preserved the artifacts as much as possible during the digging. Additionally, these men and their colleagues also kept scrupulous records, which aided in the analysis of those items.

Much of this analysis and theorizing behind what the early archaeologists found was done by intellectuals engaged in a similarly new discipline: anthropology, the study of mankind's origins, development, and beliefs. Theorizing about humanity's past became necessary even before Darwin's evolutionary theories; in the early 19th century, archaeologists began discovering human remains and artifacts, which, even without the benefits of modern dating technology, were clearly far older than the Bible suggested they should be. Darwin's theories later in the century suggested a basic framework for how man evolved. From there, anthropology took the torch and attempted to explain how early human societies had formed.

19th-century anthropologists often explained early human society through the evolutionary lens, which was popular due to Darwin's theories. For example, early human technology and industry was first classified by the Danish archaeologist Christian Thomsen, who claimed humanity began in the Stone Age and then graduated over time to the Bronze Age and the Iron Age.

Darwinism was also used by early European anthropologists to justify the imperialism practiced by their countries. They often claimed they had triumphed over their colonies due to their cultural and social superiority and their society being objectively more advanced than that of their colonies.

Just as Western intellectuals were beginning to theorize about humanity's earliest societies, scholars were beginning to discuss where contemporary society was headed. Sociology, the field of studying current society and possibly predicting future society, was pioneered by the Frenchman Auguste Comte, who coined the term in 1838. Comte believed that the scientific principles and objective investigation scientists were using to discover the universe's natural laws could similarly be applied to analyzing society. He envisioned a world where the leading men of society enlisted an army of sociologists to help educate the populace and improve living standards across society.

As a fledgling discipline, sociological works in the 19th century often included strains of other disciplines, such as history and philosophy. Much of Karl Marx's work, for example, is often simultaneously classified as philosophy, economics, and sociology. Like Marx's work, most early sociological works identified inequalities or wrongs in society as perceived by the author, while also proposing future fixes to these problems. By the late 19th century, sociology began to be taught in many Western universities.

History, archaeology, anthropology, sociology - these are all disciplines with which most of us have some familiarity today. However, without the pioneering work of von Ranke, history may still be the purview of story and literature rather than an attempt to understand the facts of the past objectively. Indeed, without the theories of Darwin and the early work of 19th-century archaeologists and anthropologists, we may not know nearly as much about the development of human civilization as we know today. Sociology, as well, challenges us to recognize the problems of modern-day society and do something about it in the future. These important, cerebral pursuits all experienced important formative periods during the 19th century.

How to Make a Timeline

Interdisciplinary Connections in the Social Sciences

History as a Discipline: Overview & Examples | What is History?

How to Make a Timeline

Interdisciplinary Connections in the Social Sciences

History as a Discipline: Overview & Examples | What is History?