Socrates is considered the Father of Philosophy. Learn what is known about the beliefs and life of Socrates, discover the Socratic Problem, and explore an example of a Socratic dialogue. Updated: 10/22/2021
Create an account

What We Know of Socrates

It is difficult to say anything certain about Socrates. Though he is considered the 'Father of Philosophy,' Socrates himself never wrote a thing. What we know of him comes from the accounts of his friends and students writing long after his death.

Despite this limitation, we are fairly certain about a few things. We are pretty sure that Socrates was born in Athens around 469 B.C. He may well have followed his father's trade as a stone mason. He probably served in the Athenian army at some point in his life.

In his later life, Socrates apparently was a man of some importance. He was a member of Athens' Boule, a citizen council that voted on important matters of state.

Sometime along the way, Socrates became interested in philosophy.

Though his ideas earned him many friends and students among the elite of Athens, Socrates seems to have also upset a lot of people with his philosophical inquiries. Socrates was brought to trial in 399 B.C. under charges of corrupting the youth of the city. He was found guilty and sentenced to death by drinking hemlock poison. 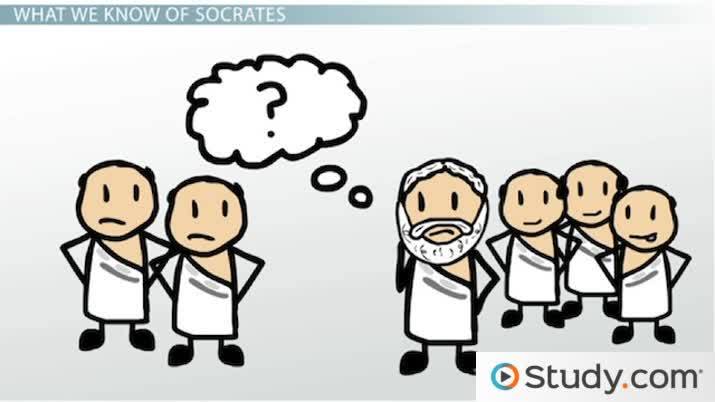 Coming up next: Platonic Idealism: Plato and His Influence

That is what we know about Socrates, but this short account raises as many questions as it answers. What was Socrates' philosophy? Why did the Athenian city state consider Socrates so dangerous? And, finally, why did his successors consider him so important?

To answer these, we must attempt to draw reliable information from some obviously biased and often clearly fictitious sources. This issue is known as the Socratic Problem. Though several ancient authors mention Socrates, our primary source is his student Plato. We have two good reason to distrust Plato's accounts of Socrates.

The first is obvious. As Socrates' student, his account is clearly biased in his master's favor.

From this evidence, scholars believe that Socrates' contribution to philosophy was a way of asking questions, questions which his successors then tried to answer.

Let us therefore look at those early dialogues and their questions. Discussion of the later dialogues can be found in our lecture on Plato. Socratic dialogues go something like this:

Socrates: I'm sure glad I ran into you. I have a question for you about piety and I know you to be a very pious man. Everyone in town says it - 'that Fred, he's a pious one.' And I'm so stupid, I don't know anything about piety, and I thought that you, the great Fred might tell me something about piety.

Fred: Very well, Socrates. What is your question?

Socrates: What is piety?

Fred: Piety is what I'm doing now. I'm on my way to the temple to worship Zeus.

Socrates: That's just an example of a pious action. What is piety?

Fred: Um, piety is doing what pleases the gods.

Socrates: Ah, that's much better, a good general statement…but don't the gods sometimes disagree? Like, things that are pleasing to Artemis might not be so pleasing to Aphrodite? Work at cross purposes, you see.

Socrates: But you just said that piety is what all the gods agree is pleasing.

Socrates: Hmph, I guess I'll never know what piety is.

While Socrates may have learned nothing from this exchange, we can learn a great deal. First, we can see why Socrates was considered something of a nuisance by the important people of Athens. Even if he didn't make their heads explode, he certainly raised some serious doubts about their ideas. The fact that he did so in a public place only made it more embarrassing.

Second, Socrates rarely offers his own ideas. Instead, he looks for flaws or inconsistencies in the ideas of others. This is the heart of Socrates' philosophy. Socrates knows that he knows nothing, whereas everyone else is under the mistaken impression that they know something.

Rather than be satisfied with whatever answer sounds good, we should look more closely at the things we call 'true.' This is complicated by the fact that big ideas, like piety, are not easily defined.

Socrates also raised the point that the truth may not be readily apparent to our senses. Just because something seems true doesn't mean it is true. For evidence, Socrates notes that many learned people believe things that are not true. In pointing out these problems, Socrates established a distinction between knowledge and belief. Knowledge is always true, while belief is only true for some people, some of the time.

This distinction seems natural to us today. It was not so warmly received in ancient Athens.

For though we share much in common with the Athenians (e.g., democracy and voting), we often fail to recognize the differences. For us, things like voting are matters of patriotism. For Athenians, these were deeply religious matters. Everything important in Athenian society drew its authority from some religious ground. Every tradition had an accompanying myth. Every public post was a sacred office. And now, here comes this annoying old man, asking all sorts of questions that no one can answer.

What made Socrates so threatening was the fact that matters of faith fail his standard of truth. Every religion in the world is full of contradictions. By questioning religion, Socrates is essentially undermining the foundation of his society. No one knows how people will behave without the constant fear of being smitten by some god to keep them in line.

So the Athenians made the worst decision they could have made. They took an annoying old man, and turned him into a martyr. This got all of his friends upset. Plato got mad enough to write dozens of books about him, to ensure that those dangerous ideas lived on. In the meantime, he created the foundations of western philosophy.

And when Plato's student Aristotle parted ways with his master, it was on the grounds that Plato, too, had failed to meet Socrates' standard of truth. Indeed, all of Western philosophy can be interpreted as answers to the puzzling questions asked by Socrates, from Plato to Rene Descartes. At the end of this lecture series, we will see how Francis Bacon, the father of the scientific method, was really in essence inventing a way to finally meet Socrates' lofty standards for truth.

The Birth of Philosophy: The Presocratics

History of the Alphabet: From Cuneiform to Greek Writing

David Hume & the Lack of Self

Platonic Idealism: Plato and His Influence