Soil conservation is a method of fighting soil erosion with sustainable soil use which keeps the soil healthy and balanced. Study the causes and effects of soil erosion, and learn about preventing soil erosion and conserving healthy soils. Updated: 09/20/2021
Create an account

Soil is a mixture of mineral and organic material that covers Earth's surface. It is very complex, takes a very long time to form, and is incredibly important to sustaining life on Earth since soil is where decaying material is recycled into usable nutrients. Because soil is so important to both plants and animals, it makes sense that we would want to protect it from erosion, which is when soil is transported and removed by water or wind. Erosion is a natural process, but it is also expedited by human activities, such as farming, logging, urbanization, and commercial development.

Agriculture causes erosion through excessive plowing, overgrazing land with too much livestock, and removing vegetation, such as with clearcutting. It can also cause erosion because crops use the nutrients in the soil to grow. If you own a pet, you know that your pet requires different food and nutrients than you do. Plants are the same way; different plants eat different nutrients from the soil. So, if the same crops are grown year after year, specific nutrients may become totally depleted from the soil, which decreases the richness of the soil. And, when this happens, soil is more easily washed away by wind and water.

Logging increases erosion rates because it removes the roots of trees, which act as anchors and help hold the soil in place. Without these roots, the soil is exposed to wind and water and therefore more easily removed. When areas are urbanized or commercially developed, soil is eroded because the land is stripped of the vegetation and then reconstructed. Not only is the natural vegetation altered, but new drainage and sewage flows are created, and paved roads create impervious surfaces that funnel water, which is one of the major erosion factors. 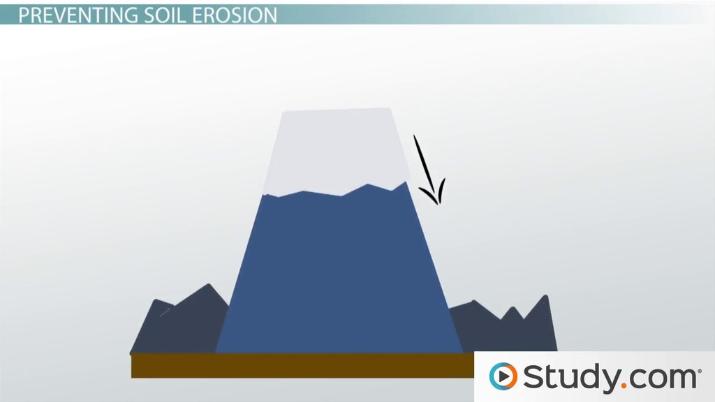 Try it now
Back
Coming up next: The Dynamic Earth: Internal & External Forces that Shape Earth's Surface

So, now that we know what causes soil erosion, let's examine what effects this erosion may have. You now know that soil erosion means that the land is being removed. This creates problems because much of the land is agricultural land, which is what we need for growing crops. Land that people live on is also being eroded, which creates some pretty dangerous situations. Landslides are very common in areas that have been logged because the land is so drastically altered that even something as small as a thunderstorm can wash incredible amounts of land downhill.

Soil erosion also creates water pollution. The sediments that are being carried away often end up in streams, rivers, lakes, and oceans. These sediments carry with them all of the fertilizers, pesticides, leaked car fluids, and other toxins present, and then transport them into aquatic systems. This not only creates unsafe drinking water for humans, but also creates unlivable environments for the fish, mammals, reptiles, and other organisms that call these places home.

In much the same way that water becomes polluted, air can also become polluted from soil erosion. Instead of the polluted particles being carried off into rivers and streams, they are carried off into the air that we breathe. They may also end up in the water at some point if those particles get taken up into rain and snow clouds, which then drop them back to Earth and into aquatic systems.

As you can see, soil erosion is a dangerous problem, but there are many ways to prevent it. Let's look at a few of them.

Farmers may use land use methods that allow them to grow crops while minimizing the loss of soil. Do you remember when I said that planting the same crop year after year depletes the ground of nutrients? Well, crop rotation is the practice of planting different crops each year to reduce nutrient depletion. Different crops use different soil nutrients, and by changing crops from time to time, the soil has a chance to recharge its nutrient load.

Farmers may also use contour farming, which is plowing and planting along the land's natural contours. Think of this like a long road winding down a mountain side. Instead of the road going straight down, which would be a pretty quick trip down, the road winds along the natural contours of the mountain. When water is forced to travel this way, it slows down much like you slow your car down as you navigate these twists and turns. This gives the water time to seep back into the soil, which helps keep both the soil and its nutrients in place.

Similar to contour farming is terracing, which creates a series of platforms along a sloping edge to prevent runoff. Again, think of yourself going down a steep slope, but this time you have the option of a steep ramp or some stairs. Going down the stairs will be a slower trip because instead of a straight path down, you have to take each step carefully. Water does the same thing with this type of agricultural design.

Windbreaks are often used in agriculture to prevent soil erosion and are just what they sound like: areas that reduce wind exposure to crops. Much like a nice jacket protects you from strong winds, the tall trees that are planted on the windward side of crops act as windbreaks around farm fields. Another method farmers may decide to use is no-till farming, which is when crops are replanted without tilling the ground and therefore without disturbing the lower soil layers. A major benefit of this practice is that nutrients from the previous year's crop are able to break down and return to the soil, reducing both erosion and the need for fertilizer.

Besides shaping the land to slow wind and water, planting vegetation is one of the best ways to prevent soil erosion. Plants create a matrix of twists and turns underground that soil has to find its way through if it wants to move. Without these obstacles, soil moves much more easily with wind and water. Plants also act like giant umbrellas, protecting soil from wind and water coming from above. Instead of being able to crash straight down onto the ground, rainwater and winds get slowed by all of the leaves and branches above the soil.

While erosion prevention is important, soil conservation goes beyond just keeping soil in place. Soils need to be healthy and balanced with the right amount of nutrients. Let's now look at some conservation methods for maintaining soil health.

Organisms within soil are a main factor in soil health. Small organisms like worms, bacteria, and fungi help break down decaying material and turn it back into healthy, nutrient rich soil. This is nature's way of tilling soil, which feeds the plants and animals above ground.

Salinity is the amount of salt in the soil, and this also needs to be maintained for healthy soils. While some plants are adapted to very salty soils, most are not. When soils are too salty, plants die, which then increases erosion because of the loss of vegetation.

Soil erosion is when soil is removed and transported by water or wind. Though this is a natural process, it is also influenced by improper land use. Soil erosion leads to dangerous situations, such as loss of land for food and homes, landslides, and water pollution. However, erosion can be prevented through proper land use and farming practices, such as contour farming, terracing, windbreaks, and planting vegetation. Maintaining healthy soils is also important, and this can be achieved by monitoring soil organisms, soil pH, and soil salinity.

Soil is important to all of us because it provides a home for plants, animals, and other organisms that we depend on for survival. From the plants and animals, we get food, clothing, shelter, and a variety of other things. Soil conservation is therefore something we should all be aware of and take an active role in.

After you have completed this lesson, you will be able to: