Josh has taught Earth Science and Physical Science at the High School level and holds a Master of Education degree from UNC-Chapel Hill.

An object's state of matter as a solid, liquid, or gas is determined by how close its atoms are to one another. Explore the properties of the three states of matter and how particles of matter move in solids, liquids, and gases. Updated: 12/07/2021
Create an account

Every material on Earth can be classified into one of three states of matter. Matter is anything that is made up of atoms, and the state an object is in depends on how close together its atoms are. Atoms are the basic building blocks of all materials on Earth (and everywhere else). You can't see atoms because they are incredibly small. Even microscopes can't see atoms unless they are very high quality (and very expensive).

Let's take a look at the three main states of matter and how close their atoms are together. 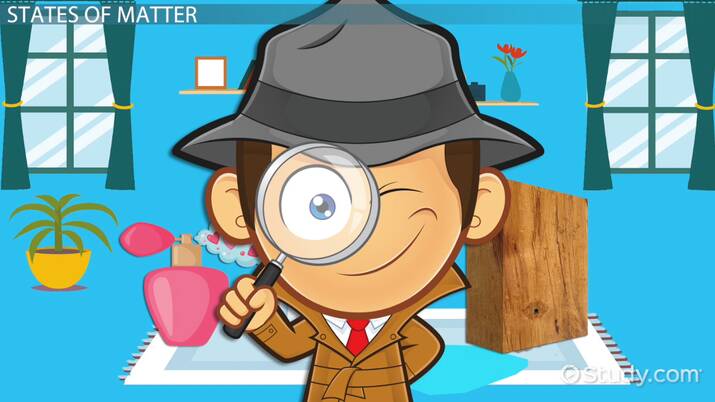 Coming up next: Gas Lesson for Kids: Definition & Facts

Why didn't the wood block in our opening example make a mess like the water? In solids, the atoms are tightly packed together in a material. They are so close together that they do not move very much and will stay the same shape even if you put the solid somewhere else, like on a table. You will know something is solid because it is generally hard and keeps its shape, even if it's in a container with a different shape, like a round ball in a square box, or falls out of its container to the floor.

Look around the room and find three items that are solid. Hint: You're probably sitting on one. Wood, metal, and cardboard are common solids.

Grab a towel! When you spill a liquid, it goes all over the place. Liquids have atoms that are close together, but not as close together as in a solid. The atoms slide around each other, which makes liquids lose their shape if you change the container they are in. For example, if you pour a liquid from a cup onto a table, the liquid will no longer be shaped like the cup. It will now form a flat puddle on the table.

Can you find three liquids in the room that you're in? Water, juice, and honey are common liquids.

Can you smell something? If you let some perfume out of its container, you can! In gases, the atoms of the material are very far apart. They are so far apart that they bounce around.

Gases are usually light and also change shape when you change the container they're in. In fact, they take the same shape as their container. This is why the perfume spreads out - to take the shape of the room.

You breathe gases in when you take a breath. You probably can't see any gases in the room you're in, but can you think of some? Oxygen and helium are common gases.

There are three states of matter: Solids, liquids, and gases. The state that an object is in depends on how close together its atoms are.

In terms of solids, they're generally hard, keep their shape and have tightly packed together atoms. Examples include wood, metal, and cardboard.

In terms of liquids, they have atoms that are close together, but not as close together as in a solid, and that slide around each other. Examples include water, juice, and honey.

Finally, in terms of gases, the atoms of the material are very far apart. Examples of gases include oxygen and helium.

Properties of Solids: Lesson for Kids

Types of Force Lesson for Kids