Matthew Hill received Bachelor of Arts in Religious Studies and Psychology from Columbia International University. Hill also received an M.A. and Ph.D. in History from Georgia State University. He has over 10 years of teaching experience as a professor and online instructor for courses like American History, Western Civilization, Religious History of the United States, and more.

Influential among abolitionists, Solomon Northup's bestselling biography ~'Twelve Years a Slave~' shares his story of being kidnapped as a free man and then enslaved. Learn a summary of Northup's biography and his general experiences, a profile of plantation life, of his release and freedom, and the impact of the book. Updated: 11/13/2021
Create an account

The narrative Twelve Years a Slave tells the incredible story of Solomon Northup, a free Black man who was kidnapped and enslaved by southern slave traders before regaining his freedom 12 years later.

Solomon Northup was born to a free family in July 1808 in Minerva, New York. His father, reared in slavery, was freed after his master's death. The young Northup grew up on his father's farm and received a basic education. He married Anne Hampton in 1828, and they later moved to Saratoga, New York.

He was a talented fiddler and was offered a job in a traveling circus by two gentlemen. Traveling to Washington D.C., he was drugged, forcefully sold into slavery in Richmond, and then shipped to markets which traded enslaved people in New Orleans. He spent the next 12 years trapped in slavery in Louisiana before finally securing his liberation. His book, Twelve Years a Slave was published in 1853, a firsthand account of his experiences. 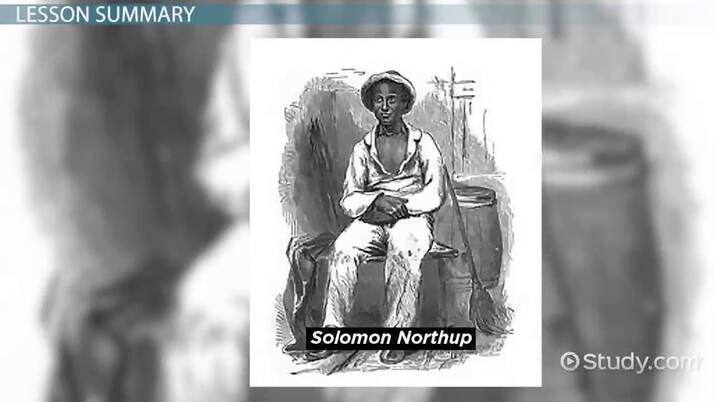 Coming up next: A Century of Dishonor: Summary & Author

In his book, Northup tells his harrowing tale of his experience with slavery. His first owner, William Prince Ford, treats him fairly well, according to Northup. Mired in debt, Ford sells him to John M. Tibaut in 1842, who is relentlessly cruel. Oddly, Ford still retains 40 percent of Northup given his debt was less than the value of Northup. Northup recounts that one day, Tibaut tries to whip him, but he resists so much that Tibaut tries to lynch him, or kill without a fair trial. Anderson Chaffin, who works for Ford, rescues Northup. After a second altercation, Tibaut sells Northup off to someone else.

Northup is then sold to Edwin Epps, who he works under for the next ten years. Epps is cruel as well, and often leases Northup to other plantations, using him to oversee other enslaved people. The wily Northup escapes several times but is always re-captured. His fortune suddenly changes in 1852 when an unlikely visitor comes upon the plantation, as we shall soon see.

A good way to understand Northup's viewpoint is to let him speak for himself. Compared to Tibaut and Epps, Northup writes charitably of Ford. He describes Ford as kind, noble, and candid, though he admits that, ''He never doubted the moral right of one man holding another in subjection. Looking through the same medium with his fathers before him, he saw things in the same light. Brought up under other circumstances and other influences, his notions would undoubtedly have been different.'' Ford then, is kinder than the others but limited in his moral vision.

Northup is less charitable toward Tibaut for good reason. Describing the first incident when Tibuat tries to beat him, he writes:

''He was my master, entitled by law to my flesh and blood, and to exercise over me such tyrannical control as his mean nature prompted; but there was no law that could prevent my looking upon him with intense contempt. I despised both his disposition and his intellect.''

His longest relationship is with owner Epps, but even his first impression is negative. He states that:

''He has the sharp, inquisitive expression of a jockey. His manners are repulsive and coarse, and his language gives speedy and unequivocal evidence that he has never enjoyed the advantages of an education.''

Northup seemingly has him pegged correctly, given his horrid treatment of Northup and others.

As mentioned above, Northup's fortune suddenly changes when abolitionist Samuel Bass visits Epps's plantation; abolitionists were individuals who fought to abolish slavery. Northup manages to persuade Bass to take letters to his family in New York and alert them as to his whereabouts. His wife Anne immediately enlists the help of his longtime lawyer friend Henry Northup. New York governor Washington Hunt helps secure letters of support from Louisiana Senator Pierre Soule and a Supreme Court Justice. Armed with several legal papers, Henry goes to Louisiana and secures his release in January 1853 on the defense that Northup had been kidnapped and was, therefore, not legally enslaved.

As Northup puts it: ''It was necessary to establish two facts to the satisfaction of the Governor: First, that I was a free citizen of New-York; and secondly, that I was wrongfully held in bondage.''

Solomon was reunited with his family in late January 1853.

Impact of the Book

With the help of co-writer David Wilson, Northup publishes his famous book of his experiences. He dedicates his book to Harriet Beecher Stowe, the author of Uncle Tom's Cabin. His book sold more than 30,000 copies in the first three months. It is of great historical value not only because it is a firsthand account of slavery but because it discusses smaller details such as plantation life, culture, food, customs, and the day-to-day rhythm of work.

Given his experiences, he became a popular lecturer in abolitionist circles. He also worked on behalf of the Underground Railroad in relocating people to Canada who had been held in slavery. Mysteriously, his last public appearance was in Ontario, Canada, in August 1857. After this, his whereabouts are unknown, and his death unrecorded by anyone, though census records indicate he likely died by 1860. It remains a mystery to this day.

Let's take a couple of moments to review what we've learned.

Solomon Northrup was a free Black American man who was kidnapped and enslaved by southern slave traders before being freed 12 years later. His memoir Twelve Years a Slave provides a powerful firsthand glimpse into antebellum slavery. It proved a colorful account of slavery on so many levels.

At its most basic level, it is biographical in nature. Northup also pays attention to the mundane, such as work schedules, food, crops, and the daily routine of plantation life in Louisiana, which included things like lynchings, or killing without a fair trial. His description of the likes of Ford, Tibaut, and Epps further provide a powerful look at the face and personality of owners of enslaved people. His run-in with the abolitionist Samuel Bass helped secure his eventual release.

His book became a best seller and was highly influential in abolitionist circles (remember that abolitionists were individuals who fought to abolish slavery). This included the abolitionist and reformer Harriet Beecher Stowe, to whom Northrup dedicated his book. It remains to this day a powerful retelling of American slavery.

Ethos, Logos & Pathos | Ways to Appeal to an Audience in Writing

Symbols in Their Eyes Were Watching God

What Is Slavery? - Definition & Abolition