To solve word problems, even the more complicated ones, follow these three steps: visualize the problem, write the equations, and solve the equations. Learn how to solve multi-step word problems by applying the three-step process, and understand the example. Updated: 10/05/2021
Create an account

This might sound repetitive, but don't be afraid of word problems. You've probably heard that before, and it's true. Don't shy away from these problems. Face your fear! Once you tackle word problems using the steps to solve a word problem, you will be that much stronger!

Let's find out. We will use these steps to help us solve a somewhat complicated word problem. 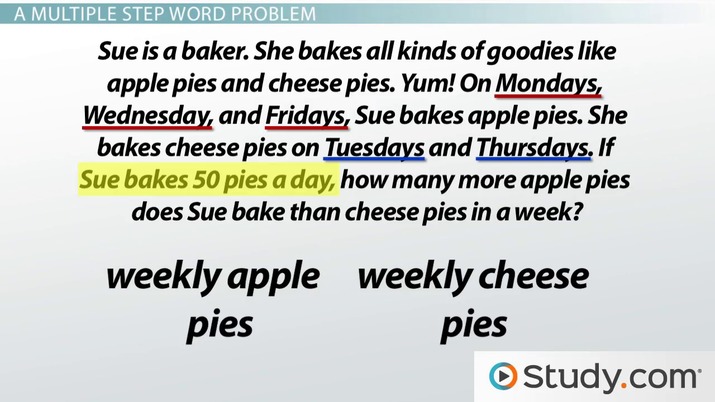 Coming up next: Restating Word Problems Using Words or Images

Our first step in solving this word problem is to visualize our problem. What's going on? The best way to do this is just to picture a little cartoon show in your head of what is going on. We see a little Sue the baker baking pies. Three days a week, she is baking apple pies. The other two days of her workweek, she bakes cheese pies. So, she spends more time baking apple pies than cheese pies.

We also learned that we can apply these steps to multiple-step word problems. We just need to keep in mind that we may have to do our problem in parts. We may have to perform one operation first followed by another to find our final answer. But the more we practice and the more visualization we do, the better we will get.

When you are done with this lesson you should be able to recall and use the three step process to solve word problems.

What is a Benchmark Fraction on a Number Line?

How to Put Numbers in Order

How to Measure & Calculate Elapsed Time

What is Repeated Subtraction?

What is an Improper Fraction? - Definition & Example

How to Solve Systems of Linear Equations by Graphing

What Are Mixed Numbers? - Definition & Examples

What is Elapsed time? | Examples & Calculation

Ratios and Proportions: Definition and Examples

Function Application for the Real World

What is Subtraction in Math? - Definition, Methods & Examples