South Korea is a major East Asian nation. In this lesson, we'll be talking about ethnic groups of South Korea and see what they reflect about the nation's history. Updated: 11/06/2019
Create an account

If I asked you to find the Republic of Korea, where would you look? If you answered East Asia, you're correct. Congratulations! Specifically, you'd be looking at the southern half of the Korean Peninsula. As a result of decolonization efforts after WWII and the conclusion of the often-missed destructive Korean War of 1950 to 1953, the Korean Peninsula was actually divided into two nations, North Korea and South Korea. So who are the South Korean people? To see that, we're going to have to stop talking purely about maps and look a little more closely. 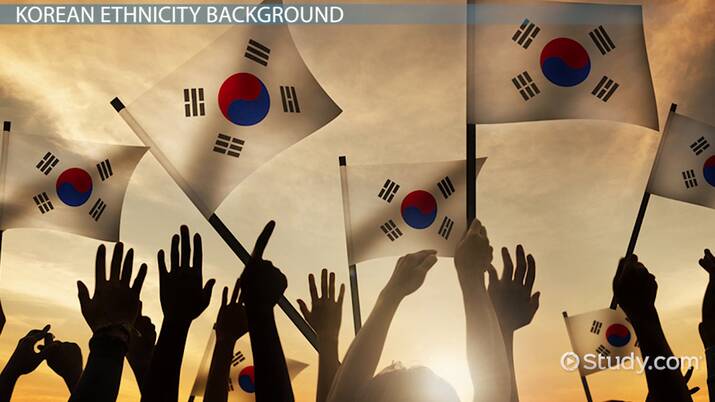 Coming up next: Ethnic Groups in the Philippines

In terms of ethnicity, Korea is one of the most ethnically homogenous nations in the world. That means that almost everybody belongs to the same ethnic category. Over 99% of South Koreans identify as ethnically Korean. The largest group of ethnic minorities in South Korea, the Chinese, only number around 20,000 people. So Korea really is home to the Koreans.

Any idea what language they speak? Koreans speak the Korean language, so no surprises there. However, this language itself is somewhat of a mystery to many scholars. Some claim that it shares enough similarities with the Mongolian and Turkish languages to belong to the Altaic language family. Other scholars claim that Korean is a rare example of a language isolate, which is a language that is not related to any other spoken language and seems to have developed in isolation from other traditions (like the Hungarian language in Europe, which is completely isolated from the surrounding Slavic, Germanic, and Romance languages of the continent). This is important, since understanding the history of a language can tell us a lot about a group of people and their ancestral history.

So, if the language family is ambiguous, what exactly is the Korean ethnicity? And why does Korea have such little diversity? The answer to both of these are products of the geography of Korea. Considering that Korea is a major nation of East Asia near China, any guesses as to who the closest ethic relatives are of the Koreans? Sorry, but it's not the Chinese. It's actually people of Siberian and Mongolian descent. You see, Korea was historically a rather isolated nation, or set of kingdoms, depending on the century. While they did trade with China, these ethnic populations developed in isolation from each other.

We can see this reflected in ancient artifacts from each nation. Ancient Chinese artistic traditions are very distinct, so when they show up in Korean art it's pretty obvious. The earliest Korean art has no resemblance to Chinese traditions, instead reflecting the bronze working of Siberian Mongols. Even after China started influencing Korea's culture, the ethnic groups remained distinct, and to this day, the Chinese have contributed only minimally to the Korean gene pool. So we can definitely say that South Korea is the home of the Koreans. Not South Koreans, just Koreans.

The Republic of Korea, often referred to as South Korea is a nation in East Asia on the southern half of the Korean Peninsula. Historically, this peninsula developed largely in isolation, which is reflected in the ethnic population of South Korea today. South Korea's largest and primary ethnic group is Korean, at about 99%, making them one of the most homogenous nations in the world. This ethnicity itself is most closely related to Siberian and Mongolian groups, and actually shares little genetically with China.

The Korean language has been said to belong to the Altaic language family, also containing Mongolian and Turkish, although many scholars believe it to be a language isolate, meaning it's unrelated to any other languages. Whatever their exact ethnic history, the Korean people are still the only sizable ethnic group of South Korea to this day.

Ethnic Groups in the Philippines