One of the first crossroads of the world, Southeast Asia may have been originally peopled by groups from China, but much of what would influence its numerous cultures came from India.
Create an account

Strategically situated across both land and sea routes between the Indic world and the Chinese world, Southeast Asia's geography could not be more ill-suited to act as such a crossroads. From the foothills of the Himalayas in northern Burma to the hilly spine of the Malay Peninsula, so much of the geography of this region seems to work against its destiny as a trading center. And yet, while there was no easy land route through Southeast Asia, the land gave birth to numerous civilizations, in no small part due to a large number of fertile river valleys. Rivers, like the Mekong and the Irrawaddy, allowed for substantial societies to develop, even if the intervening terrain kept any single group from establishing dominance.

However, where the land failed, the sea created the Strait of Meluka, which is still one of the most heavily transited bodies of water in the world. The numerous islands of the region, today the countries of Indonesia, Malaysia, and the Philippines, helped to establish a maritime tradition based on trade that heavily shaped the development of these regions throughout history. 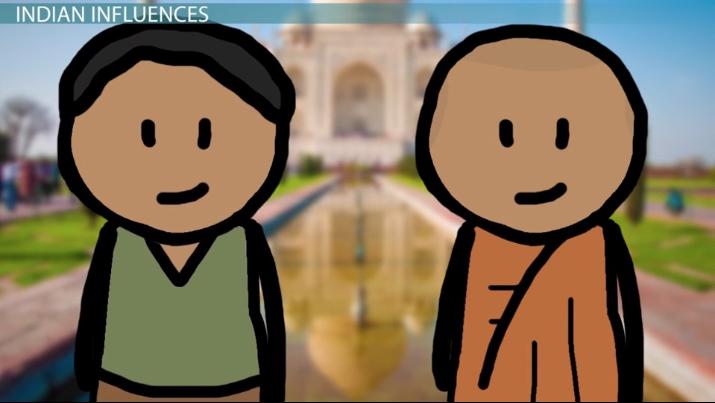 Coming up next: Islamic Expansion & Influence in India

Anthropologists agree that practically all of the people who would eventually inhabit Southeast Asia came originally from China. This has been established through genetic testing, as well as archaeology and linguistic analysis of Burmese, Vietnamese, and Thai, all distant cousins of modern Chinese. However, with the exception of Vietnam, China had shockingly little influence on the development of institutions within Southeast Asia itself, at least in the early years.

While Chinese influence has been substantial in later years, especially given the large number of Chinese people who moved to Malaysia and Singapore for commercial activities, core Chinese traits, such as Confucianism, Chinese writing, and Chinese political control, failed to ever gain a real foothold in the region. The one exception, Vietnam, was often a protectorate of China because it was the only region of Southeast Asia that the Chinese could politically dominate at any period.

Instead, almost all of the cultural aspects introduced from outside Southeast Asia came from India. Even today, the region is strongly associated with Buddhism. The faith has a strong majority in every country in mainland Southeast Asia, and a significant minority in the Muslim-dominated islands of Malaysia and Indonesia.

In fact, even those islands received their version of Islam from Indian merchants. Ashoka, the one true great Buddhist political leader in Indian history, made a point of exporting as much of his religion as possible to Southeast Asia. Accordingly, it was considered an indicator of social status to be affiliated with Buddhism. Even today, most men spend time as a Buddhist monk before entering their professions.

Additionally, other cultural aspects tend to point heavily to an Indian influence. Cuisine more strongly resembles food from India than from China, and indigenous writing systems are all heavily influenced by Indian alphabets. This was accomplished through strong trade links to India, which were established because Southeast Asia cultivated many of the spices later introduced to India, and, via India, to the rest of the world.

Given the difficult terrain of Southeast Asia, it is little surprise that the region developed first into a number of city-states that would later consolidate power over nearby weaker governments. There were two major approaches to development, both dependent on local geography. On the mainland, small agricultural sites were eventually consolidated into larger states, such as Vietnam, Thailand, and Burma. These new states were quick to use existing respect for Buddhism to further establish their rule, such as the rulers of Angkor, who built Buddhist sites alongside Hindu sites, another religion that came from India. Most notable of these was the temple complex of Angkor Wat.

Societies on the island developed through a different approach. Instead of emphasizing agriculture, the residents of modern Malaysia and Indonesia were originally scattered merchant communities that capitalized on their location between India and China. The one exception to this was found in Java, today part of modern Indonesia, where the rich volcanic sands may have been one of the first places that humanity began to farm. Such a combination of rich soils and abundant trade routes worked out well for the Javanese, who became very wealthy as a result. Marco Polo would remark that it was the most wealthy country he had seen in his travels, and its leaders would dominate inter-island relations for years to come.

This lesson focused on the geographical and cultural development of Southeast Asia. The mountainous terrain, giving way to a number of fertile river valleys, explains the establishment of a number of smaller states that were never able to politically dominate their neighbors. While China may have provided the people and some of the language, with the exception of Vietnam, much of Southeast Asian culture comes from India, especially language, cuisine, and religion. The first states to develop here were often agricultural in nature, with the exception of the first states in Indonesia and Malaysia, which were originally trading posts.

Utilize this lesson's content if your goals are to subsequently:

The Rise of the Early Japanese State

Southeast Asia During the Spice Trade

The Mongol Empire & Dynasty in China

The History of Communism in China