From Sea to Sea

Have you ever wondered why so many countries throughout North and South America speak Spanish? It's not because they all chose to! Instead, it's because the Spanish empire began controlling much of North and South America by colonization, which means taking over new lands in the name of a faraway land, over 500 years ago. After the first voyages of Christopher Columbus, Spain claimed almost the entire region and quickly began to build cities and control the area. The result is the Hispanic culture, meaning based on Spanish language, religion, and traditions, that spreads from Mexico to Panama. 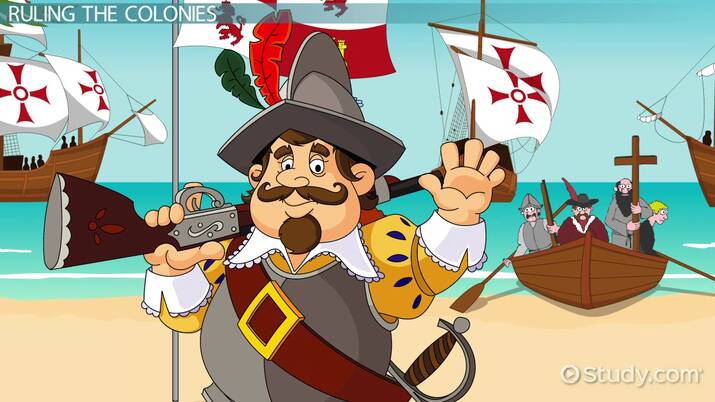 When Columbus returned to Spain from the New World in 1492, he thought he had landed in India because he had no idea North America existed. Quickly, however, the Spanish realized that this was an entirely new area, and not a part of Asia; they began to explore and conquer the region, creating colonies as they went from the Caribbean isles to the mainland of North America. The first major conquest was Hernan Cortes' takeover of the Aztec Empire in modern-day Mexico City. By taking over the Aztecs, as well as the Inca in South America, the Spanish became extremely powerful and wealthy.

For about the first 100 years, Spain ran the show in North America by themselves because of their powerful military and riches. However, just like you always want to play a game that your friend gets, other European powers tried to muscle in and take over parts of North America. At first, they only sent pirates to steal the ships full of treasure that Spain sent back across the Atlantic. But later, the French, English, and Dutch all wanted land for themselves. The first fighting took place in Florida between Spain and France, at a place called San Agustin, or St. Augustine, the oldest European-built city in the United States that's still inhabited.

The more Spain explored North America, the more they realized it would be challenging to control. Spain's takeover of North America depended on creating cities with three separate parts:

Priests working at the mission would try to convert Native Americans to Christianity, sometimes successfully and sometimes not. The fort would fight against enemies and protect the people. Eventually, Spain realized it was easier to give away land to people who would protect it for them, creating a system called mercedes, or land grants, to settle areas like modern-day New Mexico.

While Spain grew powerful from its colonies, it could not hold on to them forever. Some of them were traded off, such as Florida, while other countries conquered parts of the colonies. Some colonies, like Mexico, fought back against Spain and became their own nations. By the end of the Spanish-American War in 1898, Spain had lost all of its colonies in North America.

For several hundred years, Spain controlled much of North and South America, having colonized, or taking over new lands in the name of a faraway land, parts of the region. This created the Hispanic culture, based on Spanish language, religion, and traditions. Important aspects of the Spanish colonies included the mission (used for religious conversion and culture), forts, and the towns. Spain lost its last North American colony in 1898.

The Pueblo Revolt of 1680: Lesson for Kids

Immigration Patterns in the Late 1800s