The culture of Spain is rich and colorful with unique types of food and drink, music and dance, and fashion trends. Explore the customs, discover the cuisine, and learn facts and trivia about Spanish culture. Updated: 11/23/2021
Create an account

Spanish culture is rich and complex. With a strong Roman heritage, Spain has been influenced by wars and invasions, as well as its climate and geography. It is known for literature, architecture, music, art, and, of course, food! 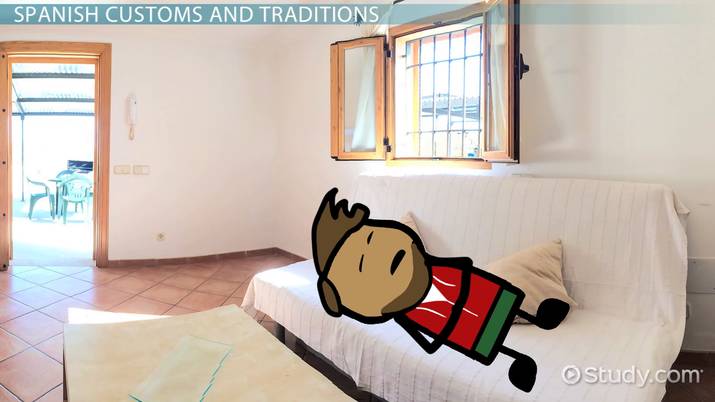 Try it now
Back
Coming up next: Spanish-Speaking Countries & Capitals

When you think of Spain, you can't help but think of la siesta! A siesta is traditionally a short nap in the afternoon, which originated from taking a break away from working in the hot midday sun. Rarely do people actually nap anymore, but many smaller towns in Spain still close their businesses for a long afternoon break. Because lunch is the main meal of the day, Spaniards typically rest and socialize before returning to finish their day of work.

Images of Spain also wouldn't be complete without bullfighting! In Spain, it's called corrida de toros, literally translated 'running of the bulls.' The most famous is held in Pamplona, where the bulls run down the streets of the city and are then herded into a bullring. There, the Matador, the top bullfighter, waves a big red cloth called a muleta to attract the bull. The bull runs and charges the muleta while the Matador hides the espada, or killing sword, underneath. After the Matador has proven his courage, he kills the bull with the espada!

The flamenco is a popular genre of art which includes music and dance. Originated from the Andalusia region of the Romani gypsies, it's very powerful and full of emotion. In the highly technical baile, or dance, the couple lock eyes and circle each other passionately while they stomp, clap, and snap to the rhythm of the music. The music mainly comes from guitars, but also includes a dry stick, called a palo seco, which is beat on the floor to keep time.

There are many things about Spain that make it a unique place. Did you know that the Spanish national anthem, Marcha Real, or the 'Royal March,' doesn't have any words? Over the years, there have been lyrics written, but officially it's music only.

Perhaps you want to visit the center of the country. Located in the capital city of Madrid, the Puerta del Sol plaza, also called the 'Gate of the Sun' is the physical center of Spain. It is literally listed as km 0 of the radial network of Spanish roads.

Have you heard of Don Quixote? It is a famous book written in 1605 by Spanish author Miguel Cervantes. Although a fictional tale about a knight, Don Quixote and his squire, Sancho Panza are considered national heroes in Spain. There are many statues made to celebrate them.

There are so many delicious Spanish foods. Let's eat our way through Spain in a day!

A delicious breakfast might include churros. Churros are a fried-dough pastry, although sometimes they are made from mashed potatoes. Sprinkled with sugar or icing, they can be served as a snack or even for breakfast. Dip them in your favorite hot drink, such as café con leche, which is simply coffee with milk. Yum!

In Spain, lunch is typically a heavier meal, such as paella. From Valencia, paella is a rice dish which has meat or seafood mixed in. You'll recognize paella's bright yellow color which comes from the flavor saffron, making it absolutely delicious! On a hot day, you will find Spaniards drinking sangria in the afternoon. This mix of red wine, fruit, and spices is often served in a large jug to share with everyone at the table. It is usually mixed several hours beforehand so that all the flavors meld together. Serve it up cold in a tall glass with a slice of orange. It looks as good as it tastes!

Dinner is normally lighter, made up of tapas, or small snacks. Local tapas bars serve dinner, often dishes like tortilla española. You might think tortillas are the corn flour tortillas you like to eat, but in Spain, they are something different. Tortilla española are delicious omelets made with potatoes served hot or cold for any meal. You could also try empanadas, or filled savory pastries. Fried or baked, they are normally filled with meat, sardines, or tuna mixed with a tomato-based sauce. Another popular tapas item is gazpacho, which is a cold soup made from the ripest, reddest tomatoes. Blend these together with garlic, olive oil, cucumbers and peppers, and you've got gazpacho.

Apart from the delicious food, there is plenty of culture to experience in Spain! What will be on your to-do list when you visit?

Spain is a culture rich with diversity. If you're planning a holiday, there are some things you should not miss. Visit Puerta del Sol, or the 'Gate of the Sun,' in the center of Madrid, not to mention the center of Spain and also called 'km 0.' You could also drive around looking for statues of the famous fictional characters, Don Quixote and Sancho Panza. If you're not too tired, you could participate in the corrida de toros, or running of the bulls, in Pamplona or at least see a bullfight in which the matador, or bull fighter, waves his muleta, or big red cape, to attract the beast before killing it with his espada, the killing sword. Before the event, you'll probably hear the Spanish national anthem, Marcha Real, but you certainly won't hear anyone singing. If you want that, you'll need to seek out the flamenco arts. This genre of art includes singing, music, and the flamenco, which is a popular genre of art which includes music and dance. When you get hungry, try some paella, which is a rice dish which has meat or seafood mixed in, or tapas, which are small snacks. Enjoy!

Ir Conjugation: Present Tense Chart & Use | How to Conjugate Ir in Spanish

Querer Conjugation: Present & Future Tenses | How to Use Querer in Spanish