This lesson will define spatial ability for you. Then, via numerous day to day as well as professional examples, you'll learn exactly how and where spatial abilities are used. Updated: 11/15/2021
Create an account

What Is Spatial Ability?

What does a radiologist, engineer, baseball player, and a cartographer have in common? They are all people who must have some pretty good spatial abilities. Spatial ability can be seen as a form of intelligence where a person demonstrates the capacity to mentally generate, transform, and rotate a visual image and thus understand and recall spatial relationships between real and imagined objects.

That might have sounded a bit complicated as far as definitions go, so in this lesson, we're going to look at numerous examples of spatial abilities. 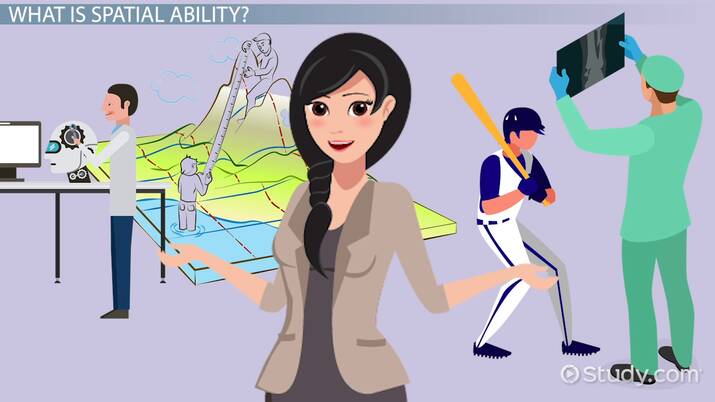 Try it now
Back
Coming up next: Emotions in Psychology: Definition, Biological Components & Survival

Jim is using his spatial abilities today to mail a package to his mom. See, he has a relatively small box and a lot of weird-shaped objects he has to put into that box. So when he's trying to pack the box, he first imagines in his mind which objects will fit where in the box and, thus, how they can be best arranged with respect to one another in such a confined space.

Annie has really long and beautiful hair. But that hair takes a lot of effort to maintain. She spends about 10-15 minutes every morning brushing it in front of the mirror. She relies on spatial ability to understand the mirror image and how to brush her hair while looking into the mirror.

Then there's little Jack. Little Jack is starting fourth grade today. It's the same school as the one he went to during third grade, but it's been a long summer break. So as Jack rides on the bus to school, he recalls the layout of the school in his head to figure out where his first class is going to be and how best to get there.

Morgan is driving to work today. Morgan knows that if he doesn't watch the road and surrounding cars and objects carefully, he might hit one of them, ruining his day. So Morgan uses his spatial ability to carefully drive around obstacles, between cars, and stay on the road in general.

Alexa is traveling through Patagonia. Problem is, there's no signal for her to use GPS. Alexa has to rely on a good old map. She looks at the map, a topographical one at that, and tries to figure out where she is on the map and where she needs to go and how to get there in the surrounding area. She relies heavily on her spatial ability to relate the map to the real world and vice versa to find her way around.

Then there's Dr. Smith. Dr. Smith is a physician. Part of his job is to review x-rays for any signs of a problem. But Dr. Smith must really know his anatomy really well in order to figure out where the problem is exactly in the body and how it may affect the person.

For example, if he sees an x-ray with a broken bone, he needs to recall in his mind the spatial relationship between the bone, surrounding tissue, nerves, and blood vessels as well as the fragment of bone in order to deduce how dangerous that fracture might be to the patient.

And there's also astrophysicist Mary. Mary imagines the solar system and universe as well as the galaxies throughout the universe and how they are spaced with respect to one another every day. She must be able to manipulate the universe inside her own head to do her job.

Let's not forget about Rick, an engineer. Rick designs some of the latest aircrafts. He needs some really good spatial abilities in order to imagine, understand, build, and troubleshoot various moving parts within the entire aircraft.

And how about Nancy? She's an architect who needs to imagine and then draw an entire building and how its various parts will relate to one another and the surrounding environment.

All right, let's take a moment or two to review. So whether it's day-to-day stuff or professional concerns, our spatial ability is really important to us and we often don't even think about it.

Spatial ability refers to the capacity to mentally generate, transform, and rotate a visual image and thus understand and recall spatial relationships between objects. This can be seen in examples like:

CGI in Math Strategies & Benefits | Impact of CGI in Math

CGI in Math Strategies & Benefits | Impact of CGI in Math