Patricia has a Ph.D. in Progress, History and Culture as well as a master's degree in Holocaust and genocide studies. She has taught heritage of the western world and U.S. history.

Mass hysteria and the fear of witches were the catalyst for the Salem Witch Trials. Explore the definition of the trials with an overview of spectral evidence. Updated: 10/18/2021
Create an account

Introduction to the Witch Trials

The most notorious instance of witchcraft hysteria in the United States occurred in Salem, Massachusetts, in 1692. During the course of the trials, 19 men and women were hanged, one man was pressed to death by heavy stones, and 165 people were accused. The frenzy began in the home of Reverend Samuel Parris. When his daughter Elizabeth, who was nine years old, and his niece Abigail Williams, who was 11 years old, began to act strangely, Parris summoned a local doctor to examine them.

Unable to find a medical reason for the symptoms, Dr. William Griggs diagnosed their illness as the result of witchcraft. Soon after, other young girls began to experience similar problems. The population of Salem village began to panic. Who was causing this illness? How could they stop the witch or witches responsible? When prayer and fasting failed to cure the girls, Reverend Parris filed charges against three suspected witches on February 29, 1692.

Initially, three women (Tituba, a Caribbean slave who lived in the Parris household; Sarah Good, a homeless woman; and Sarah Osborne, a poor, elderly woman) were accused of tormenting the girls. By May 27, 1692, a special court was established to try the accused witches. 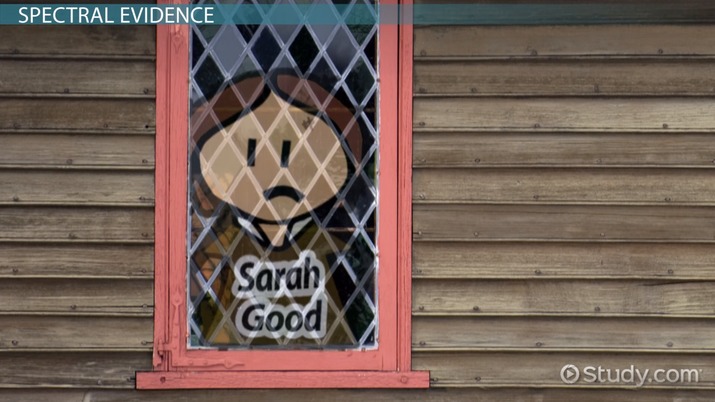 Coming up next: The Lost Colony of Roanoke: Mystery, Theories & History

The evidence used in these cases included confessions given under torture, supposed eyewitness testimony, and physical inspections of the accused. Perhaps most disturbing was the admission of spectral evidence, or evidence based on the visions or dreams of the accusers.

The girls insisted that they saw the accused witch's specter, or spirit or ghostly apparition, tormenting them or others. Sometimes the specter appeared as an animal, called a witch's familiar. Importantly, the physical body of a witch could appear in one place while his or her specter was in another.

In a deposition statement dated April 11, 1692, Mary Walcott, one of the girls responsible for the accusations, testified that the apparition of Elizabeth Proctor ''...most grievously afflicted me by biting, pinching, and almost choking me...'' This evidence was considered valid based on the Puritan religious belief that the devil and his helpers were real and could affect the world in very serious ways.

In order to understand the witch trials of Salem, one must put aside all notions of modern justice and evidence-based verdicts. In Salem, Puritan religious values permeated every aspect of society. While the belief in witches and evil spirits may seem ridiculous today, the people of 17th century Salem did not question the existence of these things.

The decision to admit spectral evidence was made by Chief Justice William Stoughton. The statements of the accusing girls were taken as truth and required little other proof. For instance, Ann Putnam accused Rebecca Nurse and Martha Corey of sending their specters to torment her. She testified, ''...they did both torture me a great many times this day with such tortures as not tongue can express, because I would not yield to their hellish temptations...''

Often, the girls engaged in echo-mania, the imitation of the accused witch's movements. The girls fell into convulsive fits if the accused even looked at them in the courtroom. Imagine attempting to offer a defense against such accusations!

The number of accused became so high that in May of 1692, Governor William Phips created a special Court of Oyer and Terminer, or ''hear and determine''. Reverend Increase Mather spoke out against the admission of spectral evidence in court proceedings in his writing Cases of Conscience Concerning Evil Spirits Personating Men, Witchcrafts, infallible Proofs of Guilt in such as are accused with that Crime. His reasoning for this was, ''It were better that ten suspected witches should escape, than that one innocent person should be condemned.''

The court continued to admit spectral evidence until it was finally shut down by Governor Phips in October 1692. He pardoned all those convicted or under investigation by the court. Shortly after the hysteria ended, court officials and several of the accusing girls announced that they had mistakenly denounced people as witches.

In 1696, the Massachusetts legislature called for a day of prayer and fasting in repentance for the mistakes of the Salem trials. Reverend John Hale, a trial participant, even stated that the court had convicted people based on insufficient evidence.

The Salem witch trials marked a period of superstition when evidence was based more on religious notions than on verifiable facts. Beginning in 1692, accusations against supposed witches sparked a society-wide panic. Who would be accused next? How many witches were in Salem village?

The high number of accused witches led to the creation of a special Court of Oyer and Terminer. This court used confessions given under torture, physical inspections, and spectral evidence in order to convict accused witches. Importantly, spectral evidence was testimony that the accuser had witnessed the apparition or specter of the accused tormenting a victim. This specter was only evident to the person making the accusations. While this testimony was not verifiable, it was accepted because of the Puritan belief that the devil was real and could influence the world.

Eventually, the girls lost their credibility and the hysteria subsided. In the aftermath of the trials, many of the girls who accused people of witchcraft and the officials involved in the trials regretted their actions, believing they had sent innocent people to the gallows.

Who spoke out against the use of spectral evidence in the Salem trials?

Judge Danforth in The Crucible

Puritans in America: Beliefs, History & Leaders | Who were the Puritans?

Mary Warren in The Crucible

Quotes from Rebecca Nurse in The Crucible

Allegory in The Crucible

The Declaration of Independence: Summary & Analysis