Darlene is a recent widow in her 70s. She misses her husband and wonders how much time she has left. She's also wondering what all the years she's lived so far amount to and how she can make sure that her remaining time is used well.

Darlene is in late adulthood, or the time of life after age 65. During that time, many people find that, like Darlene, they wonder about their life and what lies in store for them. Let's take a look at religion, spirituality and aesthetics in late adulthood, and the impact they have on late life. 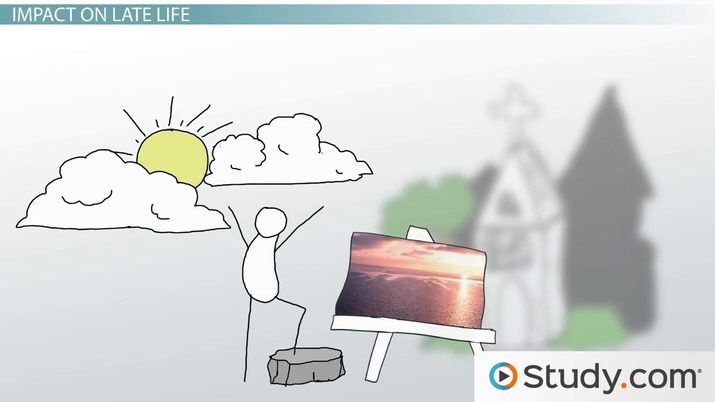 Try it now
Back
Coming up next: Social Context of Aging: Communities, Neighborhoods, and Housing

Darlene is wondering about the meaning of life and what happens after death. Is her husband in heaven? Or is he just a body in the ground? She's also wondering how to make sure that her remaining time on Earth is used well.

Darlene is seeking, and her search involves spirituality, which is the search for the sacred. Whether Darlene believes that divinity is God or Allah or just that it is all around us and that there's no great being looking down on us, her spirituality is just about the search.

Darlene, for example, finds that one of the things she loves about her church is that it offers her a supportive community. She finds comfort in the routine of the Sunday morning service and enjoys participating in activities that allow her to socialize with other members.

Religion and spirituality are a big part of Darlene's life. But so are aesthetics, which is spirituality rooted in nature. Aesthetics can be present with or without religion, but it always involves spirituality. A good example of aesthetics is the way that Darlene can see God in the beauty of a sunset or in the frost on the ground on a cold winter morning.

So, spirituality, religion and aesthetics are all part of Darlene's day-to-day life. But what does that actually mean for her? What impact do spiritual traditions have on late life?

For one thing, Darlene is likely to be healthier and happier. Numerous studies have demonstrated the power of prayer and meditation on health and wellness. Benefits of those include lower blood pressure, sharper thinking skills and lower rates of depression compared with people who do not pray or meditate.

Another benefit of spirituality and religion in later life is that they can help people find meaning during late adulthood. For example, Darlene's church has a program where she can mentor a teenager. Through doing this, Darlene has come to feel better about the legacy that she's leaving. Besides, she enjoys the company of the young woman she's mentoring.

Spiritual traditions can also help people deal with loss and prepare themselves for death. Being part of her church and praying regularly has helped Darlene cope with her husband's death and kept her from being too depressed. Not only that, she's slowly learning not to fear her own death; she sees it as just part of the life cycle and is approaching it with peace.

All of the benefits we've talked about so far are true of spirituality, religion and aesthetics. So, even if a person isn't involved in a church, they can still reap benefits like better health, more meaning and a way to deal with loss. But religion offers a couple of added benefits that spirituality and aesthetics don't offer on their own. Specifically, religious organizations, like Darlene's church, can provide services and social support to older adults.

Darlene, for example, has trouble getting around. But her church has a service where a member comes and picks her up and drives her to her doctor appointments. That really helps Darlene out!

Late adulthood is the time of life after age 65. During this time, many people discover the benefits of spirituality, religion and aesthetics, including a boost in physical and mental health, a way to find meaning in their later years and a support system to help them deal with loss.