Lauren has taught intermediate reading in an English Language Institute, and she has her Master's degree in Linguistics.

In this lesson you will learn about one of the aspects of nature that makes evolution possible: mutation. Specifically, we'll look at the difference between spontaneous and induced mutations.
Create an account

Think about how different reptiles look now than they did during the time of the dinosaurs. This is a result of evolution, or change over time, and it is an ongoing part of nature. There are several different mechanisms that move evolution along and help create the changes we see throughout natural history, but arguably the most influential of these mechanisms is mutation. Mutation happens when the genetics of an organism are altered, which produces a change in how the organism looks or acts.

One famous example of mutation is in fruit flies (Drosophila melanogaster). Fruit flies are periodically born with different eye colors or wing shapes, and it is easy to study them because they have such a short life cycle. Fruit flies have been studied as part of both of the two main types of mutation: spontaneous mutation, which occurs naturally, and induced mutation, which is purposefully set in motion by humans. 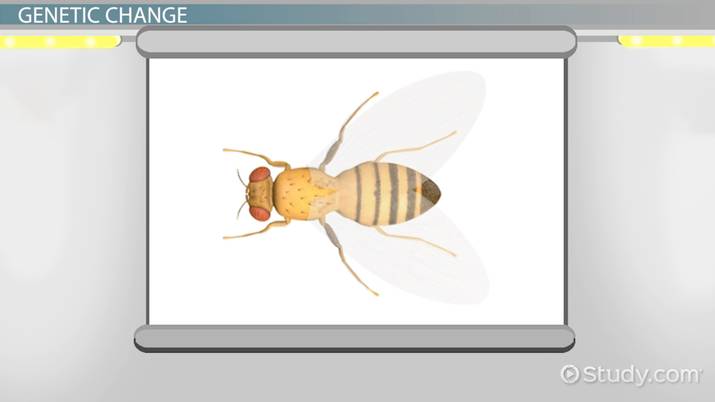 Coming up next: Types of Genetic Recombination in Bacteria

Fruit flies were the subjects of one of the earliest induced mutation experiments because of their short lifespan and ease of observation. H. J. Muller exposed fruit flies to X-rays, and he noted that the rate of mutation increased as the fruit flies were exposed to more X-rays.

One way that evolution proceeds is through mutation, and there are two overarching types of mutations. The first is spontaneous mutation. This type occurs naturally, and it is infrequent and unpredictable. It might be affected by several different naturally occurring mutagenic agents, such as UV rays or heat. Sickle cell anemia is an example of a spontaneous mutation that stuck around to future generations because it is occasionally beneficial. The other type of mutation is induced mutation. These are purposefully started by exposing living tissue to mutagenic agents. Physical agents include X-rays and UV rays, while chemical agents include mustard gas and formaldehyde. Point mutations are most common with induced mutations, especially those done with chemical agents. Point mutations happen when one half of a base DNA pair is changed. Deletion, where part of a chromosome is removed, might also occur. Fruit flies are used to study both types of mutation because they have very short life spans, so the effect of mutation is easily observable across generations.

Thymine Structure & Function| What is Thymine?