The St. Lawrence River is a natural boundary separating Canada from the United States. Discover the St. Lawrence River and learn about the animals and habitats it supports and its value as a water highway and source of hydroelectricity. Updated: 01/03/2022
Create an account

Now can you imagine a bathtub big enough to hold two million gallons of water? 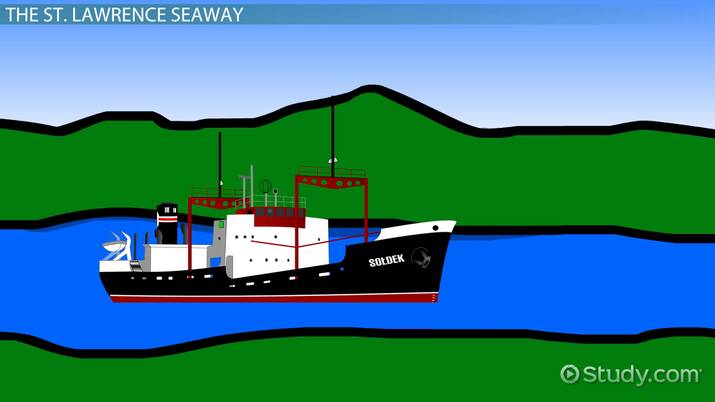 Coming up next: Mississippi River Facts: Lesson for Kids

Starting from Lake Ontario, the St. Lawrence River is almost 750 miles long. If you wanted to drive that distance in a car, you'd have to drive for more than 12 hours straight.

The St. Lawrence River flows close to the border between the United States and Canada. Mostly, Canada is to the north of the river and the US is to the south. But a little bit of Canadian land is also south of the river.

The St. Lawrence River runs through the part of Canada where most Canadians live, going past major cities such as Montreal. So a lot of people want to use it for transportation. In 1954, the US and Canada started working together on the St. Lawrence Seaway. They made the shallow parts of the river deeper so big ships could sail all along the whole river.

At some parts, the St. Lawrence River has waterfalls or really steep downhill flows. To let ships go by these parts of the river safely, the St. Lawrence Seaway includes a lot of locks. Locks are like elevators for boats.

The St. Lawrence River is also used for hydropower. Hydropower means using water to create electricity. Because the river has a really strong current, engineers built special dams that turn the energy from the current into electric power.

The St. Lawrence River runs from the eastern edge of Lake Ontario out to the Gulf of St. Lawrence and the Atlantic Ocean. Built in the 1950s, the St. Lawrence Seaway allows big ships to carry food and other things all along the river. People also use the river for hydropower, making electricity from the river's current.

Canada Provinces & Territories | How Many Provinces are in Canada?