In this lesson, we'll be learning about the factors that help determine alkene stability. We'll go over substitution, orientation, and conjugation, and discuss Zaitsev and Hofmann products. Updated: 11/08/2019
Create an account

Think about how much plastic you use each day. From grocery bags to plastic packaging on our food, plastic is just about everywhere in our lives. If this feels relatable, chances are you've already had quite a bit of experience with alkenes. Alkenes are hydrocarbon chains with at least one double bond. They make an appearance in the production of lots of consumer goods, such as the thick plastic we see in buckets and crates for storage, wire coatings like those on our phone chargers, and the thin plastics we find in shopping bags and packaging. 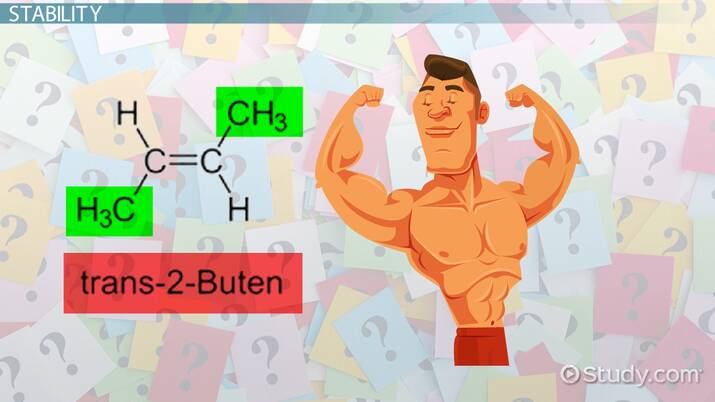 During elimination reactions, more than one alkene product can be made. So, how do we know which product to expect? The most stable product is usually the favored product, with some exceptions. Burt how do scientists know which products are more stable? There are three main things that determine stability of an alkene product: the number of substituents, their orientation, and hyperconjugation. Let's look at each in detail next.

The trans orientation is going to produce a more stable product due to steric hindrance, which is a physical limitation of the substituents. In a cis molecule, the two substituents may repel each other because of molecular interactions. But, in a trans molecule, each substituent has enough space, making it more stable.

The last factor in alkene stability has to do with hyperconjugation. This is a force that occurs between the p or pi orbitals of the carbon atoms in the double bond with sigma orbitals of the carbon atoms in the substituted groups. The overlap of these orbitals helps the atoms share electrons and makes the molecule more stable. This is why alkenes with more substituent groups are more stable than those with fewer. Additional substituents can increase hyperconjugation and thus molecule stability.

Even though the molecules we're discussing are very small, they still have a three-dimensional shape. So, the base must be able to fit in at the site of elimination on the alkene to actually carry out the reaction. If the base is very large and there are additional substituents near the site that would produce the Zaitsev product, it may experience steric hindrance and not be able to form that product, even though it is more stable. In this case, there would be more Hoffman product produced, even though it's less stable than the Zaitsev product. It all depends on the molecule and base in question.

Alkenes are hydrocarbon chains that have at least one carbon-carbon double bond. They are produced by elimination reactions, where a substituent is removed from a hydrocarbon molecule, producing a double bond between adjacent carbon atoms in the process. The type of product created is determined mostly by stability. Alkenes with more substituents are more stable. Substituents arranged in the trans configuration on opposite sides of the double bond are more stable than substituents arranged in the cis configuration on the same side of the double bond. During elimination reactions, the more substituted product is called the Zaitsev product and is more commonly formed. However, due to steric hindrance, sometimes the less substituted product, the Hoffman product, is more commonly formed.

What is a Stereocenter? - Definition, Identification & Examples

The Causes and Significance of Cell Swelling

What is Gout? - Causes, Symptoms & Treatment

What is a Tautomer? - Definition, Mechanism & Example