Criminal trials consist of multiple stages progressing from jury selection, pretrial preparatory motions, opening statements, testimonies and evidence, closing arguments, and the instructions of the jury deliberation. Explore each of the stages involved in a court's reaching of a verdict. Updated: 10/20/2021
Create an account

The criminal trial is when two parties, a prosecutor representing the government and a defense attorney representing the accused, meet in court before a judge or jury in order to present evidence to support their case. During the trial process there are several stages that make up what we call a trial. 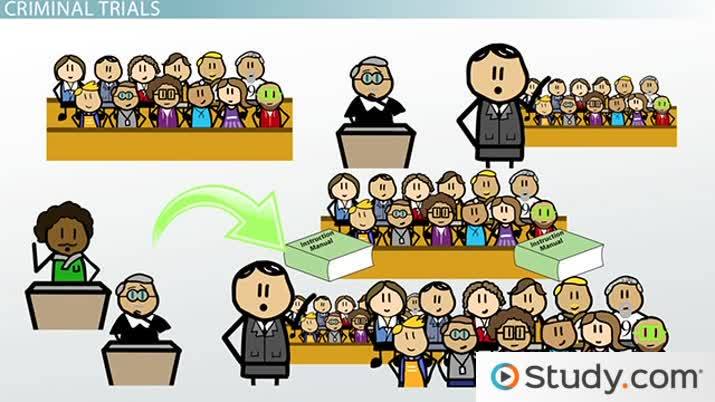 Coming up next: Types of Defense Against a Criminal Charge

Voir dire is the process of jury selection. In order to appear for jury duty, citizens receive a notice in the mail. If they are ordered to appear, they arrive at the courthouse and sign in. Then, if there is a trial that will be beginning that day, they go into the courtroom and take part in the process of voir dire.

During this process, the attorneys for both sides ask the potential jurors different questions regarding the case in order to find out if there is something that would make it inappropriate for them to sit as a juror on that particular case. Once these questions are asked, each party gets a part in selecting and releasing some jurors. It varies by state how many jurors are empaneled on a criminal jury trial. For example, in the State of Ohio, there are 13 jurors empaneled on a jury - 12 will actually serve and one is an alternate in case of an emergency with one of the other 12 and that juror is unable to continue serving.

Testimony is a witness' account of the incident at issue given while under oath. Before a witness testifies, he or she takes an oath to tell the truth. Then, the prosecutor has a chance to ask the witnesses questions, also known as direct examination. Then, the defense has a chance to ask the witnesses questions under cross examination. Once the prosecutor has presented all of its witnesses and all of the exhibits and evidence that it intends to present, the prosecutor rests, or officially ends its case. Then, the whole process of testimony and evidence starts again with the defense, including direct examination, cross examination and resting.

Jury deliberation is the period during which the jury discusses its potential verdict in seclusion. To begin, the jury selects a foreperson that will be in charge of keeping the jury on task during deliberations. When the jury has reached a verdict, then it is the foreperson that contacts the court and hands the verdict over to the court. The amount of votes necessary for a guilty verdict varies from state to state, but most states require a unanimous verdict in order to convict a defendant. Once the court is notified that a verdict has been reached, then the verdict is read in open court and the trial is completed.

The criminal trial is when two parties, the prosecutor representing the government and the defense attorney representing the accused, meet in court before a judge or jury in order to present evidence to support their case. During the trial process there are several stages that make up what we call a trial:

When you finish the video, the following should be easier:

Stages of the Criminal Trial: From Voir Dire to Verdict
Related Study Materials

Police Procedure for Arrest Process & Steps | What Happens After Arrest?

Closing Statements Overview & Examples | How to Write a Closing Argument