Tara has taught Psychology and has a master's degree in evolutionary psychology.

Stanley Schachter was an American social psychologist primarily know for his research on emotions. Explore Schachter's cognitive appraisal theory and the experiment that scientifically demonstrated it, and see how his studies contributed to the field of psychology. Updated: 09/02/2021
Create an account

Stanley Schachter was an American psychologist who was born in 1922 in Queens, New York, and died in 1997. During his lifetime, he dabbled in many areas of psychology despite being considered primarily a social psychologist. Schachter did his undergraduate education at Yale University and earned his Ph.D. at the University of Michigan.

He was one of the rare social psychologists to be elected to the National Academy of Sciences and was considered by some to be the father of health psychology, which is a field that applies psychological principles to healing physical illness and medical problems. Schachter conducted research on many topics including:

However, his most well-known research is on emotions, something we'll be looking at now. 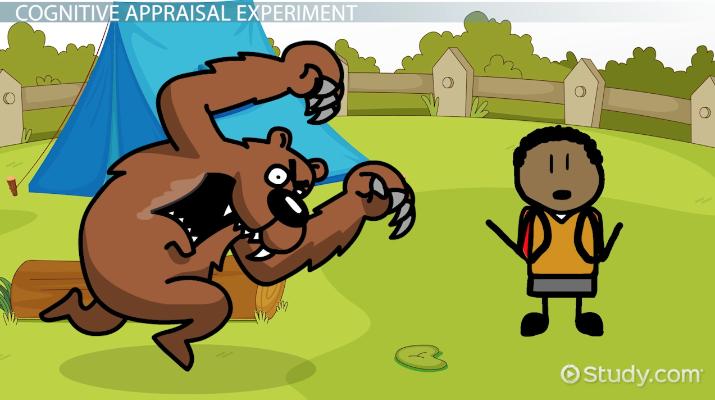 Perhaps the most well-known of Schachter's experiments is the one related to his cognitive appraisal theory of emotion, which he developed with Jerome Singer. The theory is known as the two factor theory. The cognitive appraisal theory states that in order for us to experience an emotion, we must not only feel physiological arousal, but we must also cognitively appraise, or mentally interpret, that physiological arousal as some emotion. To use a simple example, the same physiological arousal that you feel can either be labeled as fear in the presence of a snarling bear or lust in the presence of an attractive partner. The physiological response is the same, but the context is what determines which emotion it is labeled as.

To demonstrate this scientifically, Schachter and Singer carried out an experiment in which male college students were injected with a dose of adrenaline and were told it was a new vitamin they were testing. After the injection, the participant was told to sit in a waiting room with another 'participant' who was actually an accomplice of Schachter and Singer. The accomplice was instructed to act either happy and playful or irritated and angry.

As further evidence of cognitive appraisal theory, a third group of participants was given the injection, and instead of being told it was a new vitamin, they were told the truth - that it was adrenaline which would cause physiological arousal. This group of participants was also exposed to the accomplice in either condition, although they did not report being influenced by the accomplice's behavior as they assumed their arousal was due to the injection.

Stanley Schachter was a very influential American psychologist who studied many topics within social psychology and was even considered the father of health psychology. His topics of study included social influences and peer pressure, birth order effects on intelligence, the psychology of obesity, and nicotine addiction.

His most famous research involved the cognitive appraisal theory of emotions, on which he worked with Jerome Singer. This experiment on emotions involved male participants deciding whether they felt happy or angry after an injection of adrenaline as influenced by the behavior of an accomplice of Schachter and Singer. Those who witnessed the accomplice acting happy reported feeling happy, while those who witnessed the accomplice acting angry reported feeling angry.

Two-Factor Theory of Emotions: Definition and Relation to the Misattribution of Arousal