Starfish are colorful echinoderms with five arms found in marine habitats, but they are not actually fish. Explore the types, characteristics, and anatomy of common starfish. Updated: 11/27/2021
Create an account

The Stars of the Ocean

If you've ever had the chance to peer into a tide pool, you've most likely caught a glimpse of a spectacular array of marine life. Tide pools are like nature's fish bowls, often full of crusty barnacles, billowy sea anemones, and a five-armed favorite: the starfish. Known as a sea star in the scientific world, the starfish is not really a fish at all. Closely related to the sea urchin and sand dollar, a starfish belongs to the phylum Echinoderm and the class Asteroidea. In this lesson, learn more about the unique starfish and gain an understanding of its life in the ocean. 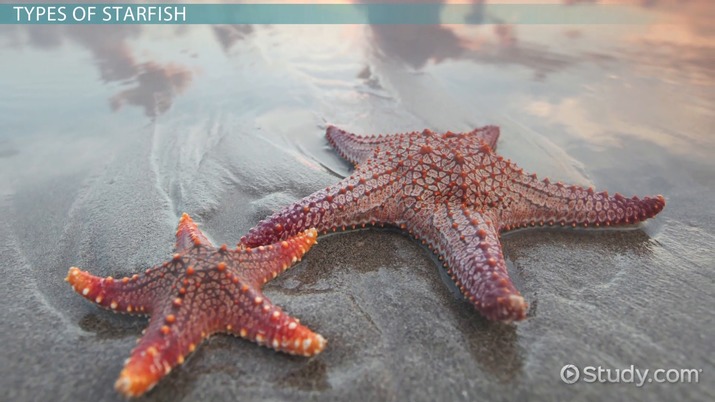 Coming up next: What is Genetic Engineering? - Definition and Examples

There are around 2,000 different species of starfish found in the oceans, and we will take a look at a few examples. Although most species have five arms, some may have ten, twenty, or even up to forty arms. The common starfish represents the typical species, with five arms and often found in an orange color. Common sunstars resemble more a sun than a star, with a large central disc and many arms radiating outward.

The sand star bears resemblance to its cousin, the sand dollar. This starfish lacks suction cups on its tube feet, and spends its time buried under the sand. The largest species is the sunflower sea star, which has 16-24 arms and can have an arm span of up to three feet. One of the most unique is the crown-of-thorns sea star. This is a venomous species that can give quite a sting. It feeds on coral reefs and when too prolific, can devastate these marine environments.

Starfish exhibit radial symmetry, meaning that their arms are arranged evenly in a circle around a central disc - like spokes on a bike wheel. Although starfish don't have eyes or even a brain for that matter, they do have one sensory tentacle at the end of each arm. This tentacle is sensitive to chemical and physical changes, and has a photosensitive spot that helps them detect movement.

If you've ever had the chance to touch a starfish, you know that it has a tough, spiny outer covering. This layer contains calcium carbonate, which gives them a leathery feel. Sometimes this layer is also covered with spikes, giving starfish extra protection from predators that may not want to chew their way through that unpalatable exterior. Another very important feature of this layer is the presence of specialized gills, which make gas exchange possible for the starfish.

On the underside of a starfish we find hundreds of tiny suction cup-like structures called tube feet. These tiny tube feet allow starfish to cling to rocks as well as move along the ocean floor, hunting and scavenging.

Starfish do not have blood circulating through their bodies. Instead, they have a water vascular system that circulates sea water, and thus nutrients, throughout their bodies. There is a central ring-shaped canal in the center disc of the starfish, with radial canals that branch out and run down each arm. From each radial canal, there is a water bulb called an ampulla that attaches to each tube foot. The ampulla is instrumental in the movement of the tube feet.

Also located in the central disc of the starfish is a stomach attached to a small external mouth. There are digestive glands that also run from the stomach down each arm. When a starfish hunts its prey, it is able to digest nutrients and then store them in these digestive glands.

Starfish are only found in marine environments, and often in shallow waters around rocky shorelines. They come in an astounding variety of colors. When spotted hanging out in a rocky tide pool, it may be assumed that a starfish is simply a passive bystander. However, this creature is a carnivorous hunter, adept at prying open and consuming the contents of many a bivalve.

Targeting unsuspecting bivalves such as mussels and oysters, starfish suction to their shells and pry them open. What happens next clearly sets these organisms apart. The stomach of the starfish actually exits its body through its mouth. It enters the opening of the bivalve, digesting and devouring the food externally before returning back into the starfish

Another highly unique feature of starfish is their ability to regenerate. Most members of the animal kingdom would be in very tough shape if they were to lose an arm. However, upon losing an arm, a starfish has the miraculous ability to grow a new one. But it doesn't end there. If the arm that is cut off remains in the ocean, an entire new starfish can grow just from that one arm. This amazing discovery has frustrated oyster fishermen, as they have attempted to destroy starfish by cutting them up only to grow massive new populations.

Starfish are colorful echinoderms that live only in marine habitats. The common species have five arms, although some have more, such as the sunflower sea star. They have calcified exteriors which are often covered with spines. Starfish cannot swim, but get around using their tube feet. This helps them to hunt bivalves such as oysters. Internally, starfish have a water vascular system. A unique feature of starfish is their ability to regenerate.

What Do Starfish Eat? - Lesson for Kids