States are sovereign territories with individual governments that hold centralized power. Learn more about the definition of a state, how states developed and grew in size over time, and explore the relationship between the state and federal governments. Updated: 10/27/2021
Create an account

For those of us living in the U.S., the term 'state' is a very familiar one. After all, it's part of our name. We live in the United States of America. However, there is a larger meaning behind the word 'state' that goes way beyond the idea of Pennsylvania, California, or Kentucky. In today's lesson, we're going to explore this a bit deeper as we discuss the broader political concept of the term 'state.'

First of all, when studying the concept of state, it doesn't take long to figure out that there are some varying definitions. For this reason, we're going to stay rather general using the most accepted definition, which defines a state as an autonomous political unit, including many communities within its territories over which it has legitimate centralized power. In short, a state is a sovereign entity. It holds supreme rule over its territory.

When we say legitimate power, we simply mean power coming from a formalized position or office. It's not a street thug who's in charge simply because he can beat everybody else up. On the contrary, legitimate power is power that has been granted through institutions, things like voting, bureaucracy, and sometimes even tradition, as seen in bloodline monarchies. Yes, the burly street thug may have lots of guys listening to him, but it's pretty safe to say these lackeys never stepped into a voting booth and pulled the lever for his name.

With this idea of legitimate power in mind, it's important to note that states come in all sizes. They can be as large as the ancient Roman Empire that ruled over much of the known world of its day, or as small or smaller than the independent African nation of Gambia. 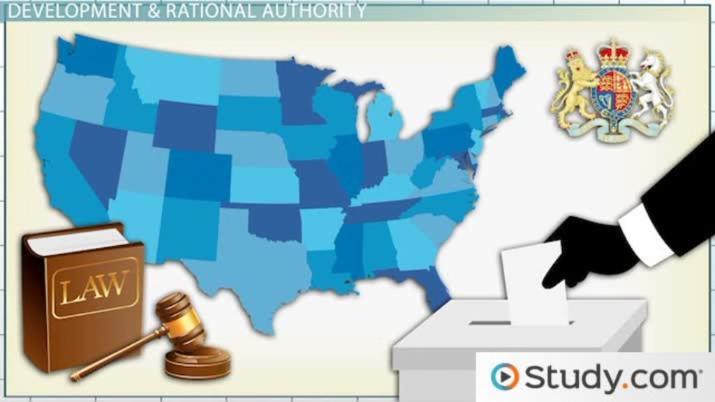 Coming up next: Shapes of States: Compact, Prorupted, Perforated & More

Focusing more on power than size, the legitimate centralized power of a state has the recognized power to do things like collect taxes, make laws, enforce laws, and even draft citizens for war. Speaking of wars and law enforcement, this brings us to one of the main characteristics of a state: a state holds legitimate power to use legitimate force to maintain order.

Going back to our street thug, he definitely wields power. However, his power doesn't come in the form of an institutionalized, well thought out and centralized system. In other words, he's not holding court every week or handing out citations. On the other hand, when a state trooper pulls me over for speeding, you better believe the ticket he hands to me holds legitimacy. If I choose not to pay it, I will find myself eventually going through an institutionalized court system.

Going beyond the ability to hand out speeding tickets, a state holds centralized power through things like a police force and a structured standing army. Also, within a state, the centralized authority holds a monopoly on power. In other words, the state has the last say on what goes on within the state.

With this in mind, it might be difficult for some of us to understand why, let's say, the state of Pennsylvania is considered a state when the overarching federal government of the U.S. has the right to tell the citizens of Pennsylvania what to do. This is because the United States of America is a federal system of states in which a union of states have placed themselves under a centralized government authority. However, these states still maintain some level of autonomy.

For instance, the Tenth Amendment allows any powers not specifically delineated in the U.S. Constitution to go to the states. That's why, as a kid growing up in Pennsylvania, I had to wait until I was 16 to get my driver's permit, while my cousin in West Virginia got his when he was 15.

Since we've placed so much emphasis on the idea of the legitimate power and authority of a state, I think it'd be a good idea to take a little time and talk about how this legitimacy has historically developed.

According to many political historians, states developed over time as people groups grew in size and, therefore, need. For instance, a small clan of ancient hunter and gatherers had very little need for formalized laws or institutions. After all, they shared their resources, usually not recognizing private or personal property. Yes, they may have had a group leader who was looked up to, but his authority was not institutionalized and most decisions were made by group consensus.

However, as time progressed and most people groups moved from hunting and gathering to agriculture, the need for more formalized laws and leadership grew. For instance, there needed to be some way to decide who was allowed to farm where and whose sheep were whose. This led to societies developing leaders who held traditional authority or authority based on a tradition or deep moral code. A good example of this would be a tribal council setting up rules for the farming seasons and hunting practices.

As some societies continued to modernize and industrialize, and things like how to distribute resources and how to pay for the production of resources came into play, traditional authority was often replaced by rational authority. This is authority in which leaders are elevated by a system of law and given formalized power to enforce laws and policies. As people groups began to place themselves under this rational authority, and as boundaries between these groups were formalized, the concept of a state was born.

A state is an autonomous political unit, including many communities within its territories of which it has legitimate centralized power over. Adding to this, a state is sovereign. It holds supreme rule over its territory.

States developed as people groups modernized, moving from being more hunter and gatherers to agriculturalist, to even industrialism. As this occurred, traditional authority or authority based on tradition or deep moral code was replaced by rational authority in which leaders are elevated by a system of law and given formalized power to enforce laws and policies within a specific territory.

The centralized power of a state holds legitimate power or power coming from a formalized position or office. With this legitimate power, a state holds rational authority to use force to maintain order. This is often done by means of a structured police force and a standing army. This centralized power also holds a monopoly on ultimate authority and power.

Differing across the globe, many states are comprised of smaller states bound together by a federal system of states. This occurs when a union of states have placed themselves under a centralized government authority. A great example of this is the United States of America.

The Nature of Modern Wars & Conflicts

Influence of Geographic Factors on Politics in Europe

Sovereignty Concept & Kinds | What is Sovereignty?