Whereas, the U.S. Court of Appeals hears cases that involve:

Finally, the U.S. Supreme Court deals with cases that move up from a lower federal court and involve a violation of constitutional law. However, this court considers a limited number of cases.

The state court system works in a similar way in that there are, in most states, three distinct and separate courts that decide on different cases. The main difference between the state and federal court systems is in the kind of cases that are heard. 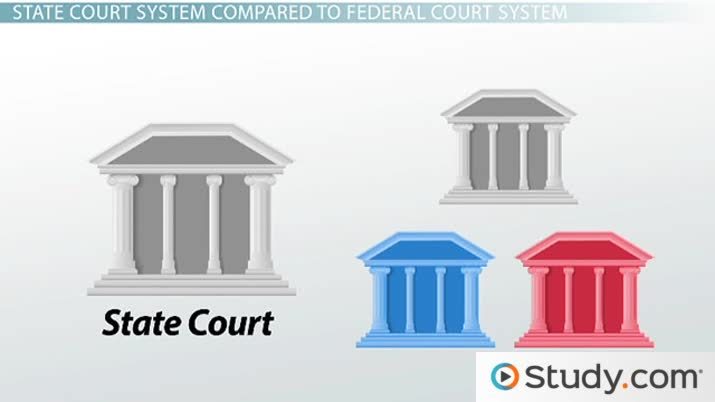 State courts have jurisdiction to hear just about any case. For example, state court cases may involve:

The three primary courts in the state court system are superior court, intermediate court of appeals and state supreme court.

Superior court deals with serious cases and most cases are heard in this court. There are also special courts under this umbrella, like family court and juvenile court.

Once a case is heard by superior court, either party to the case may appeal the decision of the court to the intermediate court of appeals in the forum state. The intermediate appellate court works similarly to the U.S. Appellate Court in that it has jurisdiction to hear a case from a lower court. But it does not consider the facts of the case in order to make a judgment. Only the application of law is considered. This means that if a case is brought to appellate court, the litigants cannot introduce evidence about the specific case. It can only challenge the judgment of the lower court based on whether the state law had been properly applied when rendering a judgment.

State supreme court is similar to U.S. Supreme Court in that it hears cases that question the application of law. This court hears cases where state law may be improperly applied, and the judgment is considered final. Unfortunately, the buck stops here as there is no higher state court to appeal to and is considered the court of last resort as it applies to questioning state law violations.

State Court Systems Do Not Operate the Same Way

We mapped out the similarities between the federal court system and the state court system.

However, it is important to note that although there is a generic system in place for a trial, an appeal and a judicial review of the application of law, each state has the power to exercise jurisdiction over specific types of cases as they see fit. For example, if a married couple were to get divorced in Hawaii, the proceedings would be held in family court, while a couple seeking the same dissolution of marriage in New York would duke it out in superior court.

There are also different criteria for a divorce in each state. The state of Hawaii requires no reason for the divorce, and parties did not have to be married in the state. The only requirement is that one of the parties must have been a resident at least six months prior to the filing date.

The state of New York requires that the parties had been married in the state, one or both parties be residents of the state and that at least one of the following criteria be met by one of the parties:

It is important to review the specific state court system in which one resides to better understand the court procedures.

Federal court has limited jurisdiction over cases with very specific criteria that must be met. State courts have broad jurisdiction and can try most cases, like criminal, contract, family and juvenile trials.

State superior courts have jurisdiction over most cases. When a party is dissatisfied with the decision of the lower court, he has the right to request an appeal from the intermediate court of appeals in that state. Similarly to the federal court of appeals, the case is heard based on a question of law and not on facts.

When all else fails, the disgruntled party may bring the case to state supreme court to have a decision from appeals court re-considered. This court is considered the court of last resort and is the final step in the state appeals process.

The specific operations of the courts differ between states. This means that from state to state, a different court may hear a case. We learned that in Hawaii, family court is the right venue for a divorce, while superior court is the place to dissolve a marriage in New York. This is why it is important to understand the specific operations of your state's court system.

After finishing this lesson, you should be prepared to: